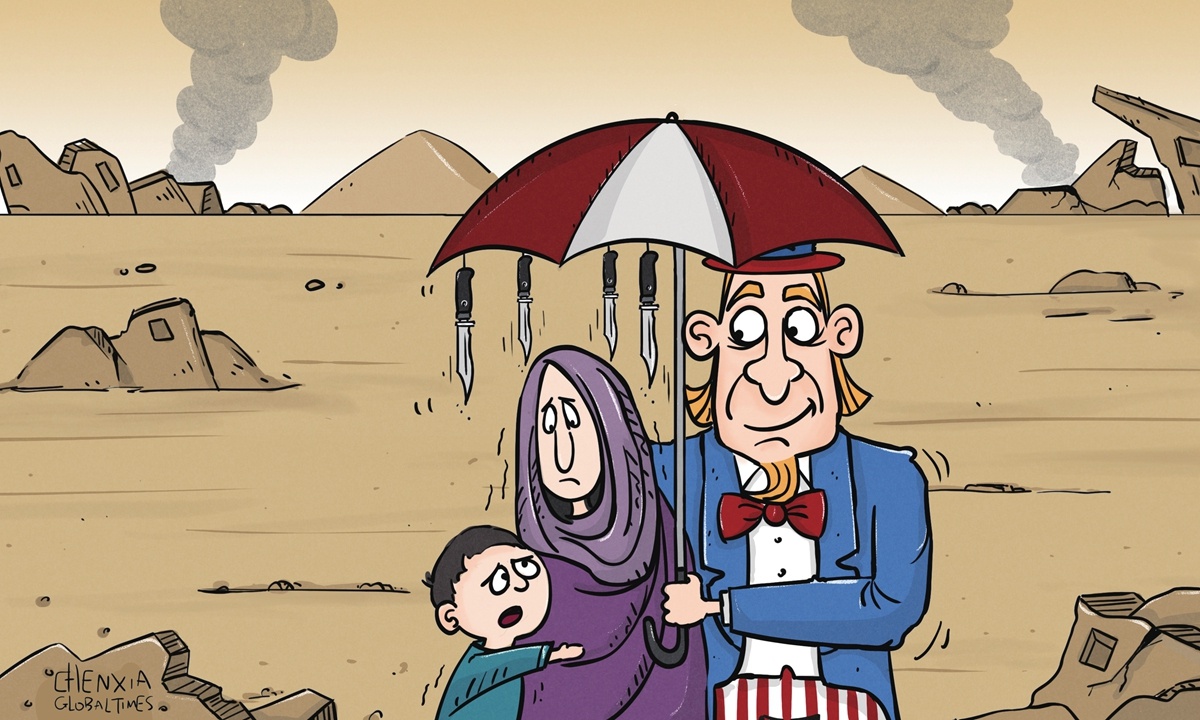 The most turbulent place in Afghanistan since the fall of the Afghan government has been not in Kabul the capital city but at the Kabul international airport.

For days, it has witnessed a déjà vu "Saigon moment," with the flood of Afghans desperate, even dying, to get out of their country through this one and only exit. Images of young Afghans hanging from the landing gear of an American transport plane falling like a broken kite, and a crying baby being handed to American troops over a barbed-wire fence are heart-wrenching. The tragic story of life and death is staged there every day, implying the growing tide of Afghan refugees after the sudden change of the situation in Afghanistan.

The problem of Afghan refugees is not a new one. Around 5 million people have fled the war-shattered country. At present, there are roughly three kinds of Afghan refugees. The first group includes refugees directly caused by war. The second group consists of those who fear being liquidated by the new government, including interpreters and support personnel once employed by the US military, as well as former government officials. The economic refugees who want to leave Afghanistan driven by poverty constitute the third group.

The new refugee crisis is directly linked to the political upheaval triggered by the hasty withdrawal of the US military. The collapse of the Afghan regime and the looming rise of a Taliban government have sparked fear among some Afghan people. After all, in the past the Taliban represented a large cultural gap with residents of big cities such as Kabul. As an armed wing, the Taliban achieved little in national governance, economic construction and diplomacy. This is why some people don't welcome the Taliban and want to flee Afghanistan at all costs, reflecting the profound nation-building crisis in Afghanistan.

The US military occupation has exacerbated the economic difficulties in Afghanistan and foreshadowed the refugee crisis. The past 20 years have been Afghanistan's "lost decades." The US has been a destroyer instead of a builder. They occupied the country, not to rebuild it, but purely for hegemony and geopolitical ambitions. The US occupation did nothing to help Afghanistan with infrastructure, agriculture and industry, but increased its economic dependence, fostering a dysfunctional economy reliant on external aid and rife with clientelism, nepotism and corruption.

In the past 20 years, Afghanistan's economy has barely developed. Most of the national economy and fiscal revenue comes from foreign aid and services industry brought by NATO's military presence. The withdrawal of US troops and a corresponding cut in aid would put the Afghan economy in risk of collapse.

Therefore, the key to resolve the Afghan refugee issue lies in the smooth political transition and economic reconstruction in Afghanistan. It is a pressing matter at the moment to form an inclusive government and initiate the national reconstruction. At the same time, it is equally important for the international community to help in a timely manner.

Regrettably, in the face of the looming tide of Afghan refugees, the US and the West began to shirk their responsibilities and attempt to make other countries scapegoats. Data from the US State Department shows that the US has accepted fewer than 500 refugees from Afghanistan this year. Fearing a repeat of the 2015 refugee crisis from Syria, European countries have also been hesitant to accept Afghan refugees.

Even more ludicrously, some politicians have begun to urge for shared international responsibility, calling on Afghanistan's neighboring countries to open their borders. It should be made clear that even though aid to Afghanistan is a shared responsibility of the international community, such responsibilities are conditional: Whoever caused the trouble is responsible to solve it.

The US and the West created the chaos in Afghanistan and are directly responsible for it. They cannot simply walk away and leave the mess to the Afghan people and its neighbors. This will make it difficult for Afghanistan to become self-reliant in the indefinite future and will also put a heavy burden on regional security and development.

After decades of foreign occupation, Afghanistan is back in the hands of the Afghan people. This war-torn country has come to a historical turning point. An Afghan-led and Afghan-owned peace process is of great significance.

In keeping with the trend of the times, major political forces in Afghanistan should lead the political transformation and economic reconstruction of the country. The international community should be more patient and show more support to the Afghan people to cope with the multiple challenges they have to face.

The author is a professor at the Middle East Studies Institute of the Shanghai International Studies University.