OPINIONS The US isn’t ready for shared bikes

The US isn’t ready for shared bikes 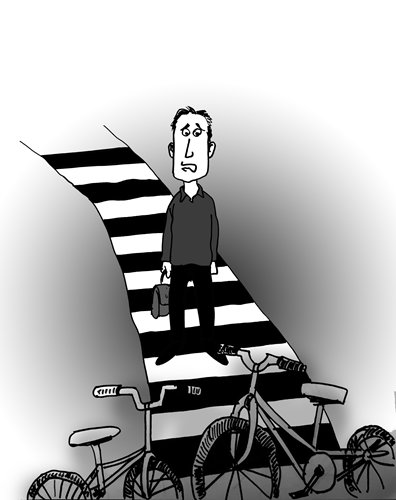 When I sat down in December to have a holiday beer or two and my American friends found out I live in China, they all wanted to talk about the same thing - bicycles. The Chinese shared bicycle apps are invading American cities, and my American friends, tickled by the idea, wanted to know how they've worked out in China.I told them I have mixed feelings about the bike revolution in China's big cities and some worries about how they'll translate to American cities. When the bikes first appeared on the streets of Shanghai, they were greeted with open arms by almost every Westerner I know. The idea of being able to cheaply and easily bike everywhere without worrying about theft or convenience seemed great.Then came the reality of millions and millions of bikes in a relatively small urban area. People dropped the bikes everywhere: on streets, on bridges, on footpaths and in tunnels. I saw a bike in the pond at my local park. The bikes tended to end up in heaps, blocking pedestrians and making parking electric bikes and motorcycles almost impossible in certain parts of Shanghai. The authorities responded by creating massive graveyards of confiscated bikes. Bigger, more responsible companies, like Ofo, responded by sending out truckloads of workers at night to straighten out the bikes and make sure they are parked in appropriate places. Will that work in America? As of January 1, the minimum wage for workers in most American cities is about 98 yuan ($15) per hour. American bike companies may not be able to afford to do what Ofo is doing.In China, Shanghai, Guangzhou and Beijing all have an important geographic trait in common. They're relatively flat and have well-planned neighborhoods. Not many American cities are so well suited for bikes. San Francisco and Seattle are full of brutal hills. Los Angeles is too spread out for bike travel, New York too compact. Houston is too disorganized, Chicago too windy. Some of the flatter cities where bikes could work have issues too. For example, no one is going to want to bike in Phoenix when it's 43 degrees outside or in Minneapolis when there are two meters of snow on the ground. There's also the phone issue. The shared bike system in China is dependent on users having a quick, easy way to use their phone as both a satellite link and a financial device. That reality is far, far away in the US. Finally, there's safety. I've been riding an electric bike in Shanghai for over three years, and the shared bike phenomenon has changed the experience. Many inexperienced riders now crowd the streets, and the result is a lot of dangerous, unpredictable behavior. In the US, with no recent history of bikes as an important mode of transportation, it's going to be worse.