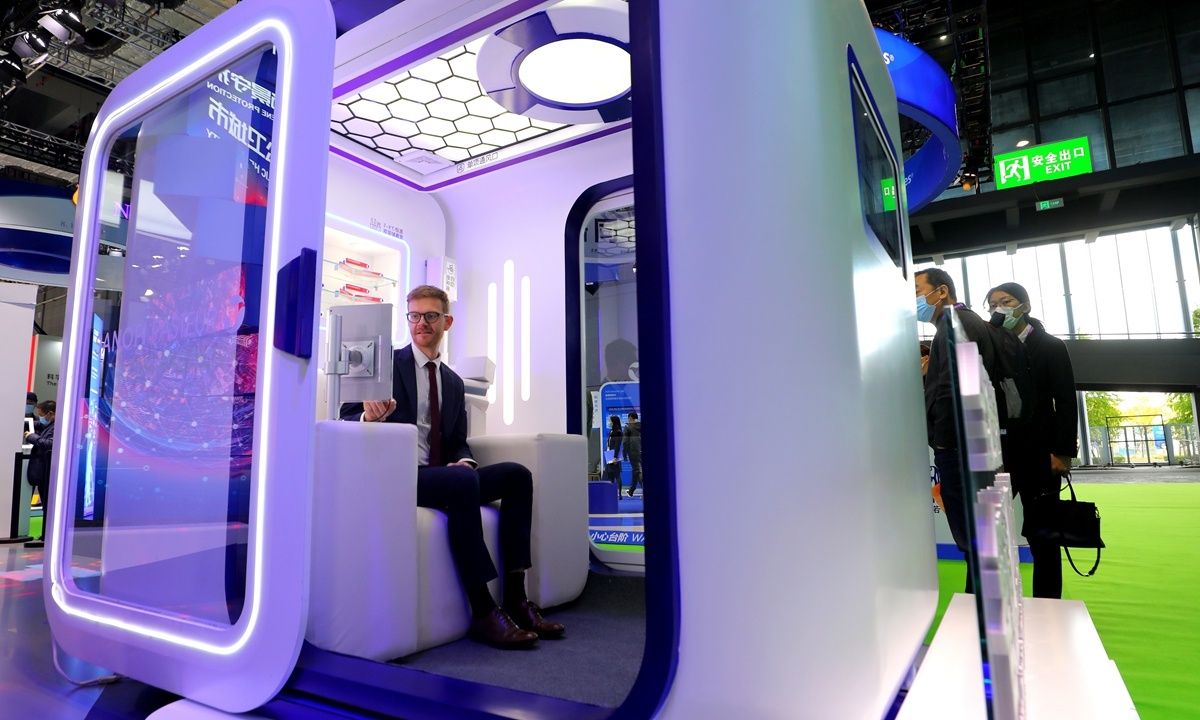 A smart unmanned vaccination capsule made by French multinational pharmaceutical company Sanofi makes its debut on Thursday during the third China International Import Expo (CIIE) in Shanghai. When a sudden epidemic or seasonal vaccination period arrives, the rapid deployment of a large number of such chambers can effectively alleviate the huge pressure on the clinic. (Photo: Global Times)

The third China International Import Expo (CIIE) took place under unprecedented circumstances. The more the pandemic persists, the less easy it is for people to travel. The impact of the virus on people-to-people exchanges is tremendous. Of course, adaptation to new realities is necessary. China has already prevented a second wave and it has returned to what might be called a post-COVID-19 relative normalcy. It remains highly vigilant, though. The organization of the third CIIE is placed in this context.

Safety remains the top priority. Tough measures have encompassed obligatory nucleic acid tests for participants and staff, a strict protocol for travelers such as a 14-day quarantine at designated hotels and disinfection of imported items. In parallel with the protection of public health, this year's exhibition has naturally added a special category covering the novel coronavirus with emphasis on scientific prevention techniques. SGS, for instance, a Swiss testing and inspection company, is showcasing its innovative services allowing for quick testing to be done in public spaces. Results are delivered in approximately 15 minutes. And the American Dun & Bradstreet Corporation will present its new index that sketches out how the virus influences the position of an interested enterprise in the supply chain network.

The 2020 CIIE also differs in comparison to the previous two exhibitions of 2018 and 2019 because its content has largely been acquired online. This change allows international companies that cannot currently be present to virtually promote their products and services. It also exhibits the inauguration of a new era where more and more activities will have to be played out in the internet sphere. No doubt, the digital economy is the "winner" of this pandemic.

On the contrary, what remains stable during this year's CIIE is China's commitment to realize and improve its opening-up process. Paying close attention to the speeches President Xi Jinping gave in 2018, 2019, and 2020, he monitors, every time, progress made in relation to previous pledges. These comprise a gradual lifting of barriers for foreign investors to access the Chinese market. Foreign ownership caps on securities, fund management, futures, life insurance companies and commercial vehicle enterprises, for example, have been removed this year.

The participation of several international companies in the 2020 CIIE, including Fortune Global 500 corporations, symbolizes the continuation of globalization in day-to-day trade and commerce. China actively supports economic globalization and considers it an irreversible trend. It acts in line with its national priorities to not only strengthen its collaboration with the external world, but also unleash domestic demand and achieve self-sufficiency in all sectors - if possible.

To better understand China, it is always important to look at the country itself. Giving his recent address, President Xi mentioned that total imports into China are estimated to top $22 trillion in the coming decade. This means that the country will not refrain from boosting its imports. But these imports will, rather, be tailored according to the country's needs, in particular, its interest in further supporting innovation domestically. This is also the case for the foreign direct investments that will be made in the following years.

Quality matters for China. High standards do, too. Interaction with the outside world will continue and increase. The new component will be the specification of this type of economic relations in the post-COVID-19 world. The objective of building a modern country by 2049 requires synergies driven by wise and ambitious decisions.

The author is a lecturer at the European Institute in Nice, France.