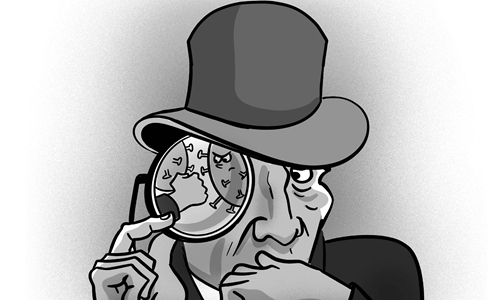 At a critical moment when global cooperation is direly needed to fight the novel coronavirus pandemic, some Australian media outlets and personnel have been fabricating facts, groundlessly accusing China of being responsible for the spread of the virus and demanding China pay for the losses the pandemic would cause to the world. One notorious example is radio shock jock Alan Jones, who has been sending wrong and misleading messages with lies and unfounded accusations about China since the global pandemic reached Australia.

On his program on Friday morning, Jones attributed Australia's shortages of medical supplies to purchases by two Chinese companies in early February. He also accused China of resuming wet markets without additional rules or regulations and with fruit bats "still on the menu." Previously, he claimed on-air that China "brought this disaster [coronavirus pandemic] onto what is now the world economy," suggesting China be excluded from bidding for devaluated assets around the world and pay compensation for the global spread of the COVID-19.

He is telling tall tales to demonize China. China was facing a plight of inadequate medical supplies at the early stage of the epidemic, and it was understandable and beyond reproach that it had to import from other countries. Any country ravaged by the epidemic would do the same. As the coronavirus rages on globally, many countries and regions are calling on China to provide them medical supplies such as masks and protective outfits, and to send expert teams to help them combat the pandemic.

As for the wet markets, if Jones ever had spent time researching, he would have found that China is tightening regulations and supervision. Where do his accusations come from?

Some senior Australian and US officials didn't take the epidemic seriously after it broke out in China. They thought the virus would not come to plague them. That's why we didn't see any sympathy or assistance offered from right-wing forces in Australia and other Western countries to China. Instead, they took pleasure in China's misfortune. When China locked down Wuhan, making great sacrifices to fight the virus and prevent it from spreading to other countries and regions, they accused China of "human rights violations." Although now they have found that the virus is not targeted at any specific country or people but a danger to all, what they are doing is not looking for effective measures to contain it, but placing blame on China and making the country a scapegoat.

What's the source of the novel coronavirus? There has not been a conclusion. The question should be left to the scientists to answer. The pandemic shouldn't be politicized. Otherwise, the public will bear the consequences and suffer. Many Australians have realized this. They demand that the Australian government and health authorities learn from China's approaches, communicate with their Chinese counterparts and invite Chinese medical professionals to share their experiences.

It's suggested the so-called opinion leaders in Australia listen to these appeals. Unfortunately, they selfishly put their own interests above public health and security. The only way to defeat the coronavirus is to be united. From the perspective of professional ethics, in the face of the natural disaster all are confronted with, everyone should promote cooperation to jointly cope with the crisis. But you will never wake up a person who pretends sleeping.

In the Western world, some right-wing forces will continue to demonize China. They are making a big deal of the pandemic. Even if there were not the virus, they would find other excuses to attack China. Smearing China has become a habit and routine. What China can do is continue to properly manage the epidemic, actively share the latest development of the situation and experiences with other countries. This will slap those Chinese attackers.