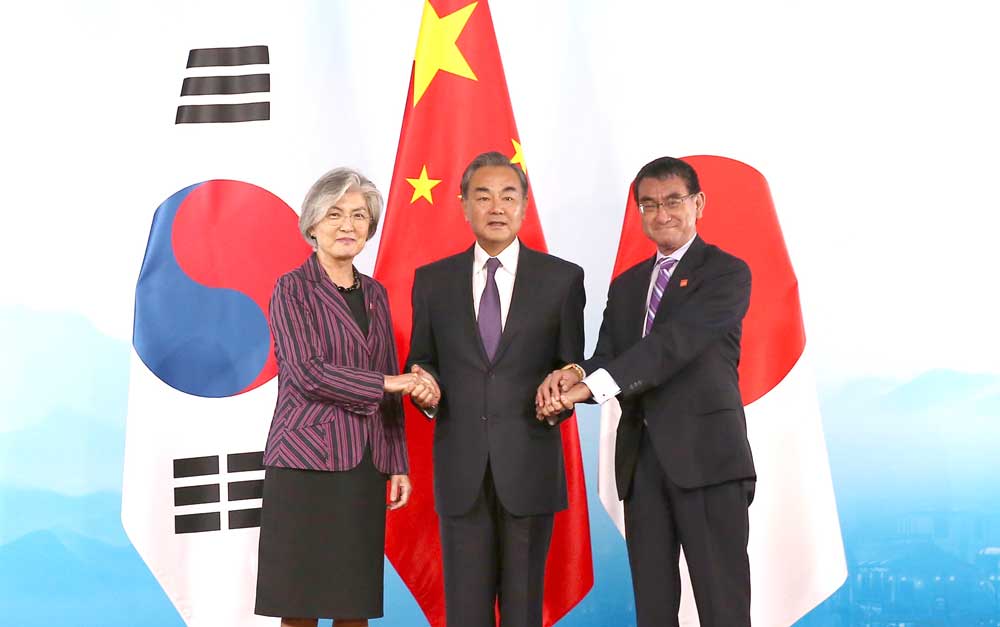 The ninth China-Japan-Republic of Korea foreign ministers' meeting was an inspiring sign that the three Northeast Asian neighbors share a common will to maintain regional stability.

That the meeting materialized while Tokyo and Seoul are embroiled in a fierce trade standoff indicates neither wants their current spat to get in the way of joint endeavors to sustain the region's growth momentum. The broad consensus among the three countries came as a timely boost to the otherwise dimming prospects of trilateral cooperation.

If, as the foreign ministers agreed, the three countries can work together to facilitate completion of the negotiations on the Regional Comprehensive Economic Partnership and hold a successful summit of the leaders of the three countries by the year's end, that would be remarkable progress.

These would be accomplishments that would not only serve to repair the strained ties between Japan and the ROK, but also demonstrate solidarity indispensable for their ambitious vision of an "East Asia Commonwealth".

While the prospect of such a commonwealth remains rather distant at this point, the consensus the three parties reached in Beijing on various aspects of trilateral cooperation and regional integration covers plenty of immediately operational projects, whose implementation will surely inject fresh vitality into the now 20-year-old cooperation mechanism.

Beijing's idea for the three parties to enhance collaboration on big data, artificial intelligence and 5G, for instance, may not only help Tokyo and Seoul end their present standoff, but present itself with some resources increasingly inaccessible elsewhere.

The protectionist and self-centric approach of the United States to international trade and traditional multilateral cooperation mechanisms has created tremendous uncertainty in the global economic landscape. Which in turn puts all trade-dependent nations in danger. Not to mention that all three countries have found themselves in trouble with the US to varying degrees when it comes to economic and trade ties.

Beijing's call for the three to offer certainty to the region and beyond is an opportune one given that volatile backdrop. The conceptual document they come up with on "China-Japan-ROK+X" cooperation is a well-thought-out prescription under the current circumstances. It may see even greater potential once incorporated with the Beijing-proposed Belt and Road Initiative.

The only question now is how far they can go together down that path.