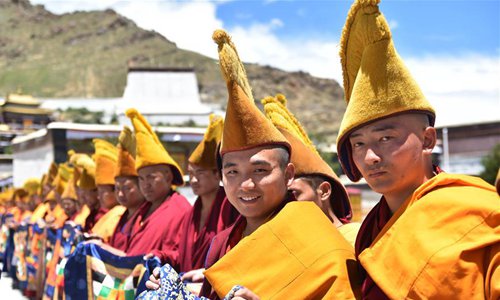 Tibet regional authorities have published a series of articles urging the public to completely understand the 14th Dalai Lama's "reactionary essence in politics," "hypocrisy in religion" and fraudulence in his tricks.
The 14th Dalai Lama is the prime culprit of separatist political groups pursuing "Tibet independence," the loyal tool of international anti-China forces, the root cause of riots in Tibet, the biggest obstacle for Tibetan Buddhism to establish normal order and a politician under the disguise of religion, according to the articles.
"We've got to see that the 14th Dalai Lama changed his tricks but stay unchanged in his reactionary essence to pursue 'Tibet independence.' He played tricks in an attempt to separate his country and turn back the wheel of history, which is bound to fail," read one of the articles.
The justice department of Southwest China's Tibet Autonomous Region posted three articles on its WeChat account from Monday to Wednesday. The articles were first published on the front page of Tibet Daily from December 12 to December 14.
The US Congress passed legislation on December 11 demanding access to Tibet and other Tibetan areas for US diplomats, journalists and tourists. US President Donald Trump signed the Reciprocal Access to Tibet Act into law on Wednesday.
"It's not surprising that we denounce the Dalai Lama, as it's a must at any time in Tibet for regional stability and unity," Zhu Weiqun, former head of the Ethnic and Religious Affairs Committee of the National Committee of the Chinese People's Political Consultative Conference, told the Global Times on Thursday.
"But it's important to raise public awareness of his moves at a moment when Western countries including the US increased pressure on China which in the Dalai Lama's view would be an opportunity for his separatism," Zhu said.
Zhu warned that the Chinese government has to take into consideration that the Dalai Lama may stir up some troubles, as next year will be the 60th anniversary of the Dalai Lama fleeing China.
Xiong Kunxin, an ethnic studies professor at Tibet University in Lhasa, told the Global Times on Thursday that publishing articles criticizing the Dalai Lama is also needed for the establishment of correct religious values in line with the Marxist view of religion.
"The Dalai Lama has a certain influence on some people who don't know the truth and revealing and criticizing him could let these people sharpen their eyes," Xiong said.