Time magazine cover mirrors bleak abyss US is leaping into 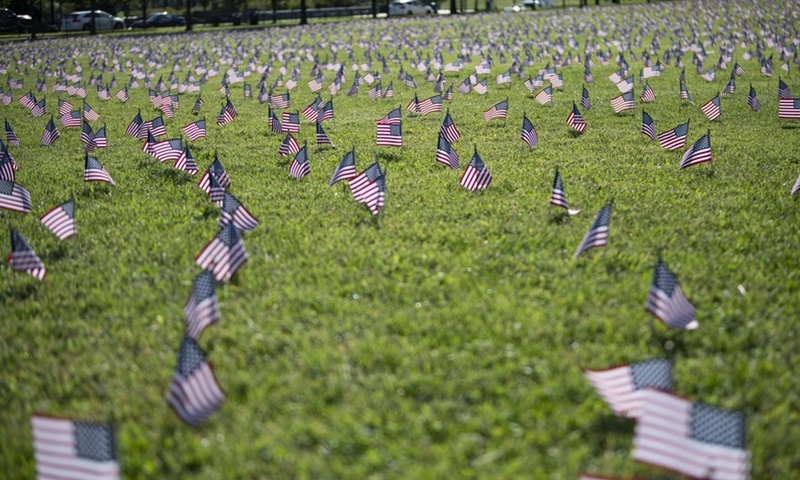 US national flags representing the 200,000 lives lost to COVID-19 in the United States are placed on the National Mall in Washington, D.C., the United States, on Sep 22, 2020. US COVID-19 deaths surpassed 200,000 on Tuesday, according to the Center for Systems Science and Engineering (CSSE) at Johns Hopkins University.Photo:Xinhua

With only a little more than 20 days to go before the end of 2020, Time magazine on Saturday revealed on Twitter the cover of its latest edition. The cover shows "2020" with a red "X" through it and the words "THE WORST YEAR EVER" on it.

The vast majority of Chinese people do not agree that 2020 is "the worst year ever." Through this year China has indeed undergone the "unbearable weight of being," to turn a phrase from Czech writer Milan Kundera's book The Unbearable Lightness of Being. This year, China saw more than 86,000 people on the Chinese mainland become infected with COVID-19. Tragically, 4,634 of them died from it. But we finally have managed to overcome the odds. We successfully put the epidemic under control and restored people's normal life across the country, albeit with a new normal of face masks, hand sanitizers, social distancing, and tracing apps.

COVID-19 has brought a lot of suffering. But we have turned it around to make measured gains, drawing on lessons from introspection so we Chinese can move forward more firmly.

Even on Twitter, Time's new cover doesn't resonate. Within over 400 comments made about Time's tweet since its release on Saturday, few agree with the cover. Stephanie Zacharek, the author of the cover article, really means it though. After all, the still increasing shocking numbers of COVID-19 infections and deaths in the US are reminding Americans that their nightmare is not over yet. No matter how the politicians downplay the disease, no matter how hard they pretend that everything is going well, or how they dumped responsibilities onto other countries, ordinary Americans have to face real losses.

The coronavirus fight in the US is a disaster. This has caused America to lose its reputation. And now the situation in the country is going out of control. The US is becoming a living hell, while most other Western countries cannot be optimists either. Time magazine is largely an American-centric publication, so it is understandable that it thinks 2020 has been very bad. But has it looked closely at every country in the world? Even bothered to talk to them?

Supposedly one reason is that the Western elites who steer public opinion still believe the West - more precisely the US - is the world's center. Narrow-mindedly and egotistically, they have projected their tragedy onto the rest of the world.

In every case, if these arrogant Westerners would take a good look at the other side of the globe - East Asia, Southeast Asia, and Africa - they will find totally different scenarios. As renowned British scholar Martin Jacques put it on Sina Weibo on Monday, "Much of the world is doing better than ever before… and many other regions will testify."

Time's petty cover has once again revealed a crux. That is, the severest problem for the US and the West as a whole is this: They refuse to face their problems squarely. Moreover, when there is a major problem, they don't focus on solving it. They instead seek to pull others into the same mire, hoping that by doing so their own problems will disappear. However, this is a bad idea. It will not stop them from pushing themselves further into a darker abyss.

One has to bear the fruits of the seeds one sows, even if the fruits are bitter. If the West cannot change its egotistic mind-set, then every coming year in the future might become another worse year. The US feeling that 2020 was the worst is the result of contrasting expectations - and a belief that their system could save them.

Zacharek wrote, "Our most debilitating threat this year was a sense of helplessness, and it ran unchecked." Such a feeling, fundamentally, depends on where she lived. It is believed that most people who spent 2020 in China will agree: This year has been tough, but never helpless.

Time magazine and other Western elite publications (not to mention individuals) which mislead the public should put aside their arrogance and narrow-mindedness as soon as possible. As one Twitter user commented, "No doubt it was a legitimately brutal year for SOME people, but only someone who's lived in comfort their whole lives could write an article like this [in the Time]."

The author is a commentator with the Global Times. opinion@globaltimes.com.cn