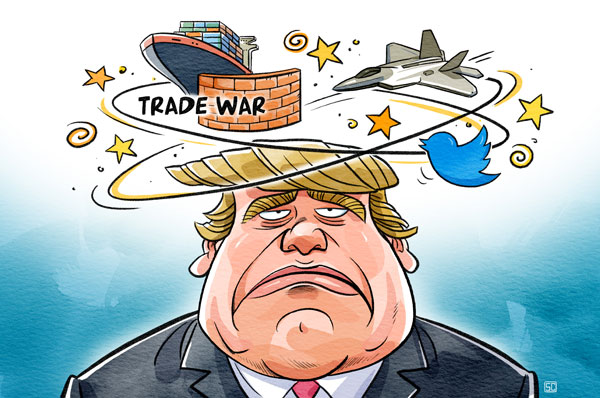 US protectionism and the subsequent trade disputes are calling into question the very nature of the World Trade Organization. And the persistent criticism of the Bretton Woods institutions (the International Monetary Fund and the World Bank) suggests the global economy strongly needs updated or new organizations. After all, we have already witnessed the rise of BRICS (Brazil, Russia, India, China and South Africa) and the G20, and emerging powers' and developing countries' claim for better and fuller recognition.

So what can be done?

The most powerful of them all and somehow a symbol of Western neoliberal hegemony is the IMF. Its "structural adjustment programs" were not good prescriptions in regions as diverse as South America, Africa, Eastern Europe－Greece has fresh and painful memories.

A functioning market economy can survive if it has strong institutions, which is often not the case in former colonies or communist states. Moreover, emerging countries are still underrepresented. The total BRICS' voting power in the IMF system is 14.18 percent while the five countries' overall GDP represents about 23 percent of the world economy. In the IMF, China has less voting power than Japan, and India less than Italy. Despite an earlier quota revision (2010), such a system cannot claim to fairly represent world economic relations.

There are even more substantial issues. Developing countries (including in Africa, where some economies such as Ethiopia, the Cote d'Ivoire, Senegal and others are growing at breakneck speed) urgently need infrastructure, especially in the energy and transport sectors, which are crucial to create opportunities to economically and demographically booming countries.

While the IMF has usually emphasized short-term loans, privatizations and price stability, China has repeatedly demonstrated the ability to build infrastructure facilities, and can provide a development "model" better suited to the interests of African, Asian and South American economies.

And even if the IMF has included the renminbi in the basket of its reserve currency assets (Special Drawing Rights), it remains a bulwark of US dollar hegemony, a fact which gives Washington global political and economic primacy.

Similar considerations apply to the World Bank, which has a more socially-oriented mandate. Despite its emphasis on health, education, good governance, capacity-building and the environment, the World Bank has hardly departed from IMF's neoliberal policies.

Open-minded Western scholars and leaders have recognized the need for plural development models and institutions. The China-led Asian Infrastructure Investment Bank, established in 2015, includes European countries as members such as Germany, France, Italy and Britain, as well as Australia. The World Bank, the AIIB and the New Development Bank should and can cooperate. They are complementary rather than mutually exclusive. So the United States, which has not joined the AIIB, should rethink its development policies and the relevance of the West-centric global institutions.

The WTO is a relatively new organization－it was founded in 1995 in the roaring days of globalization, though mainly on European and US impulse. US President Donald Trump's protectionist measures can be understood because the US has long been facing industrial decline and unemployment.

Yet we cannot go back in history and endorse protectionism, punitive tariffs, retaliations, and their nasty consequences. Europe cannot forget the lessons of the years before World War II. Also, the WTO exists as a forum for debate and has a dispute settlement body to which trade disputes should be taken.

The European Union, China and other emerging or developing economies should continue and in fact increase trading. Interestingly, the US seeks protectionism for its own industries but urges other countries to open up their economies. This is not really a fair approach.

Moreover, Western economies already enjoy the benefits of controversial measures such as agricultural subsidies, which have traditionally allowed European and US farmers to set lower prices and fight off competition from developing countries' cheaper agricultural produce. It is time to enact truly global and fairer trade rules rather than returning to harmful "trade wars".

To summarize, it is clear that both national and global politics have been noticeably missing for at least a couple of decades and key global institutions have to be reshaped to become more inclusive and powerful. Otherwise, we will have to increasingly choose between an unbridled global economy and unbridled nationalism－clearly a "lose-lose scenario"－which the 21st century world cannot afford.

Ernesto Gallo is an honorary research associate at University College London, and Giovanni Biava is an energy and gas consultant at Exelen group.