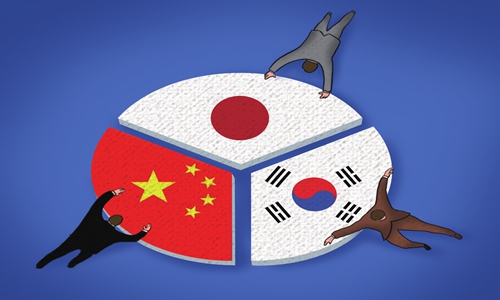 The China-Japan-South Korea trilateral summit will be held Tuesday in Chengdu, capital of Southwest China's Sichuan Province. Specific topics are set for every summit, but whether the three countries can constantly move closer is unclear.

Over the past decade or so, Northeast Asia has achieved rapid economic growth and trade among the three countries has continued to expand. But during this period, acute problems emerged in bilateral ties, hampering trilateral cooperation and causing the summit to come to a standstill for some time.

This should be attributed to both internal and external reasons. The impact of the Korean Peninsula issue on China-Japan-South Korea cooperation has been discussed more often than not. But the US factor has obviously exerted more influence. The US not only is a powerful gravity field, but also has levers that directly affect Northeast Asian affairs. Washington is capable of interfering in China-Japan-South Korea relations visibly or imperceptibly.

The majority of international politics scholars hold that the US is unwilling to see a close relationship between China, Japan and South Korea. The three Northeast Asian countries regard establishing a free trade zone as a significant goal for deepening cooperation. But it is generally believed that before a free trade deal is reached between the US and Japan, Washington is reluctant to witness Beijing and Tokyo build such a relationship. The US would also be happy if a free trade agreement between the three Northeast Asian countries is put off.

The three countries happen to have some enmities that may deeply affect national sentiments. The US can thus take advantage of such enmities to increase the three's entanglements.

The US has its own national interests and there is no need to make any value assessments in this regard. But China, Japan and South Korea should be well aware of the geopolitical environment their trilateral cooperation faces and thus gain more initiatives.

All the three countries will prioritize their relations with the US. This is a realistic choice. However, strengthening China-Japan-South Korea cooperation will in fact help their ties with the US, as good trilateral cooperation will serve as a lever for each country to win more respect from the US. The legitimacy of their cooperation is enough to resist US pressure.

No essential clash of interests exists between the three Northeastern countries now, and many of their specific frictions have been amplified at the collective psychological level. In fact, the three countries have already formed an interdependent benefit-based relationship. If their cooperation goes on well, Northeast Asia can continue to stand out in global development.

China-Japan-South Korea cooperation is the key to setting the stage for signing the Regional Comprehensive Economic Partnership (RCEP). On the basis of RCEP, a higher level of free trade between the three countries will greatly consolidate the leading role of their cooperation in Asia's development.

The world is undergoing profound changes, and changes in the environment will have subtle effects on many countries' identities. Who am I? Who are my neighbors? What are my interests? Answers to these questions will inevitably produce a new dimension due to the changing times. Chinese, Japanese and South Korean societies should never turn numb in facing these major issues.

During the Cold War era, the bipolar world shaped countries' interests and self-awareness. The position of a country at that time seemed decisive. In the current globalized world, a country's path has become much more complicated. Each country needs to be of a more independent mind, bear more responsibilities for its own destiny, explore more positive factors for its development from the geographical environment and global relations, and make the best of them.