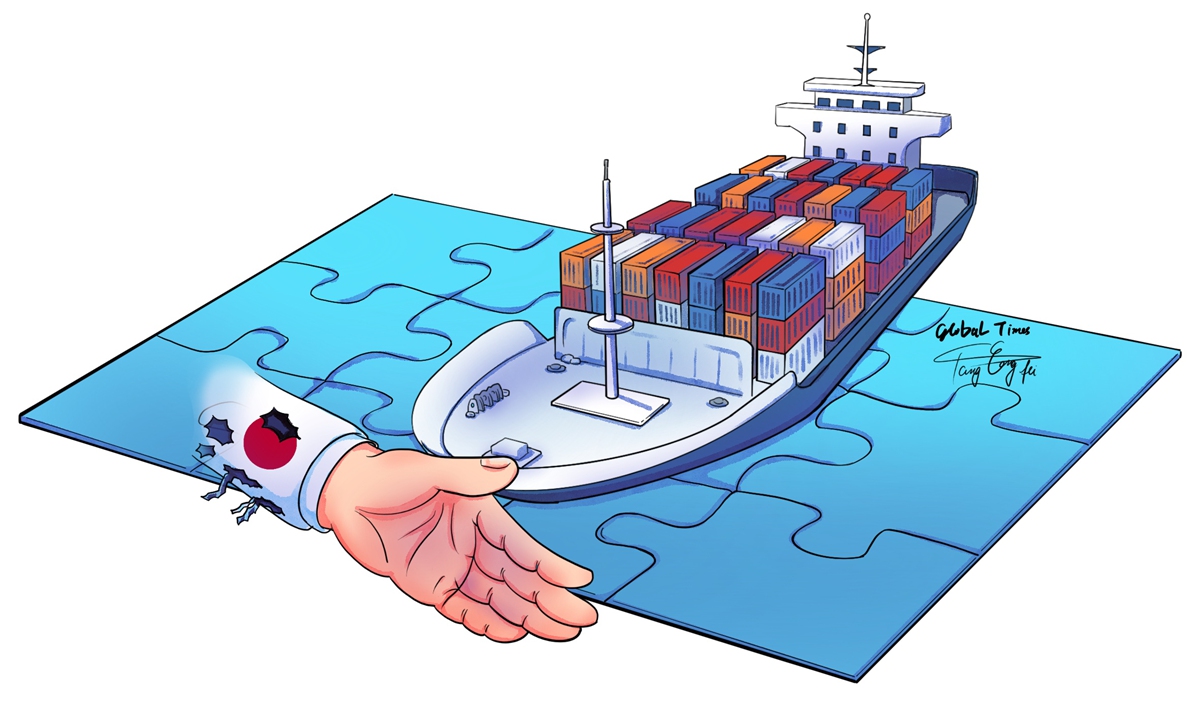 Several Western media outlets have in recent weeks published articles criticizing a "surge" in anti-Japan sentiment among the Chinese public. The Voice of America, the propaganda arm of the US government, went even further, asserting, in an article on its Chinese website on Wednesday, that the Communist Party of China "manipulated" public opinion against Japan for the purpose of exerting pressure on Japanese enterprises doing business in China, hoping to "indirectly influence" Tokyo's unfriendly policy toward China.

Such an assertion is an outright lie that came from nowhere. It should be noted that it is Japan's own provocative words and deeds that stoke up dissatisfaction among some Chinese netizens toward Japan. In the internet age, this dissatisfaction is amplified, seen by some foreign media outlets as a "surge in anti-Japan sentiment."

History is always a neuralgic issue in China-Japan relations. If Japanese politicians don't want to infuriate Chinese netizens, they should be careful in handing China-related topics, but obviously that's not on their minds. On the contrary, they constantly and recklessly challenge China's core interests and therefore the feelings of the Chinese public.

The latest example is Japan's aggressive posture on the Taiwan question. A so-called cross-party delegation of Japanese lawmakers cobbled together with two former Japanese defense ministers, a former vice defense minister, and an incumbent member of the House of Councilors arrived in China's Taiwan island on July 27 to begin a four-day visit, just several days before US House Speaker Nancy Pelosi's Taiwan visit. After Pelosi's visit, Japan joined a G7 joint statement expressing concern over China's response to the US politician's trip, which prompted China to cancel a bilateral meeting between the Chinese and Japanese foreign ministers on Thursday.

Japanese politicians' provocation over the Taiwan question is just one example of the events that stir up the so-called anti-Japan sentiment among Chinese public. If Japanese enterprises doing business in China feel any unease about the sentiment and worry about their future development in the Chinese market, Japanese officials are entirely to blame. Their behaviors are 100 percent responsible for any disruptions to bilateral economic cooperation.

As the world's second and third largest economies, bilateral trade between China and Japan is huge and growing rapidly. In 2021, bilateral trade increased by 17.1 percent year-on-year to reach $371.4 billion. Investment between the two countries has also grown considerably in recent years, becoming more diversified and expanding into more fields, including IT, finance, communications and more new business models.

The development potential of China-Japan economic and trade cooperation is huge, and it has always been the "ballast stone" and "propeller" of the relationship between the two countries. China has always been willing to deepen mutually beneficial economic cooperation with Japan and welcome Japanese enterprises to invest and set up factories in China. It is hoped that the Japanese side can also cherish the good momentum of economic and trade development between the two sides, work with China to tap the potential of cooperation, cultivate and create new growth points, and continue to expand common interests.

However, it is regrettable to see the current Japanese government's stance toward China has become increasingly hostile and provocative, and it has coordinated with the US in some industrial policies, causing a negative impact on the development of China-Japan economic and trade relations. In the first half of the year, the trade volume between China and Japan was $177.1 billion, down 2.1 percent year-on-year.

At the moment, it is not surprise that US media outlets is hyping up the so-called anti-Japan sentiment in China in attempts to drive a wedge in China-Japanese economic and trade relations, because although the US and Japan are military alliances, they are economically competitive. If Japan continues to cooperate with the US to contain China, US companies may immediately seize Chinese market share from Japanese companies.

Kong Xuanyou, China's ambassador to Japan, emphasized in May that Japan should avoid placing restrictions on normal economic, trade, scientific and technological cooperation on the grounds of economic security, and should maintain a fair and open trade and investment environment, and maintain the security and stability of the industrial chain and supply chain.

Japanese politicians should remain sober and work on addressing issues that hinder the continued development of bilateral relations, instead of undermining the political atmosphere for economic cooperation and hurt the feelings of the Chinese people.