Tough Brexit road ahead for Johnson

By He Yun | China Daily 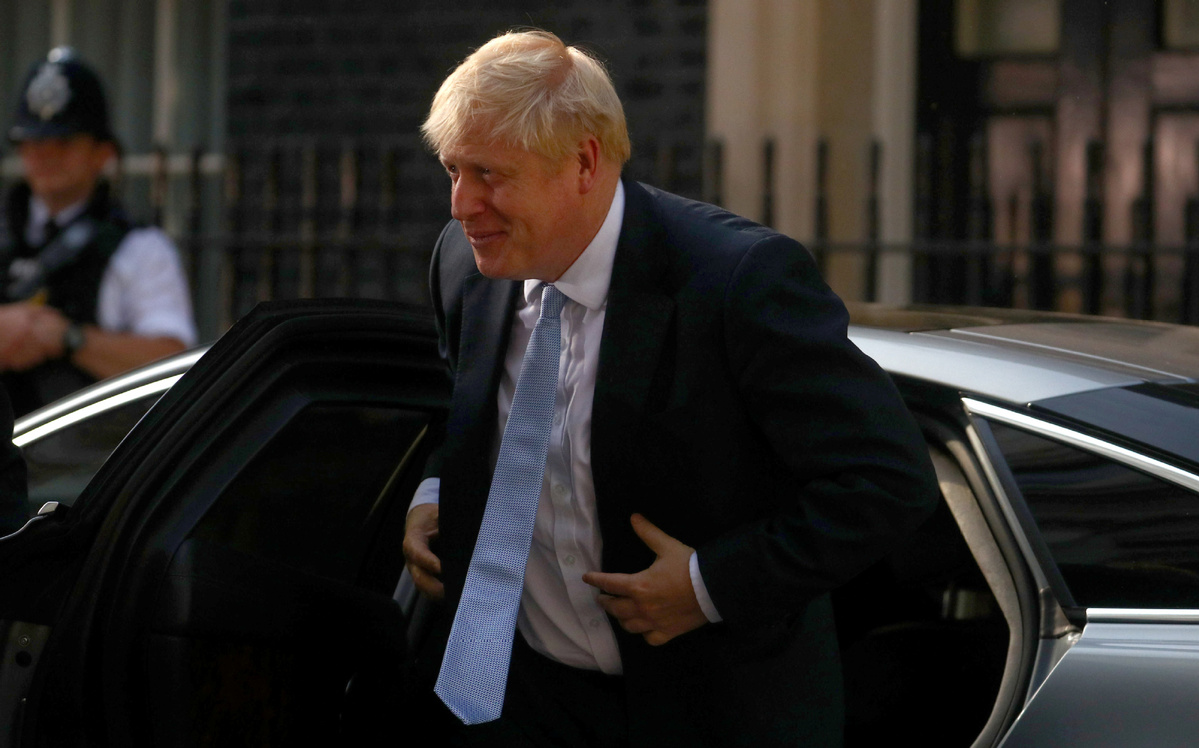 On his first day as British prime minister on Thursday, Boris Johnson told Parliament that he hoped the European Union would rethink its refusal to make any changes to the Brexit deal. Stressing that no "self-respecting" country could accept the "withdrawal agreement", Johnson said that with energy and optimism, the EU could be convinced.

But, he added, if Brussels couldn't be persuaded to do so, "we will of course have to leave ... without an agreement". He stressed that Britain is better prepared for that scenario than many would like to believe, but more work has to be done for that outcome. "In the 98 days that remain to us, we must turbo-charge our preparations to make sure there is as little disruption as possible to our national life," Johnson said, referring to the Brexit deadline of Oct 31.

After winning the Conservative Party's leadership election on Tuesday and a day before he was sworn in as the prime minister, Johnson had vowed to deliver Brexit, unite the country, energize the economy and defeat the opposition Labour Party leader Jeremy Corbyn.

But will this "can do" spirit help Johnson bridge the divide in the country and overcome its external challenges?

The Brexit impasse has already cost the Conservative Party dear in the local elections as well as the European Parliament election, which eventually forced Theresa May to resign as prime minister. Yet it is still unclear how Johnson will break the impasse.

As an ideal opposition party leader, Corbyn didn't waste time in reminding the members of Parliament on Thursday that Johnson backed May's Brexit deal, saying: "Can he explain this flip-flopping?" And quoting US President Donald Trump's remark that Johnson was "Britain's Trump", Corbyn said that the failure to "take back control" ("Vote Leave" slogan during the Brexit referendum) could make the United Kingdom "a vassal state of Trump's America".

Which shows how tough the Brexit road ahead for Johnson is. On the one hand, Ursula von der Leyen, the European Commission president-elect, has indicated the EU could extend the Brexit deadline but not reopen the negotiation on the Brexit deal. On the other hand, Johnson has vowed to not seek further extension of the deadline, and even reiterated the UK will leave the EU on Oct 31, with or without a deal.

More important, since the British Parliament is in recess and will open only on Sept 3, Johnson has less than two months to break the Brexit deadlock in Parliament or face a "no-deal" Brexit.

The majority of MPs have rejected a "no-deal" Brexit. Which is perhaps the only thing they seem to have agreed on. But Johnson insists Britain would leave the EU on Oct 31 even without a deal. These conflicting views could set Parliament and the new government on a clash course.

Even if Johnson somehow manages to deliver Brexit - on Oct 31 or later - he will still have the arduous task of navigating Britain through the post-Brexit turmoil. The pound sterling has already dropped by about 15 percent since the referendum on Brexit was announced. And investment in Britain has stagnated, with some reports even indicating the country already has one foot in recession.

Even with a soft Brexit, the UK's service industry will take a big hit, as the current agreed deal covers only commodity trade and not services. In particular, after leaving the EU, Britain's robust financial service industry will have to depend on the EU's "equivalence" arrangement, a patchwork of rules that gives different services different degrees of access to the EU states, which would be nowhere near the current unfettered access Britain has to the EU market.

Externally, although Trump has welcomed Johnson's prime ministership, the leaked memo of Kim Darroch, former British ambassador to the US, has soured US-UK relations.

And while the seizure of a British oil tanker by Iran in the Strait of Hormuz has created a new crisis, Britain's traditional partners - the United States and the 27 EU states - are at loggerheads over Iran, with the EU still trying to salvage the Iran nuclear deal despite the US threatening to impose more sanctions on Iran.

As for Sino-British relations, Johnson is a well-known figure in China, because as London mayor, he was in Beijing to receive the Olympic flag at the closing ceremony of the 2008 Olympic Games since London was to host the 2012 Olympics.

Johnson also welcomed Chinese developers to participate in several high-profile building projects in London. And in 2013, China and Britain forged a deal which made London the biggest offshore renminbi clearing center. Last year, the renminbi's trading volumes eclipsed those of the pound against the euro - a milestone in bilateral financial ties.

Observers on both sides expect Johnson to strengthen Sino-British trade relations, because as British foreign minister in the May Cabinet, he advocated free trade with China. In particular, since a large part of Johnson's leadership campaign focused on the possible post-Brexit deals with non-EU economies, it is possible that under his prime ministership, Britain will become the first European country to sign a free trade agreement with China.

The author is an assistant professor at Hunan University's School of Public Management and a visiting researcher at Tsinghua University's Belt and Road Research Institute. The views don't necessarily represent those of China Daily.