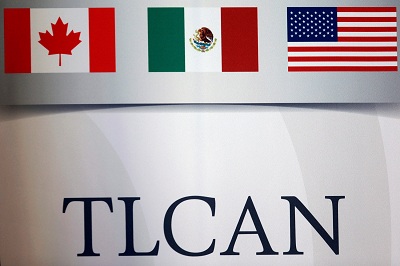 A NAFTA logo is seen during the fifth round of NAFTA talks involving the US, Mexico and Canada, in Mexico City, Mexico, on November 18. (Photo: VCG)

Officials from the US, Canada and Mexico are meeting for the fifth of seven planned rounds of talks to update the North American Free Trade Agreement (NAFTA) in Mexico City, with the meetings to conclude on November 21.

After four rounds of the NAFTA negotiations held before, little achievement has been made. Three countries could hardly reach agreement in several key issues, such as the rules of origin and dispute resolution.

Many demands of the US are considered unacceptable by Canada and Mexico, including the “sunset clause”, which asks to terminate NAFTA if three countries did not renew the treaty in five years.

Just before the fifth round, Mexico’s economy secretary Guajardo said Mexico may accept a five-year evaluation of NAFTA, but not a “sudden death” clause. His softened stance is considered as a positive signal for the talks.

However, while continuing the fifth talks, the Office of the US Trade Representative (USTR) issued a 17-page document for further NAFTA renegotiation.

As the Los Angeles Times reported, the USTR made some additions and changes to the blueprint it initially outlined in July, a month before the first-round talk for the renegotiation.

According to the Summary of the Objectives of the US, the North American country did not change the position on several the key issues.

In the document, statements like “Improve the US trade balance and reduce the trade deficit with the NAFTA countries”, “Update and strengthen the rules of origin to ensure that the benefits of NAFTA go to products genuinely made in the US and North America”, and “Eliminate the Chapter 19 dispute settlement mechanism” are prominent, which may become the obstacles in the trilateral talks as before.

In the past talks, the US was seeking to increase the NAFTA’s domestic auto content requirement from 62.5% to 85%, hoping to attract investment and create jobs in the region, especially in the US.

But Canada and Mexico thought that the new rules of origin are unworkable and would damage the highly integrated auto industry.

What’s more, the US Chamber of Commerce president noted that NAFTA and its spirit of cooperation have helped establish North America as one of the most vibrant and competitive regions in the world, saying the new proposal may remove the advantage.

US negotiators also wanted to eliminate the dispute settlement mechanism, Chapter 19, from NAFTA.

This chapter is considered as the “red line” for Canada, which allows for a third-party arbitration system to handle disputes when companies are accused of selling their products below fair value, or of receiving unfair subsidies.

Obviously, someone doesn’t like to resolve problems in this way and the other one just trust this approach.

Although each of the three countries threatened more than once to leave the table if they’re not satisfied with the result, analysts believe that NAFTA will be modified rather than terminated.

NAFTA has been carried out for nearly 24 years. According to the American Chamber of Commerce Mexico, three members of NAFTA exchange about $2.6 billion in products every day. NAFTA is not just a commercial treaty, but more like a regional integration agreement for the three countries.

The renegotiation may be tough like a long-term battle, everyone is trying to get more benefits for himself, but all of them are clear the collapse of NAFTA means what.