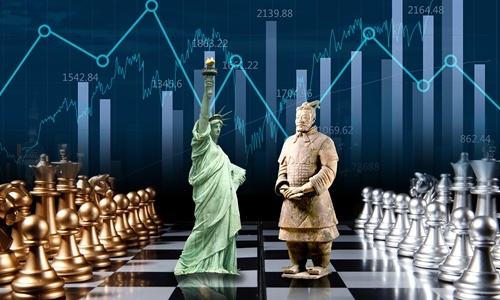 As the China-US relationship continues its downward spiral following a series of provocative maneuvers by Washington, a dim light of cautious hope emerged that reported trade discussions scheduled next month between senior officials from both sides could produce certain momentum for maintaining dialogue channels for what appears to be one of the most challenging and risky periods in China-US relations over the next three months.

Such hopes among some Chinese experts stem largely from the long-standing belief that the massive economic and trade cooperation between the world's two largest economies still play the role of a ballast stone that helps stabilize the most consequential bilateral relationship in the world. The fact that both sides still cling onto the phase one trade agreement despite widening confrontation also underscored the long-term importance of trade for both sides that outweighs election politics in the US and any ill-intended geopolitical gambit of any US administration, analysts noted.

Leaders of the Chinese and US trade negotiation teams are scheduled to hold talks next month to discuss the implementation of the phase one trade agreement that was signed in mid-January, the South China Morning Post reported on Friday, citing anonymous sources.

Though officials on both sides have not made such announcements, Chinese experts that closely follow the trade negotiations say that it is highly likely that talks will soon take place in line with terms under the phase one trade deal that both sides should hold discussions over the progress of the agreement.

"This is within the plan under the phase one economic and trade agreement and there is no information at the moment that suggests that won't happen," Gao Lingyun, an expert at the Chinese Academy of Social Sciences who follows the trade talks closely, told the Global Times on Sunday, adding that lower-level trade officials have maintained communication since the signing of the agreement and the specifics of the upcoming talks might still be in the works.

If the trade talks were to take place, they would mark a rare channel for dialogue between the two countries, as the war of words has escalated into tit-for-tat diplomatic actions, including the closures of each other's consulates. There have been no media reports of talks between senior diplomats and other top officials in recent weeks as bilateral ties rapidly freeze.

Though the dialogue is likely to focus on trade, it - if it takes place - will also offer a "window of opportunity" for both sides, particularly for the US, to adopt the "right attitude" toward cooperation rather than continuing with its confrontational approach, said Li Yong, deputy chairman of the Expert Committee of the China Association of International Trade.

"This is a test for the US to recognize the value of… equal and peaceful cooperation and stop stubbornly undermining the China-US relationship," Li told the Global Times on Sunday. "I hope the US won't treat [the talks] as a political game, but instead act with sincerity."

Cautious hope for the reported dialogue also underscores the importance of economic and trade cooperation between the two countries in ensuring that their bilateral relationship remains on largely cooperative and positive terms in spite of political and ideological differences, analysts said.

Despite their overtly aggressive tone, US officials are well aware of the massive economic benefits, Gao noted.

"My assessment is that the Americans' stance on China is to maximize the impact of public opinion but minimize the economic impact. So there is no need to worry that economic and trade ties are in trouble," he said, stressing that the two sides are still committed to carrying out the agreement, despite escalating diplomatic tensions.

On Thursday, even after ordering the closure of the Chinese Consulate General in Houston, US President Donald Trump said that China was "setting records" in purchases of US agricultural products such as corn and soybeans - a key term under the phase one trade agreement, though he added the deal "means less" to him, according to Fox Business.

Trump's remarks might have highlighted the delicate balance his administration is trying to strike amid a heated election season - keeping the phase one trade agreement which it bills as an election selling-point, while attacking China on a wide range of other issues from Hong Kong to Xinjiang and the South China Sea, analysts noted.

"Even from the standpoint of Trump's election campaign, picking up a political fight with China alone is certainly insufficient. It also needs the backing of an economic and trade deal with China. There is no other country that can replace China in an agreement of such a scale," Li said, noting that China-US trade cooperation still plays an important role as a stabilizer for the bilateral relationship.

Asked about Trump's comments, Wang Wenbin, a spokesperson for the Chinese Foreign Ministry, referred to questions over the phase one trade deal as the responsibility for other government departments in charge. But Chinese officials have repeatedly stressed that China will carry out the deal.

Chinese companies have continued to purchase US agriculture products, which experts believe remains a core issue in Trump's reelection campaign, despite the rising tensions. As recent as Thursday, the US Department of Agriculture said China purchased a total of 132,000 tons of US soybeans. In June, China bought 4.03 million tons of soybeans, Zhang Xiaoping, country director for China at the US Soybean Export Council, told the Global Times recently.

Experts said that given the significance of the phase one trade deal for the two countries, implementation and related discussions will likely continue beyond the US elections in November. However, negotiations for a phase two agreement are unlikely to start anytime soon.

"It's still hard to say whether [the reported dialogue] is a turning point or not… but China-US economic and trade cooperation is definitely the ballast stone [for bilateral relations]," Gao said.