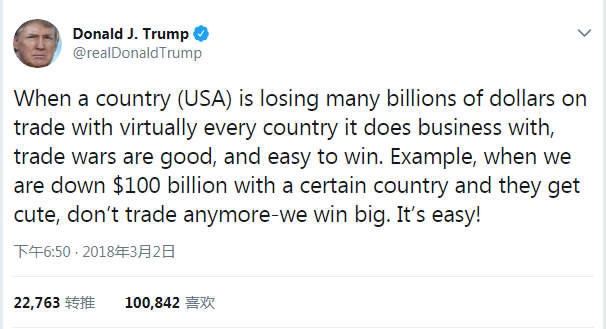 “Trade wars are good and easy to win,” US President Donald Trump tweeted on March 2, in the early hours of the day, 2:50 a.m.!

Was he too excited about winning the trade war, or had he spent the sleepless night figuring out how to win the war? Can a trade war end up with one winner and with all others being losers?

Common sense has given an answer: no one can win without losing, period.

e don’t need to go far back in history to learn the lesson of trade wars.

In 2002, the George W. Bush administration did a similar levy on tariffs of imported steel products in an attempt to protect the domestic steel industry from foreign competition. The then-President Bush did not expect any “unintended consequences” as he firmly believed that the tariff 8 percent to 30 percent would help the American steel industry. But, the outcomes turned out to be so unexpected that the steel industry did not fare better from the protective measures, while the downstream industries were seriously hurt by the tariffs, losing up to nearly 200,000 jobs, larger than the size of the total employment within the steel industry at that time.

There were also other negative impacts as a result of the tariffs-stock indices were down, US dollars plummeted and Treasury bond prices went high. However, the story ended without any humor, but with a legacy that policy makers should not step on people’s well-being by using protective tariffs, and it is a war that has no winner.

No one would want to see history repeat itself, particularly people that believe the trade wars he initiated are going to be different and an easy game to win. Well, the world hasn’t changed much to justify the slap of tariffs today for protectionist purposes.

Already, there are warnings from sober-minded pundits that the steel and aluminum tariffs by the Trump administration would hurt the American economy and jobs. Sadly, President Trump has never believed those pundits and insisted on doing what he thinks is the“right” thing to do.

With a purpose and a target in mind, this round of tariff levys is indeed different.

Trump allows the affected countries to negotiate “exemptions”, but with seemingly non-negotiable conditions. China has surfaced in the conditions of the exemption negotiation, not as a victim, but a target of assault!

There are at least two questions that need to be answered about the rationale of the whole design.

Question one: if everyone else is exempted from the tariff except China, would American steel and aluminum industries be freed from foreign competition? Question two: will all the allies negotiate the exemptions to accept non-negotiable terms? EU wants an exemption for the entire European Union, according to France’s finance minister, Bruno Le Maire, and bilateral negotiations with individual European countries would be completely unacceptable, he added.

With criticisms from around the world about the tariff plan, one thing President Trump seemed to have won bipartisan support is for the targeted of trade war on China. While the specter of investigations under Section 301 is haunting the China-US economic trade relations, President Trump has doubled down on the tariff package on Chinese imports from 30 billion US dollars to 60 billion US dollars, aiming at over 100 products. How is that going to play out, with the US winning big, running away unaffected? No. This answer has been given by research and analysis in the US.

The Chinese attitude towards trade wars is unmistakably clear. Premier Li Keqiang said, in the press conference on March 20, that “there will be no winner in a trade war should it happen between China and the United States.” The message was that China does not see itself a doomed winner of a likely trade war and hope the Trump administration would see it the same way.

There are already concerns that China would retaliate on the imposition of tariffs against Chinese products going to the US. Retaliation as a result of the US-initiated trade war. China does not want trade wars with anyone including the US and will not initiate one, as “it will bring disasters to China, the United States and the world,” said China’s Commerce Minister Zhong Shan.

Zhong echoed the same message from Premier Li Keqiang saying that "There are no winners in a trade war”, but added, “China can handle any challenges and will resolutely protect its interests,” a position that China has repeated on many occasions.

China is set to further open its doors by widening market access and lowering tariff thresholds for foreign products, providing winning opportunities for the world including American companies, most of whom do not want to lose out in “trade peace” and win in a trade war which could end up hurting everyone.