OPINIONS Trade tension will bite US harder in long run

Trade tension will bite US harder in long run

The trade friction instigated by the US was always inevitable. The move from cooperation to competition in China-US relations is not surprising, but it will cause damage for both sides. China may feel more negative effects in the short term, but in the long run, the trade tension will come back to bite the US harder, as long as China adopts the right countermeasures and prepares for the worst. 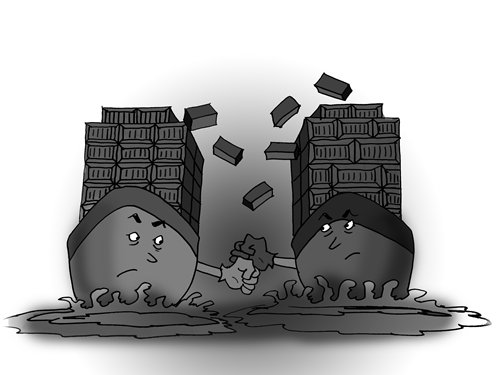 If the trade friction worsens, there are two potential situations that could come about. One is that China and the US impose 30-60 percent tariffs on each other. The other is a massive global trade war involving many countries.

However, the impact is unlikely to be as severe as that from the 2008 subprime mortgage crisis. From 2007 to 2009, the growth rate of Chinese GDP slowed by around 4 percent. But China has greatly reduced tariffs on many products, so imports will not fall as much as they did during the 2008 crisis. The manufacturing and real estate sectors are also unlikely to suffer as much as before, and infrastructure investment will continue to boost GDP growth.

The 2008 crisis dented the global financial system, but the trade tension will not. Additionally, China's trade partners and members of the Association of Southeast Asian Nations (ASEAN) such as South Korea, the Philippines, Thailand and Malaysia have higher capacity utilization rates than before.

The Chinese economy will face challenges. Amid tougher regulations and tighter supervision of the financial market and local government debt, enterprises will find it harder to gain financing than before and there could be credit risks. China's GDP growth may slow to 6 percent in the next six or 12 months.

Stimulation of consumption can no longer be relied upon. With a large aging population, growth in consumption could result in a lower savings rate. This would increase the cost of financing and curb investment. Therefore, the downward pressure on economic growth could be considerable. Consumption alone can hardly support the current growth of the Chinese economy.

Fixed-asset investment from January to May was stable. Investment in manufacturing and real estate was stronger than in the second half of 2017. But lower income and lower expectations for enterprises' profitability amid the trade tension could curb investment, especially for the manufacturing industry.

It is possible that exports and imports could see a sharp fall in the third quarter. Before the tariffs on both sides took effect on July 6, exporters in China came up with a method to avoid paying extra tariffs by making deliveries in advance, so the export data for the second quarter was still decent.

The trade situation will also affect China's consumer price inflation (CPI) through imported commodities with higher prices. CPI at the end of 2018 could potentially reach 3 percent.

Against this backdrop, China will have to prepare countermeasures.

The nation's fiscal policies will have to be more proactive. The one-year-aggregated overall government deficit to GDP ratio reached a record high by the end of May. Taxes such as value-added tax and individual income tax need to be further reduced. At the same time, China will need to keep to the opening-up trend, as well as continuing to lower restrictions on financial services, manufacturing and other retail industries.

Monetary policies need to focus on supporting the real economy and stabilizing deleveraging. The policies must provide sufficient funds for quasi-fiscal activities and livelihood projects. The risk of debt defaults also needs to be tamed.

The short-term depreciation of the yuan will not last. The fundamentals of the Chinese economy are sound and the pressure for capital outflows has fallen since 2015. Certain controls can also be put in place if the deprecation pressure gets stronger.

The China-US trade conflict will not be a short-term situation. But China's potential can ease the pressure from shrinking external demand. The internal demand revival will promote higher national consumption and domestic investment, leading to sustained growth for the Chinese economy.

The rise of China is an unstoppable historical trend. China will need to go with the trend and keep on opening up, innovating and promoting peaceful development.

The article was compiled based on a report by Qiu Xiaohua, chief strategy officer with the Sunshine Insurance Group and chief economist with Guangdong Huaxing Bank. The report was first published by Urban Innovation Think-tank, a Shanghai-based think tank.