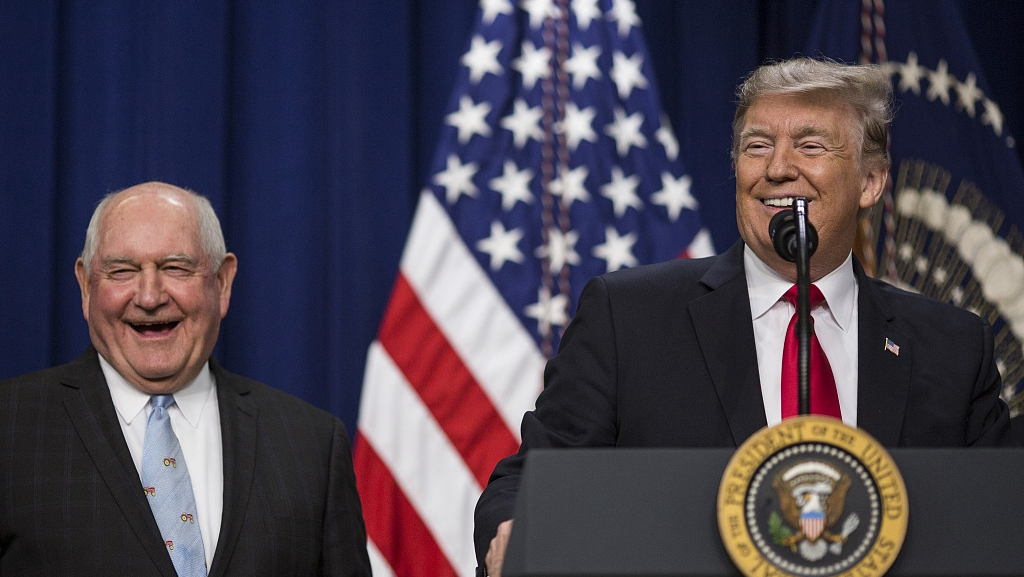 As an ancient Chinese saying goes, "The tree desires peace but the wind keeps blowing."

On May 10, the Chinese delegation visiting Washington brought sincerity for reaching a trade deal, along with a constructive attitude to resolving trade friction between China and the US What is disappointing, yet somewhat customary, is that US President Donald Trump seemed to have entered yet another psychotic episode, and decided to up the ante on protectionist measures. He made it clear by imposing a 25-percent tariff on the remaining 320 billion US dollars' worth of Chinese goods.

Meanwhile, unverified sources suggested that American officials wish to reach a deal in 20-30 days, asking China to accept full terms as demanded. They desire to force China into making a deal through "maximum pressure," and achieve a complete win.

As a result, the generous Chinese people were caught by surprise, embracing the pressing dark cloud. The surprising turn of events ignited all kinds of emotions and rhetoric in China. Trump must feel somewhat proud like a child, pleased by what he considers a public display of courage and fearlessness. In this state of mind, he's sure to make his brave actions known in a series of tweets:

1 Talks with China continue in a very congenial manner - there is absolutely no need to rush - as Tariffs are NOW being paid to the United States by China of 25 percent on 250 Billion Dollars worth of goods & products. These massive payments go directly to the Treasury of the US.

2 The process has begun to place additional Tariffs at 25 percent on the remaining 325 Billion Dollars. The US only sells China approximately 100 Billion Dollars of goods & products, a very big imbalance.

3 With the over 100 Billion Dollars in Tariffs that we take in, we will buy agricultural products from our Great Farmers, in larger amounts than China ever did, and ship it to poor & starving countries in the form of humanitarian assistance. In the meantime we will continue to negotiate with China in the hopes that they do not again try to redo deal!

4 We have lost 500 Billion Dollars a year, for many years, on Crazy Trade with China. NO MORE!

5 Tariffs will bring in FAR MORE wealth to our Country than even a phenomenal deal of the traditional kind. Also, much easier & quicker to do. Our Farmers will do better, faster, and starving nations can now be helped. Waivers on some products will be granted, or go to new source!

6 Build your products in the United States and there are NO TARIFFS!

7 Your all time favorite President got tired of waiting for China to help out and start buying from our FARMERS, the greatest anywhere in the World!

This kamikaze-esque mentality of President Trump serves no specific purpose other than shooting himself, along with the American public, in the foot.

His thinking mistakes the 21st century for the 19th century. The mentality that imposing tariffs on Chinese products directly results in absolute gains for the US at the expense of China is derived from mercantilist logic typical of the 19th century.

Trump paints such a scenario: Chinese products imported to the US are almost wholly produced by Chinese companies, and completely irrelevant to American companies and investors; the tariffs collected will be paid fully by Chinese producers and exporters, not American consumers; China's exports to the US are almost all finished products; even if American companies import semi-finished products, those companies are large enough to withstand a hit and adjust global supply chains.

Trump is treating the Chinese market as replaceable. He understands the political scene well enough to not take any drastic actions that will affect red-oriented American farmers. He naively thinks he could copy Dwight D. Eisenhower's "food for peace" – taking money collected through tariffs to buy American agricultural products previously sold to China and then provide them to countries stricken by starvation and poverty as humanitarian assistance.

According to USAID's annual report in 2017, the “food for peace” program that year was intended to buy 1.4 million metric tons of agricultural products from American farmers. Statistics from the Office of Economic and Commercial Affairs of the Chinese embassy in the US showed that in 2012, China imported 25.97 million tons of soybeans and 1.48 million tons of cotton from the US. But according to the Ministry of Commerce, in 2017, China imported 32.86 million tons of soybeans. It's obvious that when Trump is thinking about alternative solutions, he shows no talent in doing business. At that moment, he seems to be controlled by a kind of self-confidence typical of Peter Navarro.

He completely ignores the research findings of American institutes and think tanks.

Since he assumed the presidency, Trump has always claimed that he is a successful businessman and boasts of mastering “the art of the deal.” He tries to paint himself as a commander-in-chief capable of governing the economy and keen on protecting public welfare, drawing a distance from the so-called elitist Washington establishment.

But when it comes to research on the trade war, research institutes and think tanks in Washington are in no way acting elitist. In a report published in February 2019, Trade Partnership Worldwide – an international trade and consulting firm based in Washington, DC – revealed the significant loss the US has to endure owing to the increase in tariffs.

It finds that increasing tariffs on 250 billion US dollars' worth of Chinese products from 10 percent to 25 percent would result in a job loss for 934,700 people. The average American family of four will have to find an extra 767 dollars to pay for higher costs for goods and services resulting from the tariffs.

If the US imposes a 25-percent tariff on all Chinese imports, including an additional 325 billion dollars' worth of goods that are not taxed now, as Trump has threatened, it will result in a job loss for 2,159,500 people. The average family of four will pay nearly 2,300 more dollars for higher costs for goods and services.

Research shows that American importers and retailers can bear an increase in tariffs of around 10 percent, without raising prices on products. But any more than a 10-percent tariff increase will lead to higher prices from suppliers and its effect will be passed along to customers, whether it is individual consumers or manufacturing companies.

It would not take long before the impact of the tariff hike is felt. Jonathan Gold, vice president for supply chain and customs policy for the National Retail Federation, said that if tariffs are kept at 25 percent, within weeks or months, an increase in prices or other negative consequences will soon be apparent.

A lack of knowledge, distorted decision-making process and individual idiosyncrasies – all these factors have led to Trump's self-defeating aggressive approach in trade negotiation. He wanted China to make major concessions, and sought to put pressure on China psychologically. But those are short-term returns with negative long-term consequences.

Faced with pressure from the US, China of course feels the tension. But as we analyze the problematic nature of the US' approach to negotiating, we need to be clear-eyed about the situation that China is in. The priority right now is to have a quick win at the current stage of the US-China strategic bargaining.

After this round of US tariff hikes, some companies have relocated from the Chinese mainland to other regions. Certain media reports refer to this as the "industrial chain extrusion" under the pressure of the trade war. But the transfer started well before the trade frictions emerged. The recent escalation has only accelerated the process of the low-end manufacturing transfer and industrial restructuring.

There are instances, however, of companies setting up production lines in China. For example, Ford Motor Co plans to begin production of new luxury Lincoln models in China for the Chinese market, starting with the new Corsair later this year, to benefit from lower costs and avoid the risk of tariffs, Ford's Chief Financial Officer Bob Shanks said on Monday.

The US has repeatedly mentioned its wish for China to achieve prosperity, openness and stability. However, the wish is based on the premise that the US will continue to prosper from China, and that China will not emerge as a threat to the benefits that the US enjoys.

China is committed to continuing its own development, which will inevitably lead to the redistribution of interests across the globe. What the US aims to achieve is maintaining its superior position, and continue to benefit more when dealing with other countries. At the same time, it tries to eliminate possible threats to US hegemony by not allowing other countries to achieve free flows in the industrial chain.

Under such circumstances, China should respond to the US' irresponsible escalation of the trade friction by communicating, maintaining its strategic strength and adhering to its own development path.