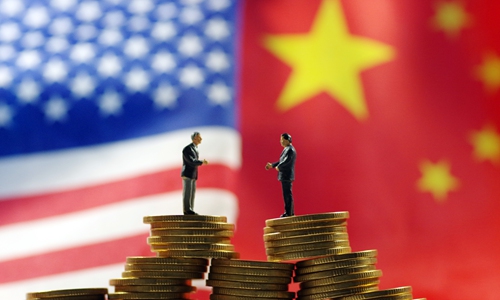 The most prominent part in the tumultuous Sino-US relationship over the past two years has been a trade war. This trade war was started by the US, but its duration and intensity were out of expectation of both sides. The two countries reached agreement on text of phase one trade deal and will sign it soon.

The trade war is a serious challenge on China's path to development, and we believe most Chinese today will give the country high marks for its performance. A relatively common feeling is that China has withstood the impact of the US' strong trade war. China has maintained sound economic fundamentals. China's development continues to show good momentum, with positive public sentiment and social order.

First, China has a huge economy and a solid material foundation. Although the US has comprehensive advantages in economy and technology, China has formed many first-class elements in some sectors. For example, we are the largest industrial producer, with a well-developed manufacturing capability and the largest trader of goods. China has a consumer market on a par with that of the US. China already has the world's largest markets for autos, mobile phones and major agricultural products, and the country has huge potential. Facts have proved that the Chinese economy has a strong ability to resolve the crisis and has more room for maneuver than we once thought.

Second, China's institutional advantage is not a slogan. It does have the extraordinary advantage of mobilizing society and rallying people at critical moments. At the beginning of the trade war, some ideological chaos appeared in Chinese society. But pessimistic voices have been gradually marginalized, and the political advantages of our society have been increasingly unleashed. The trade war did not shatter China, and we have become more united than ever before under the leadership of the Party.

Third, in face of the trade war, China has been calm and rational, firmly resisting pressure and actively turning some pressure into motivation.

After these two years of experience, Chinese people first became not so afraid of conflicts. Reform and opening up had gone smoothly, and people thought that China's overall modernization would come naturally because of its inertia. Now the Chinese know that China's rise will not be so smooth, but even America's containment will not be so terrible. If there is any problem, just deal with it seriously.

Moreover, the Chinese really understand what a big country is. A great power needs to bear some super pressure that cannot be avoided. Chinese society is prepared for more storms in the future.

Collective confidence is one of the most precious spiritual resources of any country and society, and such self-confidence can only be accumulated by overcoming difficulties one after another. If China's foreign trade collapsed because of the trade war, the Chinese yuan exchange rate against the US dollar depreciated to more than 10, and the economic growth rate became negative, we would not have had the collective confidence we have today.

We further learned through the trade war that the US is still very strong. We have suffered losses, we have grown. This is how we deal with strong players, we either break down, or we become stronger.

Looking ahead, the China-US trade war is not over, and the future negotiations will get harder and harder. But the Chinese have become calmer. We can't predict what's going to happen, but we're more confident that none of them can defeat the country.