In response to US tariffs on steel and aluminum, the European Union (EU) adopted retaliatory measures which target a list of US products worth 2.8 billion euro ($3.2 billion) and came into effect on June 22. US President Donald Trump immediately threatened to slap 20 percent tariffs on European cars if the bloc did not give up the trade barriers placed on the US. It shows that the US-EU trade conflict has been trapped in a vicious circle of retaliation, and there may be new negative factors influencing transatlantic relations. 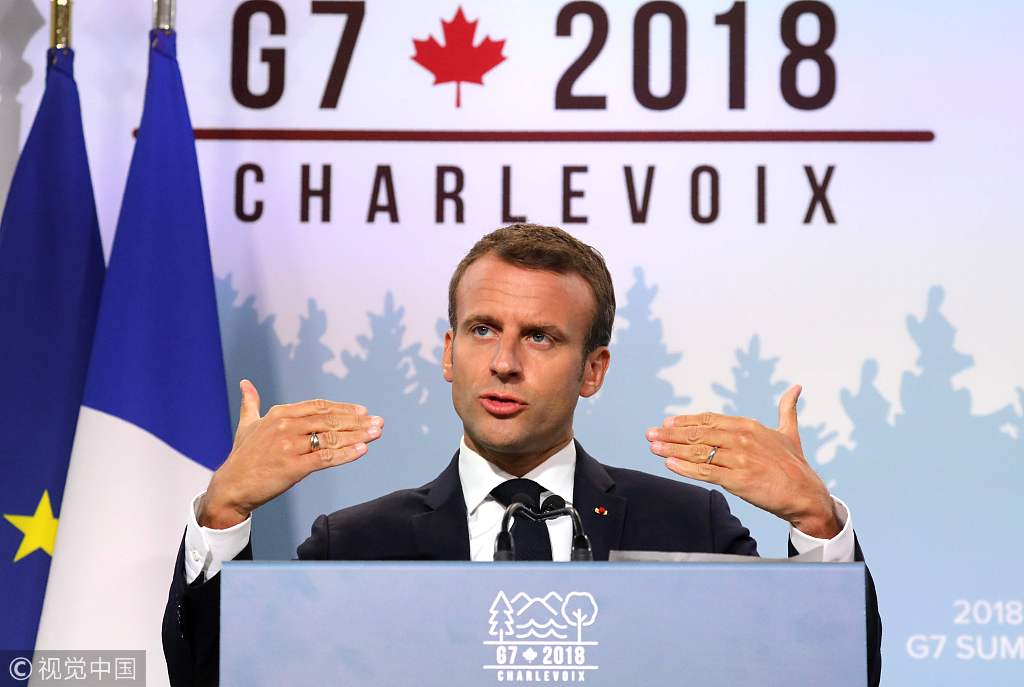 French President Emmanuel Macron addresses a press conference at the conclusion of the G7 Summit on June 9, 2018 in La Malbaie, Canada. The leaders of the G7 failed to heal a tariff dispute that has pushed them to the brink of trade war, as Donald Trump quit their summit early and warned Canada, Japan and Europe that "the gig is up." (Photo: VCG)

Since the US hit the EU with steel and aluminum tariffs, the EU has been passively rebalancing the difficulties it faces. US-EU relations have been jolted as the Trump administration began to regard the bloc as a competitor instead of a community of shared interests. The US has regarded the EU's security and economic interests as a bargaining chip which can be freely sacrificed.

For example, the US treats the steel and aluminum imports as a threat to its national security, and has withdrawn from the multilateral engagements which it jointly led with the EU. Washington has a bias toward Saudi Arabia and Israel on hot issues in the Middle East, such as the Iran nuclear issue and the Israeli-Palestinian peace process.

The EU's dignity and confidence were seriously harmed, and both sides are almost at loggerheads. Donald Tusk, President of the European Council, criticized Trump: "With friends like that, who needs enemies?"

The Group of Seven (G7) summit was supposed to coordinate policies among Western nations and yet the rift deepened between Washington and its EU allies because of Trump's caprice. French President Emmanuel Macron described the group as "G6 plus one." German Chancellor Angela Merkel has appealed for solidarity in the EU, saying that the Europeans have to "take our destiny into our own hands." It shows that European countries have lost much trust and sense of security toward the US, and the "America First" policy has forced Europe to depend on itself.

Under the principle of "America First," Trump believes that the US has suffered losses in US-EU relations, and he needs rebalancing to be satisfied again. It has put European countries in an awkward position.

On the one hand, the EU's economic and security dependence on the US is still high and as a result, the EU not only has to influence the US to return to traditional ties, but also control the current divergences between the two sides. On the other hand, the EU is also aware that it would be meaningless to unconditionally make concessions to the US as it neither benefits ties nor prevents Trump from pressuring Europe.

After the G7 summit, Merkel said that "we will not allow ourselves to be deceived again and again." Thus, the EU has adopted retaliatory measures. It hopes the US would give up the trade war after realizing the harm it is doing and that the two sides would reach a compromise on the steel and aluminum issue. The EU also lodged a formal complaint with the World Trade Organization (WTO) over US import tariffs on steel and aluminum.

However, the EU's plan may end in failure because Trump believes that the US won't lose in a trade war and treats the multilateral trading system with contempt.

As the US and the EU both take retaliatory measures, the escalation of the trade dispute is inevitable. The Economist described it as "the looming global trade war." As both sides are bringing huge domestic pressure on trade issues, they don't have much room for maneuver. What the current tariffs will bring to both sides and the global economy is still unknown.

Even if the EU can dilute the effects of tariff on itself through negotiations, it will have to make major concessions in market access. It's unlikely that US-EU relations will warm up since Trump's interactions with Europe have damaged mutual trust.

Besides the EU, China, Japan, Canada and Mexico are also facing the threat of protectionism, and are seeking retaliatory steps against the US. Since most countries approve of the multilateral trading system, why doesn't the EU work together with them to say no to the US' protectionism?

The author is an assistant research fellow with the Institute of European Studies, China Institutes of Contemporary International Relations.