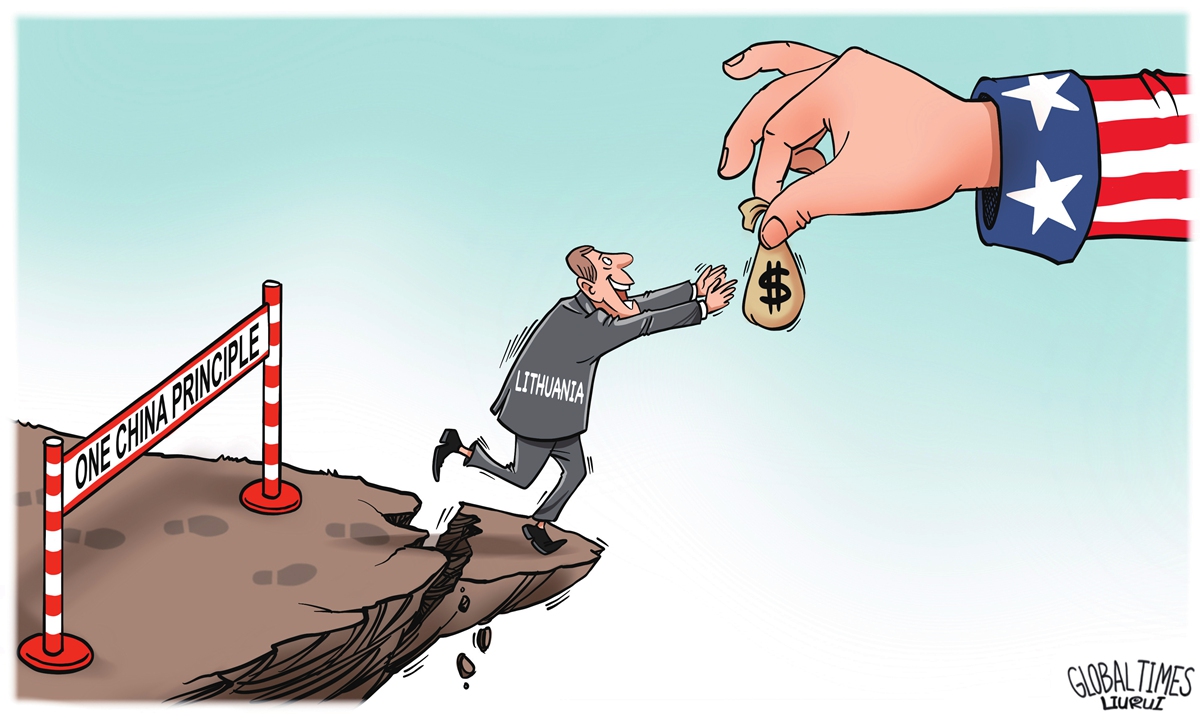 Gambling on crumbs from the US' table (Illustration: Liu Rui/GT)

A recent poll conducted on behalf of the Lithuanian foreign ministry showed that nearly two-thirds of the Lithuanians don't support their government's current China policy. Only 13 percent of respondents rated the policy "very positively" or "positively." This shows that more and more Lithuanians are waking up and realizing how big a mistake Vilnius made several months ago when Lithuania opened a representative office under the name of "Taiwan."

The truth has always been telling. First, Lithuania shouldn't have provoked China's core interests. Second, Lithuania will pay a huge price for having done so. Third, anyone who acts as a tool of the US to contain China will lose more than it may gain, and eventually become pathetic cannon fodder. As long as the Lithuanian government doesn't change its course, these three points will become more and more apparent, constantly hurting the country.

The Lithuanian government is still talking hard, but the pressure it faces is growing day by day. The Democratic Progressive Party (DPP) authority on the island of Taiwan and Washington are worried that Vilnius cannot make it, so they intensified their carrot-and-stick tricks. Washington has always been playing with Lithuania to make the small country do what is too shameful for the US to do. Will Lithuania, with less than 3 million people, have a good ending as it is hung over the fire like this? This is a "dangerous game" which Lithuania cannot afford to play.

Earlier in January, Lithuanian President Gitanas Nauseda said the move to open a representative office under the name "Taiwan" was a "mistake." People can see the US has dug a pit for Lithuania and told the tiny country there are treasures to be found at the bottom of the pit. Some Lithuanian politicians who dream of becoming rich overnight have found nothing but several pieces of hard rocks. Those who dream of making Lithuania the most competitive regional country are now a little confused. But ordinary Lithuanians can see what has happened.

The real situation is that Lithuania's diplomacy has been kidnapped by a small group of foxy politicians and brought into a deep hole. It is without any doubts that a country's diplomatic policies should serve its people. But those Lithuanian politicians have used diplomacy as an oath of outlaws to cater to the US, gradually taking the opposite side of Lithuanians' interests. It is predictable to see more and more opposition and doubts from within Lithuania. Will they be willing to let their own government become a pawn of another country?

In the eyes of the DPP authority, Lithuania is a "gift" sent to it after it had consecutively lost its "diplomatic partners." The DPP sees Lithuania as a tool to help it break and widen a crack in the international community. In Washington's eyes, Lithuania is an experimental and potentially demonstrative tool in its strategic game with China. Both Washington and the island of Taiwan support Vilnius, but the amount of dollars they can provide is very limited and far from healing Lithuania's losses.

The DPP authority vowed to provide a $200 million investment fund to support Lithuania's enterprises, and then announced another $1 billion credit fund on Tuesday. The DPP authority is not Doraemon, and it has to use the Taiwan residents' money to buy US ractopamine pork, Australian wine, and Japan's nuclear-contaminated food. Sooner or later, it will not be able to sustain the growing expenditure on those purchases under political aims.

It is known to all that Washington uses Lithuania as a tool. It uses repeated diplomatic oral support to force Lithuania to stay in the firing line of major power games. In recent years, the US has been smearing China for "coercive diplomacy," and Lithuania is used by the US as the latest "evidence." But what has brought Lithuania to where it is now is exactly US coercion.

It has always been Washington's wishful thinking to get something for nothing. Washington colluded with the DPP authority to draw a blueprint, wooing Lithuania to provoke China's bottom line and act in line with US sanctions on Belarus. As a result, Lithuanian companies have to pay for violating the contract. Lithuania's justice ministry recently confirmed that the country paid 100,000 euros ($115,000) to a victim of arbitrary detention at a secret CIA prison near Vilnius.

As they have seen that Lithuania may step back, Washington and the DPP authority will presumably pour more gas on the fire and further upgrade their carrot-and-stick tricks. But while they may be able to manipulate a few quick-buck politicians, they are not fooling the Lithuanian people who really want a better life.