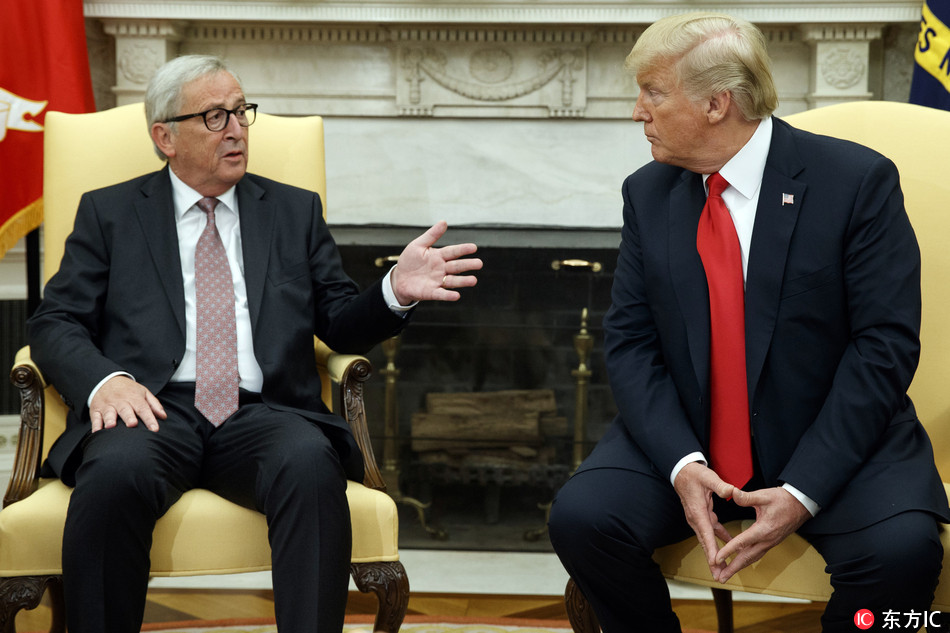 The relationship between the United States and Europe changed once again when Donald Trump took the presidency in 2017. His contempt for Europe has been on full display, especially during his recent visit to the continent. As a result, the cracks in the relationship across the Atlantic have grown to the point where the fundamental nature of the relationship has been called into question. Even though the United States and the European Union recently signed a trade cooperation statement, it is difficult to see the two sides putting the brakes on the downward spiral in their relationship.

At the end of the 1950s, six Western European countries launched the contemporary European integration movement. Their intention was to open up an independent economic sphere to help them manage the rivalry between the world's two superpowers, the United States and the Soviet Union. But the Europeans relied on the security guarantees of the United States, which made them the junior partner in the Western alliance.

In its early days, the European Economic Community had neither the interest nor ability to play a unique role in international affairs. And it made no attempt at defense cooperation. The United States' position as a leader in the Western alliance was unchallenged, and its European allies stood beside it during major crises such as the Berlin blockade, the Cuban missile crisis, and the conflicts over medium-range ballistic missiles.

But that didn't mean the United States exercised complete control over the actions of the major European powers. Under the leadership of General Charles de Gaulle, France withdrew from NATO's integrated military structure and developed its own nuclear weapons. And Germany, under the leadership of Chancellor Willy Brandt, independently carried out the New Eastern Policy known as Ostpolitik.

After the end of the Cold War, European integration was upgraded from the European Economic Community to the European Union. Its global political, economic, and international influence has advanced by leaps and bounds, and it is now on an equal footing with the United States. This evolution has been demonstrated in several ways.

First, the European Union publicly announced that "in a globalized, yet also highly fragmented world, Europe must shoulder its responsibilities in the governance of globalization" and worked to become the "core and role model" for global governance. On many international issues, Europe adheres to the concept of multilateralism, and has dared to say no to the United States. For the most part, it has been critical of the wars launched by the United States since the end of the Cold War, and refused to be a part of an American-led "international gendarmerie." This was clearly demonstrated in 2003, when France and Germany took the lead in opposing the United States' aggression against Iraq.

Second, Europe has pushed NATO to adapt to the contemporary international environment. In confronting Russia, Europe has to control the security situation in Europe. To this end, it resisted the accession of Ukraine and Georgia into NATO, formulated an independent security strategy for the European Union, and took steps towards collective defense. At the same time, the United States is pushing Europe to increase its share of NATO military spending and to obey NATO's command structure, while it tries to restrict the growth of European joint defense initiatives.

And third, there have been difficulties when it comes to concluding the negotiations for an American-European free trade zone. The talks have stalled, as Europe criticizes laissez-faire American finance, blaming the Americans for exporting its economic crisis to Europe. And the United States is jealous of and worried about the growth of European economic power. When Europe suffered a debt crisis, credit rating agencies in the United States were quick to lower the credit rating of European financial institutions. And they opposed the International Monetary Fund's financial assistance to the Euro zone, and pushed a response to the crisis that encouraged the failure of the Euro zone, and potentially even of the European Union itself.

Since President Trump came into office, however, the U.S.-Europe relationship has been pushed to breaking point. President Trump sees the cross-Atlantic relationship from the narrow perspective of the interests of the United States. And he has abandoned the established balance between rivalry and accommodation in the relationship. This is reflected in President Trump's contempt of European integration, and his public encouragement for countries to withdraw from the European Union. And he has made it clear that he sees America's security umbrella over Europe as a cost without benefit. This is why the Trump administration is pushing its European allies to increase their share of NATO military spending, as it complains about what it sees as an unjust economic relationship between Europe and the United States.

Having watched President Trump abandon the norms of diplomacy, and with them America's credibility as a negotiating partner, it has been with a sense of anger and deep disappointment that Europe's leaders have concluded that the United States cannot be trusted. At the same time, the European public has turned against the United States, bitter at being treated as if they were a partner in a failed business who hadn't paid their debts.

The current state of the relationship helps explain why the joint statement on economic and trade cooperation signed by European Commission President Jean-Claude Juncker and President Trump contained good wishes rather than concrete steps towards repairing the relationship.

The United States and Europe have long had their differences. But the cracks that have emerged in the relationship under the Trump administration look to be so wide and deep, they appear to be irreparable while President Trump is in the White House.