Trump clearly out of his depth in trade talks with EU 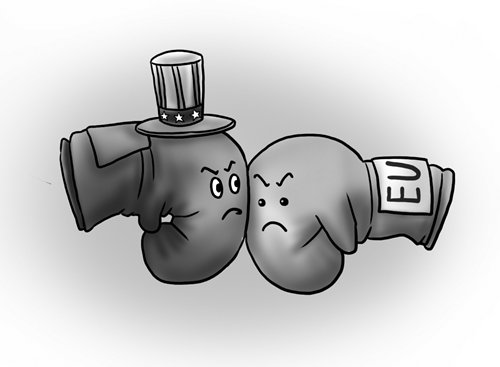 On July 25, when US President Donald Trump appeared in front of the White House with Jean-Claude Juncker, the president of the European Commission, their joint statement and spoken remarks surprised many. The two sides agreed "to work together toward zero tariffs, zero non-tariff barriers, and zero subsidies on non-auto industrial goods." It seemed like a remarkable U-turn for Trump, who, until recently, was threatening the European Union with higher tariffs - and extolling the value of trade tariffs (which are essentially taxes on imported goods) more generally. He even called the EU a "foe" as recently as June.

Substantive follow-through on the joint US-EU statement would represent a major policy shift for the Trump administration. But this is no triumph for Trump; rather, he seems to have been outmaneuvered by adroit European diplomats.

It is always hard to know when Trump has actually changed a policy - or when he may change it again. Still, it is worth noting that what Trump and Juncker announced was essentially a pledge to work toward exactly the kind of trade agreement that the Obama administration was negotiating with the Europeans from 2013 through the end of 2016. Work on that earlier version, known as the Transatlantic Trade and Investment Partnership (TTIP), was suspended following Trump's inauguration.

Restarting the TTIP negotiation is a big win for Juncker, in line with long-standing European objectives. It would also make it much harder for Trump to impose tariffs on European car imports - and German car companies' stock prices rose sharply on the news. It is also remarkable that Juncker managed to get Trump to emphasize working with the WTO to resolve issues regarding intellectual property rights. Cecilia Malmström, the EU trade commissioner, has been stressing exactly this approach.

What did Trump get from the Europeans, other than a return to a trade negotiation straight out of the Obama era? Trump claimed, at the press conference and subsequently, that he won a pledge from Juncker to buy more natural gas and "a lot of soybeans." Some media coverage even suggested that the Europeans had made concessions. But that interpretation does not fit the facts.

Regarding potential US exports of liquefied natural gas (LNG) to Europe, the Europeans have long been keen to increase this trade. The hold-up is US restrictions on energy exports. If there is any concession promised by the joint statement, it is from the Trump administration on this issue. This was made explicit in the fact sheet that the White House subsequently issued: "the United States will make it easier for the EU to purchase LNG."

At the same time, Juncker does not buy soybeans - the European Commission has no such budget, and any such imports would ultimately be a private-sector decision.

But there was no European concession at the White House on this issue - just a clever restatement of market realities. Furthermore, Europeans' purchases of soybeans are less than a quarter of China's.

The soybean pledge has some superficial political appeal, as growers have found themselves caught in the crossfire of Trump's trade conflict with China. The cost is real, and the Trump administration recently promised up to $12 billion to help affected farmers.

However, this entire potential cost is due to the Trump administration's disruptive policies and represents a scandalous waste of taxpayer money - an amount equal to about one-third of the entire annual budget of the US National Institutes of Health. How many lives could be saved through the judicious use of that $12 billion for, say, public health programs? Meanwhile, the federal government's budget deficit continues to increase - creating pressures for destructive future austerity.

Trump holds himself out as a brilliant negotiator, and his supporters regard his trade policy as a perfect example of his success. But in his recent talks with the Europeans, Trump was clearly out of his depth.