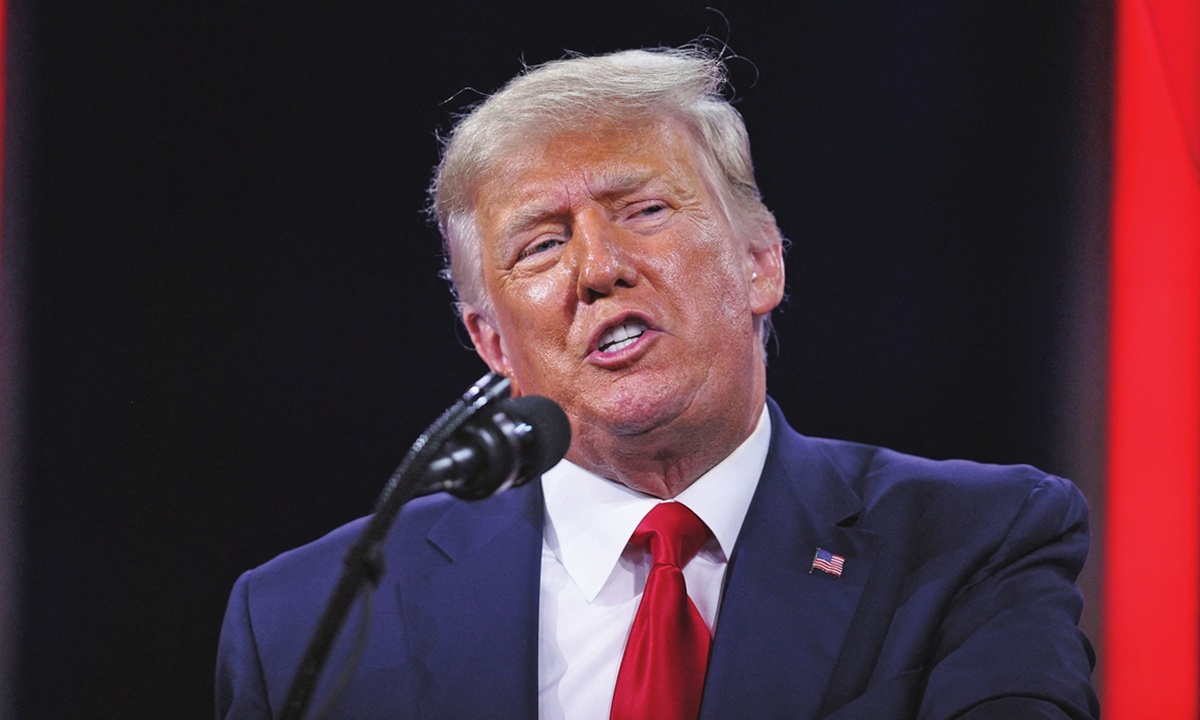 Former US president Donald Trump is trying hard to return and seek spotlight on the political stage again.

Also, at the North Carolina Republican Party State Convention held on Saturday night, Trump showed up and made some loud noise. His speech mainly focused on attacking two targets - the Joe Biden administration and China. "It's a disgrace what's happening to our country. The survival of America depends upon our ability to elect Republicans at every level," he claimed. When he touched upon COVID-19, Trump noted, without surprise, "We had this horrible thing come in from China… They must pay."

Some observers say that Trump is hinting at a comeback in the 2024 presidential election. Some netizens say he may even try to stage a coup by saying "take back the White House… sooner than you think." However, his appearance in the political arena lately shows the frustration he has to keep up his previous influence.

Trump has been trying to maintain his strong presence in US public opinion field after failing to get reelected. But this is obviously not easy. A recent popular Chinese phrase, "social death," referring to the alienation of certain people from society to the point of being excluded or ignored in society, can to some extent be applied to what happened to Trump.

His accounts have been banned from major US social media platforms. He even launched a blog to share his statements afterward, yet in less than a month, the webpage was also "permanently shuttered" and "will not be returning," CNBC reported on June 2. In his case, it could be argued that he is undergoing "social media death."

Trump has realized that he can hardly sustain his popularity and weight all by himself. So he is binding himself to the Republican Party to seek the possible return to power. That's why he endorsed out loud that the GOP will retake the Congress and the White House.

Trump also harshly attacked China during his Saturday speech. One of the reasons is that he believes he lost the reelection because of the coronavirus. China's efficient handling of COVID-19 serves as a foil to his failure, incompetence and problems in governance. So he has been venting his anger at China.

Moreover, anti-China slogans have become a powerful banner in the US. Thanks to Washington's previous policies, Americans' attitude toward China is getting more and more negative. More US politicians are unanimous in utilizing these negative China sentiments to gain more political interests, instead of addressing problems of everyday Americans. There's little consensus in the Congress these days, unless it's about countering China. So as long as Trump raises his anti-China voice, even Democrats won't say no to him. Hence, ripping into China is a convenient tactic for politicians to attract both attention and support.

"Many said they were excited to hear Trump's message" after his Saturday speech, CBS reported on Saturday. Many people find it hard to digest why Trump, who had made severe mistakes in coping with coronavirus, which led to enormous scale of infections and death toll, still has so many supporters in the US. This can be explained by emerging American anti-intellectualism and polarized political infighting.

Yet behind these trends is rising populism in the country. In US electoral politics, populism illustrates that ordinary Americans are so tired of trusting US elites. They now tend to challenge elites and the establishment to promote their own will. Voting for Trump, a political outsider, was a vivid demonstration in this regard.

Populism is caused by the accumulation of long-term social problems. However, American politicians do not intend to genuinely resolve these issues, as they are busy reaping benefits for their own political interests by exploiting the long-term social problems. As a result, the domestic problems of the US are deteriorating, US society becoming more divided, and populism turning into a more pressing challenge. A vicious circle is therefore being created and those who hype up populism will always get support.

A few words of Trump won't stir US politics today and Trump won't really take White House "sooner than you think." Yet his rhetoric has time and again exposed Washington's biggest challenge - US chronic, complicated, systematic puzzles at home, rather than any foreign affairs. Whoever is or will be the master of the White House is supposed to face the reality squarely. Unfortunately, American politicians are not showing willingness to fix the US' own problems fundamentally - all thanks to their shortsighted, personal political interests.

The article was compiled by a Global Times reporter based on an interview with Su Xiaohui, deputy director of the Department for International and Strategic Studies, China Institute of International Studies.