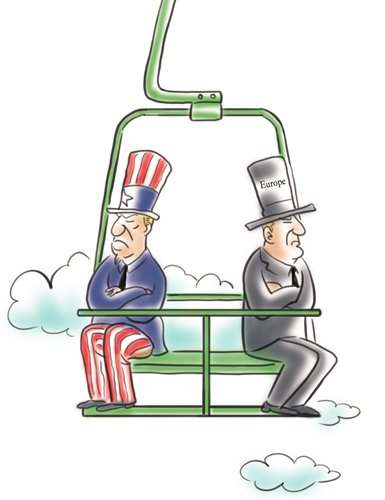 Three recent moves of US President Donald Trump's administration have astounded traditional European allies. After the US announced levying steep tariffs on steel and aluminum products from the EU, it also decided to withdraw from the Iran nuclear deal and moved the US embassy in Israel to Jerusalem, disregarding resistance from European leaders.

A series of diplomatic decisions by the US made Europe feel neglected by its ally. The rift between the US and Europe seems more and more obvious. The bloc and leaders from major EU countries now more often talk about an unreliable US in public. What happened to the traditional US-Europe alliance?
The US under Trump's rule now and the traditional US are two completely different countries. In the past few decades the traditional political elites have governed the US with their ideologies and Western values. Now under Trump, the US becomes atypical. It underscores "America First" and a principled realism. The principle here is still America first. And the realism constitutes a power game and exchange of interests.
Europe's understanding of the "atypical US" is insufficient in three aspects. First, it didn't expect Trump would take so lightly the ideologies and values shared by the West. It also has a poor understanding of Trump's personality. Unlike other US presidents, he is ready to put into practice almost all the campaign promises he has made, regardless of objections.
Moreover, it is not fully aware of the current political changes in the US. Social polarization has become quite serious in the country. The grass roots now show hostility toward both elites and immigrants. In the US, Trump represents the grass roots' inclinations. Facing mid-term election, Trump would only enhance his own ruling style and consolidate power.
In American history after WWII, the president who has had most similarities with Trump is probably Ronald Reagan. Although both are realists, there are obvious differences. Reagan's realism was to achieve and maintain the US' No 1 position in the world through power struggle with the Soviet Union. His logic was in line with traditional American political elites. However, in Trump's realism, rewarding the American people and saving the country's strength come first, while maintaining the US' global hegemony comes second.
It is right because the Trump-led US has changed from the traditional US; relations between the US and Europe have also seen ups and downs.
After US' conflict with NATO over military spending and its withdrawal from the Paris climate agreement and the Iran nuclear deal, it seems US-Europe relations are increasingly rocky. The main reasons for this rift are conflicts over not only practical interests but also values, which run deeper.
Specifically, the Trump-led US values unilateralism, whereas Europe is still a staunch defender of multilateralism. While Trump implements protectionism, Europe generally sticks with free trade. Trump even touched the bottom line over some major international issues such as climate change, over which general consensus has already been reached in Europe. It made Europe even more disappointed that Trump welcomes and is even willing to promote the moves detrimental to European integration, such as Brexit.
European society is also facing internal divisions. The EU, which insists on European integration, would never hope the "Trump effect" to further spread in Europe.
Peace and stability of the Middle East directly determines if European countries can have a stable social environment. However, Europe finds it very disappointing that the US has been fueling tensions in the Middle East recently.
The divisive attitudes in the US toward Russia and the US' limited response toward the Ukraine crisis have inadvertently pushed Europe up to the frontline against Moscow, which has become another reason for Europe's disappointment with the US.
When German Chancellor Angela Merkel and other EU leaders said that Europe can no longer rely on the US, they showed more confidence than before.
However, it's still early to say that the US and Europe will fall out, because Washington still dominates NATO on the strategic security level. In the short run, Europe does not have the strength yet to push the US aside and go it alone.
Europe and the US are highly interdependent economies. Unprecedented uncertainties brought about by the rise of emerging countries also make the continent dither. Moreover, the establishment in the US still respects Europe. So, for some time in the future, Europe and the Trump-led US will be like an estranged couple. For Europe, this might be the "labor pain" before a new global landscape is given birth to. The pain is strong, but they have no choice but to bear it.