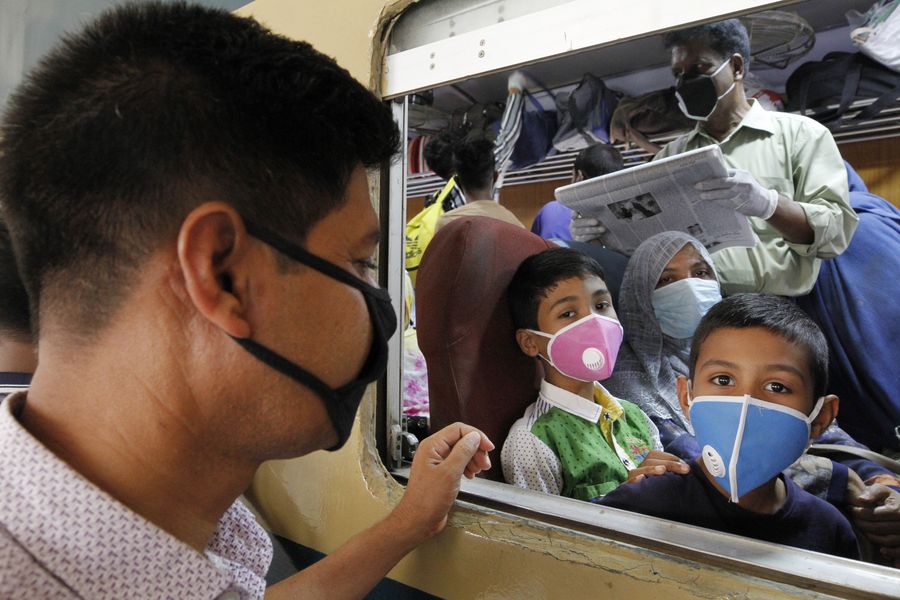 People wearing face masks are seen on a train in Dhaka, Bangladesh, on March 24, 2020. (Photo: Xinhua)

The COVID-19 pandemic has posed the biggest health challenge to humanity in a century. As of April 23, more than 2.7 million people around the world have been infected, and over 190,000 people have died, according to the count being kept by Johns Hopkins University.

At such a critical juncture, U.S. President Donald Trump announced his decision to halt funding to the World Health Organization (WHO), accusing it of "severely mismanaging and covering up the spread of the coronavirus."

Trump's announcement provoked a backlash from around the world. Taking such a harsh measure against the world's leading health body at a time when we need it most dims the chance of ending the pandemic at an early date. It would lead to cost more lives and cause more severe societal and economic consequences.

The WHO generally works worldwide to ensure people's health security and serve the vulnerable. Since the beginning of the COVID-19 outbreak, it has been leading the global fight against it.

It is working to help individual countries build up their capacity to prepare and respond, providing accurate information amid the infodemic together with numerous partners, ensuring supplies of essential medical equipment for front-line health workers, training and mobilizing health workers, and accelerating research on various health problems occurred worldwide.

The WHO has been sending major relief and vital medical supplies to all African nations, along with missions to Iran, Iraq, Egypt, Italy and Azerbaijan. It has also been shipping critical supplies to 151 and test kits to 126 nations. It has been facilitating 40 countries in Africa and 29 in the Americas to gain the ability to detect COVID-19.

Coordinated by the WHO, scientists, physicians, funders and manufacturers have come together to help speed up the availability of an effective vaccine.

Due to the U.S. decision, countries with weak health systems will suffer a lot, as the WHO might have to compromise with many programs due to a fund crunch.

People in vulnerable countries around the world will also be affected seriously in the long run as they are much more dependent on the assistance from the WHO. In particular, countries in Africa with roughly 26 million people living with HIV, and about 58 million children with malnutrition will bear the brunt.

In Bangladesh, hundreds of thousands of refugees are under significant health risks. Due to their cramped living conditions and lack of access to clean water and hygiene services, they are often victims of communicable diseases like measles, cholera, diphtheria and other respiratory and skin diseases.

They require life-saving interventions such as vaccination and malnutrition prevention. This huge number of refugees might be badly affected by the American action against the WHO if it has to compromise with its programs.

WHO's performance in response to the pandemic might be scrutinized, but not at this moment. In the face of such unusual threat from the COVID-19, it is time for all to forget their grudges, rivalries and differences, but to protect mankind from such common and invisible enemy.

Without enough funding might be a cause for the suffering of millions of vulnerable people around the world. For the sake of humanity, the U.S. should reconsider its decision.

The author is the China correspondent of the Bangladesh Post.