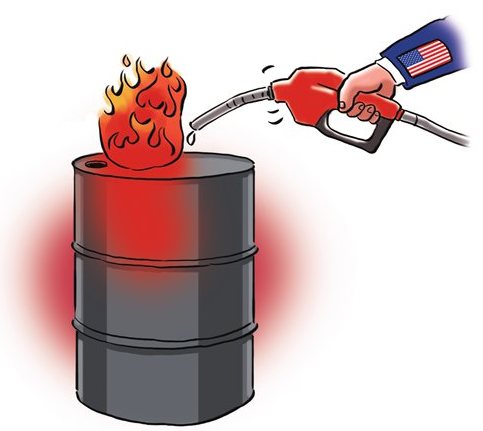 US President Donald Trump made a capricious announcement Wednesday, recognizing Jerusalem as the capital of Israel and saying the US Embassy might move there from Tel Aviv.The Jerusalem problem is at the core of the Palestine-Israel conflict, which is a perennial conundrum in the chaotic Middle East. In particular, the Old City of Jerusalem is home to some of the holiest sites of Judaism, Christianity and Islam. Through the ages, bloody conflicts have continued unabated, aggravated by highly sensitive politics. Five Middle East wars have erupted over the Palestinian issue, leading to mass casualties. Israel and Palestine reached a makeshift peace agreement after the Oslo Accords were inked in 1993. Recent years have seen little progress in advancing the peace process, but no large-scale wars involving many countries have broken out since then, despite frequent small skirmishes. With hotspot issues in other areas cropping up, the Palestinian issue has gradually been marginalized. How should this be viewed?On one hand, the major reason behind the marginalization lies in the change in attitude of Arab countries. Guided by the principle that all Muslims are brothers and driven by their own interests, Arab states have all along been important supporters of Palestine and also a critical party involved in the Arab-Israel conflict. However, with developments in Israel, changes in the regional situation and contradictions within religious sects, the Arab world has become divided and reluctant to take real actions. On the other hand, this marginalization also reflects the parties involved have come to terms with the status quo. The issue of Palestine boils down to a problem of territory, which involves multiple sophisticated contradictions, including religion, nationality and history. Now the parties involved have failed to work out a solution, they have to shelve it to gain temporary peace, which is a kind of balance agreed upon after a meticulous assessment. The balance is quite fragile and as it turns out, easy to break, perhaps just because of a decision by Trump. But solving the problem is difficult, as it requires not only individual heroism, but also efforts by regional powers with a neutral attitude, the willingness of both Israel and Palestine to compromise, and the support of relevant countries. Currently, these conditions are yet to bear fruit. Washington's influence upon the Middle East has gradually died away; reconciliation within Palestine has gained initial results; intractable regional and international problems are unnerving Arab states and the parties involved are struggling to deal with tough challenges that keep arising. By breaking the existing balance with this surprise maneuver, Trump is kicking the hornet's nest. For the two parties in the conflict, although Israel has made some achievements in regional diplomacy and has reached compromise and conducted cooperation with some Arab states, its position in the region will be more awkward because the US' partiality will not substantially help Israel but probably make it more isolated instead. The Palestinian government previously pinned high hopes on the US to help in the conciliation efforts, but Trump has brought the country into spotlight in another way. For the region, this move will intensify the existing complications. Palestinian refugees are found across Muslim countries and many Arab nations are involved. In addition, while the crises in Yemen and Syria have messed up the Middle East, bringing the issue of Palestine to the forefront is nothing short of adding fuel to the fire.  For Muslims around the world, Trump's decision will intensify the contradictions between the Muslim world and the West, as well as foster new extremism, anti-Semitism and anti-Americanism in the region. The large number of Palestinian refugees will exert further influence upon regional security once the extreme thought surrounding Jerusalem sprawls. Jerusalem is a byword for the most sensitive and sophisticated issue of all time. From the killing of the two-state solution, to the rhetoric that the Palestinian issue is not that hard, to the recognition of Jerusalem as the Israeli capital, Trump's Middle East solution is unchecked. But to achieve a remarkable result, Mr. President has to understand its difficulty, or he could continue causing trouble for the region.