Trump-Putin summit may find it difficult to unravel bilateral contradictions

The plan for a meeting between US President Donald Trump and Russian President Vladimir Putin came about after US National Security Adviser John Bolton visited Moscow last week. The two sides decided that Putin will meet Trump in Helsinki, Finland, on July 16, after their meetings at the G20 Hamburg summit and the APEC summit in Da Nang, Vietnam last year. 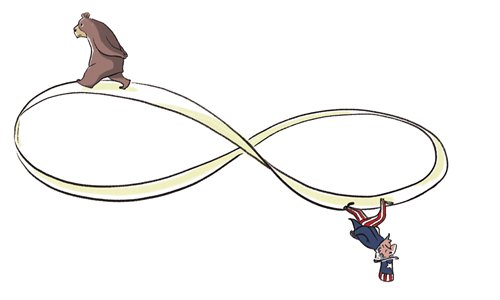 Since Trump took office, Moscow has held high expectations of better ties with Washington, which was reportedly the top task that Putin designated to the Russian Foreign Ministry. Trump, who appears to appreciate Putin, has never reprimanded the Russian leader in public and claimed to improve bilateral ties.

Unfortunately, things didn't work out as expected. US-Russia relations have seen no improvement but more conflicts. In August last year, Trump approved fresh sanctions on Russia with harsher measures in finance and energy sectors. The bill substantially reduces the president's power to waive or ease certain sanctions without Congressional approval, restricting Trump's space to enhance ties with Russia. The poisoning of ex-Russian spy Sergei Skripal earlier this year has put Russia and Western countries on the biggest collision course since the end of the Cold War. Over 20 Western countries expelled more than 150 Russian diplomats, and the US alone threw out 60 and ordered Russia's consulate in Seattle to close. In response, Russia expelled Western diplomats and shut the US consulate in St Petersburg.

In Syria, as the Islamic State nears its end, the geopolitical conflicts between Russia and the US that were veiled under anti-terror cooperation are surfacing. This year, about 200 Russian mercenaries were reportedly killed in US air strikes while later Washington launched attacks on Syrian government forces, raising the risk of military clashes between Russia and the US.

Putin told Bolton that US-Russian ties are "not in the best shape." More accurately, this diplomatic euphemism means that bilateral relations are in a terrible state. According to the White House statement, Putin and Trump will talk about bilateral relations and national security issues. Reports say that strategic stability will be one of the priority areas of the summit since it relates to nuclear parity and disarmament.

As the New Strategic Arms Reduction Treaty (START III) is set to expire in 2021, both US and Russia can extend it for another five years. But although Russia expressed its willingness for extension several times, the Trump administration that usually gives much importance to nuclear issues seems to take no interest. With more intense major-power competition, if the START III expires, the arms race will become fiercer and affect international security.

Russia and the US don't share common interests on most issues and have few things to cooperate on given their weak ties in economy and trade, possibly rising competition against the backdrop of booming US energy industry and their geopolitical contest in Eastern and Central Europe. Strategic stability may be the only issue that the two sides can have profound discussions about.

Meanwhile, as anti-Russia sentiment surges in the US, forces opposing Trump have been using the Kremlin to check the president, which has squeezed Trump's maneuvering room to improve Russian ties. In this context, there are slim chances that Trump and Putin will make a breakthrough on bilateral relations.

In the short- and medium- term, Russian-US ties will hardly turn around, let alone see a big improvement. The underlying reason lies in the fundamental contradictions in their goals. They had a short honeymoon period after the Soviet Union dissolved, but relations strained later. While the US wants to turn Russia into a middle power of Europe that integrates into or at least poses no threat to the West, Russia seeks to rise to a pole of the world. Their relations have spiraled down. The contradictions cannot be addressed in the foreseeable future, hence bilateral ties won't see any major change.

Both Putin and Trump want to improve ties. If they can be pragmatic during the summit and do not set unrealistic goals, they will likely be able to control the downward spiral in relations. In particular, US midterm elections in November will be highly relevant to ties with Russia. A Republican victory can help Trump cement his position and gain some space in managing relations with Russia.

The author is assistant research fellow at China Institutes of Contemporary International Relations.