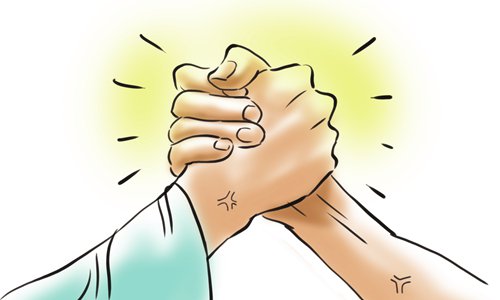 Who would be the involved parties of a trade war? The answer is quite simple - the US and China - not that others would not have a stake in such a conflict. But it would mainly be driven by the US and China. It is becoming dangerous as the US stance mixes geopolitical rivalry - to be managed by diplomats - and economic rivalry, which should be handled according to rules-based competition.

Trade tension between China and the US has happened before. But this time US President Donald Trump has made an argument that the US trade deficit is bad for the US, that the main cause of this deficit is China and that the China-US trade imbalance has to do with the fact that China does not play by the rules of international trade. These are the three elements to this argument. Be they geopolitical tensions on one side or economic tensions on the other, nothing is really new or surprising. What is new and surprising is their combination. The US president makes a clear connection between these issues. That's the danger. I happen to believe that the geopolitical tensions mentioned are both inevitable and manageable: take Taiwan, North Korea, the South China Sea and reform of the UN Security Council. There are clear differences between a US geopolitical position and a Chinese geopolitical position: manageable and negotiable differences. On the economic side, in many ways, it is more difficult. The reason why it is more difficult is that you do not negotiate a trade deficit. You can negotiate whether the US is providing weapons to Taiwan and which sort of weapons, but not how many iPhones are assembled in Chengdu to be exported to the US. You can manage geopolitical tensions. You cannot manage trade, contrary to what the US president believes. If you look at the US trade deficit, it has been there consistently over the last 30 years and accounts for 2-4 percent of US gross national product. It is a structural feature of the US economy which stems basically from the fact that Americans consume more and save less in comparison to average behavior in a capitalist market economy. It so happens that Chinese behavior is the other way around: Chinese save more and consume less. Their habits lend to a trade deficit for the US and a trade surplus for China. In my view, it makes little sense to argue that the US trade deficit results from the US consuming products from abroad, thus losing jobs at home. I believe the danger of the US position is that it relies on a wrong explanation of how trade operates in the 21st century. This is a danger because most of the countries on the planet share a different view which has been around a long time and is the goal that unites members of the World Trade Organization: Trade is a win-win game. Most countries on the planet share a consensus while suddenly the US is moving to another planet, in which imports are bad and exports are good. The economy that we have in the 21st century is not that of the Middle Ages. When our understandings of the fundamental issue are so different, discussing it would be difficult. So what should we do?We, meaning the EU, China, Africa, Brazil, India, Indonesia and the rest, still believe free trade is a positive game and we want to play based on some fair rules and conditions. We believe in a multilateral trade system and this multilateral trade system needs proper administration and proper resolution for trade disputes.We should start with Plan A: Let's negotiate. After all, the US may have good reasons to propose that some rules of the system, the way we have organized the WTO and other trading systems for last 30 years need improvement. I would agree with that. I wish the rules of international trade were better, fairer, more precise and more balanced for developed countries, developing countries, small business and digital trade. Plenty of areas need improvement. A conversation, a negotiation or a deal would be welcome. So the US' problems with the system can be expressed. Then the rest of us explain our problems with the system as we see it. And then the negotiations can start. That's Plan A. That's the one I think should be the main option. Now we have to also look at Plan B, which is what happens if Plan A does not work, what happens if the US position is my-way-or-no-way. In other words, what if the US position is "I want to renegotiate the rules my way," which is not really a negotiation. We would have a problem as the US would be blackmailing the system. My-way-or-no-way is a threat to go back to the law of the jungle. It is negotiating with a gun to your head, which is not proper.There is another option: The WTO may exist without the US. I know this seems strange. I know the notion that a world trading system with the US not being a part of it is strange. But after all, the US has moved out of the Paris Climate Agreement and UNESCO. They still work. In reality, globalization is both a good thing and a bad thing. It is a good thing for some and it is a bad thing for others. But there are more winners than losers overall, even if losers must not be left aside. They need to be taken care of by proper public policies and social systems. So I think we should keep and protect the international system which has protected us from protectionism.