Trump’s empty promises meant for reelection, not to fight virus 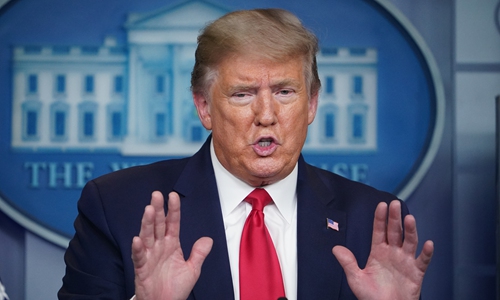 US President Donald Trump speaks during the daily briefing on the novel coronavirus at the White House on Monday, in Washington, DC. (Photo: AFP)

It has been a month since US President Donald Trump declared a national emergency in the wake of the coronavirus situation. On the day he made the declaration, he also made a slew of promises to defeat the virus. But an investigation done by the National Public Radio (NPR) shows that "few of the promises made that day have come to pass."

For instance, the president suggested that there would be cooperation between the federal government and private companies for drive-through testing, but the testing was largely non-existent.

Trump also promised that Google was working to develop a website to determine whether a COVID-19 test would be warranted, but no such thing has been developed by Google, NPR reported.

What prompted the failure of fostering a public-private partnership as Trump promised? Do Trump and his federal government lack the will, or the ability, to do so?

Let us not forget this year is the US presidential election year. Trump's policies are bound to be aimed at attracting more voters and a basic strategy is to make seemingly beautiful promises. His declaration of national emergency was nothing but a matter of expediency, and what happened to the US in the following weeks shows how ineffective his declaration is - the US was the first country to report over 2,000 deaths in a single day, and became the country with the most deaths.

In an election year, Trump can hardly cast his attention on the current coronavirus crisis even it is posing a challenge to his presidency. Instead of fulfilling promises of a mobilization of public and private resources to counter the virus, he has injected his energy into the campaign and tactic he could adopt to beat his adversary.

The hypocrisy of US election politics will inevitably make the president's promises more of a show, and once these promises only serve as campaign slogans, the extent to which they will be fulfilled will substantially decrease.

Another reason points to the US system - is it able to cope with such an infectious disease as the COVID-19? While the system has a high level of decentralization that has been baked into the US constitutional order for centuries, there has been no organized national government response to slow the spread of the coronavirus. What is notable is that the desperate New York governor turned to the federal government for help, but the latter just sat idly. In a tweet, Trump claimed that the federal government is nothing more than a "backup" for the states.

Meanwhile, as the NPR article pointed out, although the federal government needs the help of the private sector, it has only limited power over those companies. And under the free market doctrine, the core of American capitalism, only economic interests will be pursued instead of following federal government guidelines. This will weaken the execution power of those guidelines, let alone the guidelines not being sincere enough.

Public health crises do not happen often, but once they do, they expose the various flaws of a system. It remains to be seen how the US reforms its system to address the flaws, or just looks for a scapegoat.