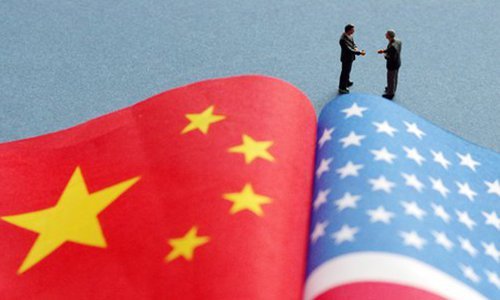 Chinese and US trade officials make attempt at striking a trade deal to defuse an increasingly bruising trade war that has rattled global markets and presented mounting challenges to both economies. (Photo: VCG)

Chinese analysts said on Sunday China does not consider US President Donald Trump's new tariffs threats credible, and regarded the threats more of a distrac-tion to deflect blame over his incompetence in the face of the coronavirus epidemic and part of his reelection bid.

Trump said on Thursday his hard-fought trade deal with China was of secondary im-portance to the coronavirus pandemic. He threatened new tariffs on China, as his ad-ministration crafted retaliatory measures over the outbreak, Reuters reported on Friday.

Trump's remarks sent jitters to the market, prompting US stocks to end the week lower, with the Dow Jones industrial average tumbling 2.55 percent on Friday, as investors fear renewed tensions between the US and China.

Gao Lingyun, an expert at the Chinese Academy of Social Sciences in Beijing who closely fol-lows the trade negotiations, said President Trump's remarks concerning new tariffs should be taken with a grain of salt.

"Actually, at the current level of existing tariffs, Trump's hands are tied. He could not impose new tariffs without hurting the US more than hurting China or inflicting equal damage," Gao told the Global Times on Sunday.

The US has maintained tariffs between 7.5 percent and 25 percent on about $370 billion worth of Chinese goods, including many China-made anti-pandemic products.

These tariffs have caused US importers some $59 billion since March 2018, data from US Customs and Border Protection showed. The fact that the tariffs pressuring US companies' cash flow is more troublesome in the context of current economic difficul-ties brought along by the COVID-19 pandemic.

A Reuters report said suspending the tariffs or delaying their payments would free up to $3 billion of cash per month for US firms, citing a report by a US consultancy.

And should the US raise new tariffs on ground other than what China promised to do in the phase one trade deal, China could respectfully terminate implementing the deal as it was already dishonored by the US side, Gao said.

Then the two will return to what happened in 2018, hurting each other without getting anywhere, noted Gao. "And China is prepared for such a scenario."

"It is outrageous for him to do this when the global economy is already in crisis," Sang Baichuan, director of the Institute of International Business at the University of Interna-tional Business and Economics, said on Saturday.

Sang said that Trump's words are nothing but a farce, and there is no need to even re-spond to him.

Sang found Trump's words are beyond reason since, as an expert on bilateral trade, he understands that everything should be done to return to trade negotiations. Trump's re-cent allegations suppress them.

Besides tariffs, reports say the Trump administration is having preliminary discussions, including sanctions, new non-tariff trade restrictions, and a possible effort to lift China's sovereign immunity to file lawsuits against China.

Zhu Feng, an international affairs expert, told the Global Times on Saturday that Trump is eager to find a scapegoat for the pandemic's impact on the economy and his administrations' reputation for handling the matter.