OPINIONS Trump’s WeChat ban to strangle US businesses in China

Trump’s WeChat ban to strangle US businesses in China 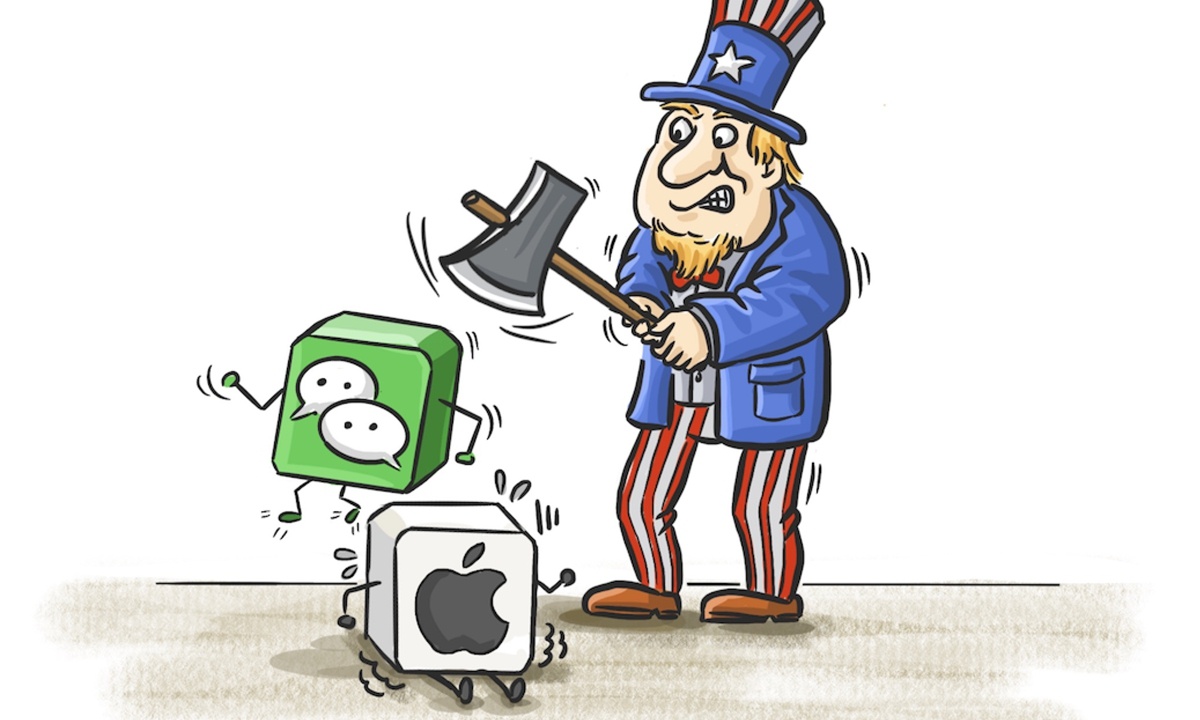 Concerns over the Trump administration's proposed WeChat ban, which could go into effect later this month, are growing, as Trump's deadline for the forced sale of TikTok US operations also draws near. Though the fate of TikTok's US assets is unclear, what's certain is that Trump will strangle US businesses in China, if he recklessly moves to ban WeChat.

Unlike TikTok, WeChat as a messaging app doesn't have a wide installment among US residents. However, it is nearly irreplaceable for overseas Chinese and US individuals or businesses which maintain close connection with Chinese consumers in this market.

Even Fox News, which is normally a Trump-supporter, pointed out in a report titled "Trump's WeChat ban endangers US businesses in China" that the mobile payment platform has become ingrained in Chinese society.

So, ditching WeChat will simply get a good number of American businesses' daily operations in serious trouble.

Picking on WeChat is mainly driven by Trump's enmity toward Chinese tech firms. However, the move will inevitably backfire. Besides overseas Chinese losing an important communication platform with their relatives and friends in China, it is the US businesses which will bear the brunt of a ban by Trump.

For instance, US firms operating businesses in China will face imminent difficulties in daily transactions and communications with their clients. Outlets in the US which have installed WeChat payment services may see declining Chinese customers.

And if a day comes when Chinese consumers have to pick sides between Apple and WeChat, it will cost Apple dearly in its most important overseas market, as WeChat has over one billion active monthly users in China.

A recent survey conducted by the American Chamber of Commerce (AmCham) in Shanghai revealed that 88 percent of 142 respondent firms anticipated negative impact on operations stemming from the loss of WeChat as a communication tool, Reuters reported.

The survey also revealed that despite a rise in US-China tensions and a slowing economy in 2019, American businesses in China remained profitable, with 78.2 percent of companies reporting profits, and about 50 percent of the respondents reporting revenue growth in 2019 slightly or significantly higher than rest of world.

The global economy has developed into a stage with firms operating interdependently. No matter it is the ban on TikTok or WeChat, US firms will be impacted to different degrees. Even Hollywood could not avoid the fallout, as WeChat has been an ideal approach for new movies to reach the potential audiences in China.

In the run-up to the US presidential election, Trump may intensify his crackdown on Chinese firms. As for Chinese firms, efficient preparation needs to be in place in this critical moment in order to hedge the risks, including protecting their legal interests with law, enhancing coordination with related Chinese authorities, as well as shoring up international talent groups.

The article was compiled based on an interview with Huang Rihan, assistant dean of the College of International Relations at Huaqiao University.