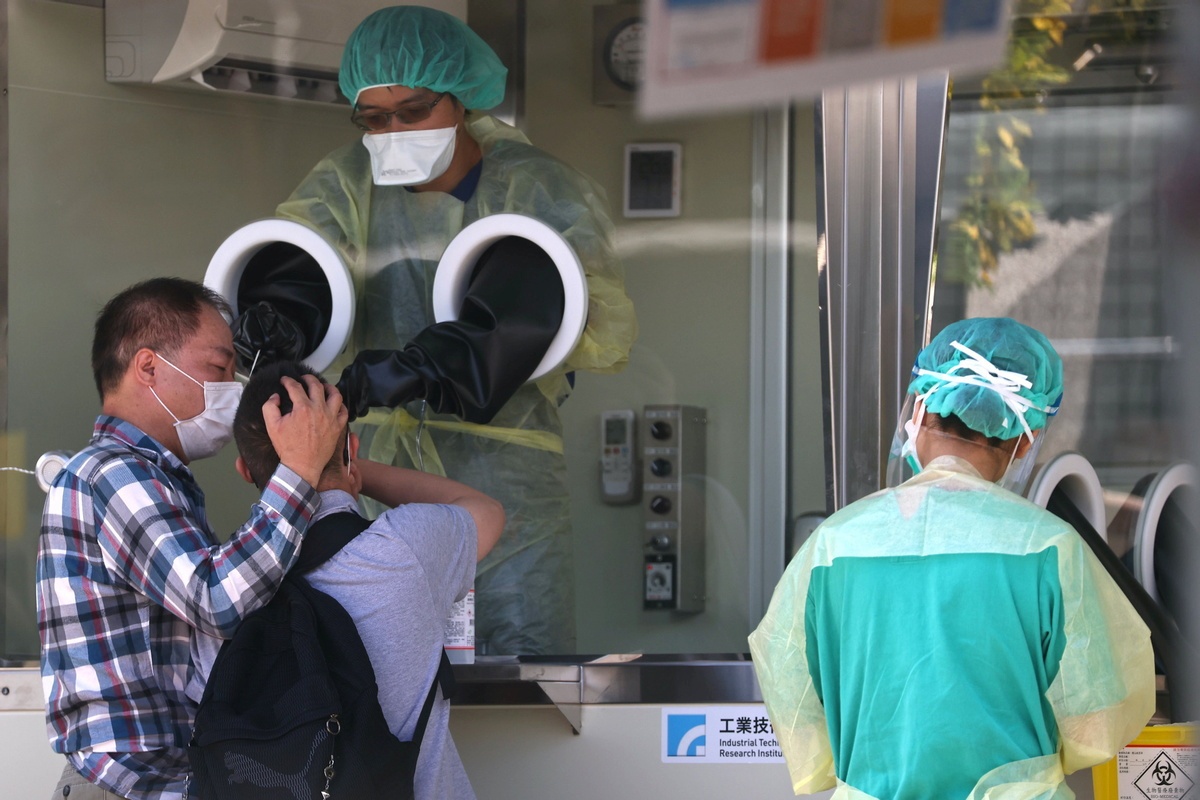 Medical workers use a rapid test for COVID-19 on a Taiwan resident following an increasing number of locally transmitted cases in Taipei, on May 25, 2021. (Photo: Agencies)

The visit of three US senators to Taiwan under the pretext of supplying the island with vaccines was a deliberate provocation.

The Chinese mainland offered to provide Taiwan with domestically made vaccines immediately after the epidemic situation on the island began to worsen in late April. It hoped the supply would help ease the island's vaccine shortage, as the administration has so far vaccinated only around 3 percent of its 23.5 million population.

Yet the gesture of goodwill has been rejected by the independence-minded Democratic Progressive Party government on the island, despite it not having gained the upper hand over the novel coronavirus. On Sunday, Taiwan reported 343 new local infections and 36 new deaths.

While the timely offer of assistance serves to show how people on the mainland care about the well-being of Taiwan compatriots in a time of difficulty, the Tsai Ing-wen administration's rejection of the offer serves to highlight the callousness of the DPP. It comes as no surprise as for years it has prioritized trying to alienate the island from the mainland at the expense of the well-being of the island's residents.

The excuse that it has used to shun the mainland's offer of vaccines, that they are not safe enough, is ridiculous given that the vaccines offered by the mainland have been authorized by the World Health Organization for emergency use and over 400 million people have been vaccinated on the mainland without any problems. There is no escaping the conclusion that the DPP administration is willing to let more residents on the island die because of a shortage of vaccines rather than let the mainland demonstrate its concern for people.

In stark contrast to its attitude toward the mainland, the DPP responded with slavish devotion when the United States said it will donate 750,000 COVID-19 vaccine doses to Taiwan. "Your assistance will be etched on our hearts," Tsai said on Sunday when receiving the three US senators, yet another provocative step taken by Tsai and the US to test China's bottom line on Taiwan, after the already expanded US military assistance to and high-level contacts with the island.

Even though details of which vaccines Taiwan will get or when they will be available have not yet been disclosed, for her, the three-hour visit is more important than the vaccines, especially because the senators arrived aboard a military plane, which sent the wrong signal to the secessionists on the island, thus fueling the frictions in cross-Straits relations.

The Taiwan authorities and Washington are well aware that the use of a military aircraft would be provocative and cause a stir. But that seems to have been the intention. Tsai needs to divert attention from the epidemic situation on the island, and the US wants to rub China the wrong way without going too far. But while they are playing their games, people on the island are dying from COVID-19.