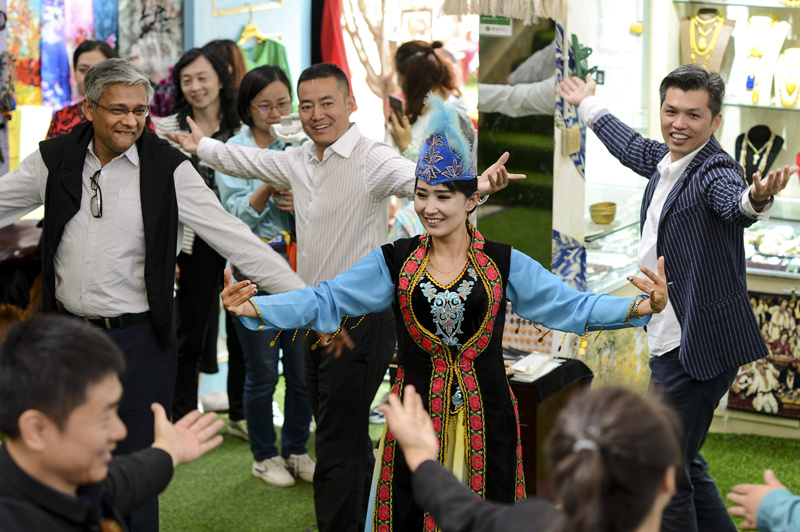 The owner of the tourism site Guli's Home dances with visitors in the ancient city of Kashgar in Northwest China's Xinjiang Uygur autonomous region in May. Guli's Home, a local resident's yard that has been converted for tourists, has become a hot attraction for visitors who want to experience everyday life in Kashgar. (Photo: Xinhua)

Editor's note: In a statement released on Saturday, Turkish Foreign Ministry spokesperson Hami Aksoy criticized China's vocational training centers in the Xinjiang Uygur autonomous region, saying they were "a great shame for humanity" and called on the international community and the United Nations to end this alleged "human tragedy". Is Ankara's criticism valid? Why has Turkey taken such a stance toward China's Xinjiang policies? Two experts share their views on the issue with China Daily's Liu Jianna. Excerpts follow:

That Ankara's statement contains distorted facts about the vocational training centers speaks of its Pan-Turkism ambitions. In fact, Ankara has always made its subtle relationship with Uygurs in Xinjiang — some of whom have relocated to Turkey — a bargaining chip in its dealings with Beijing.

Turkey may stop provoking China once Sino-Turkish ties strengthen. Otherwise, Turkey may continue to allow Xinjiang separatists to hold rallies and carry on separatist activities within its boundaries to pressure China into acceding to its unreasonable demands.

Although unlikely, Turkey may have taken a stance against China's so-called maltreatment of the Uygurs owing to the clamor in the West over the vocational training centers in Xinjiang.

Turkey's statement is not only full of misunderstandings and untruths but also vilifies China's policies and actions in Xinjiang. For instance, the Turkish statement claimed that the folk poet Abdurehim Heyit is "dead", although, as evidenced in a video clip released by China Radio International shortly after Aksoy's statement, he is alive and in good health. And the training centers Aksoy has criticized have actually helped many Uygurs master vocational skills that have improved their job prospects.

Unfortunately, just like some Western media outlets resort to distorting facts while covering the Syrian civil war, Ankara too has twisted facts about Xinjiang to target China.

Given the anti-China propaganda being spread by the West and Turkey, China should firmly refute Turkey's allegations of what's happening in Xinjiang, and tell Turkey and the rest of the world that the Xinjiang issue involves China's core interests and is subject to no one’s interference.

Ankara's mistakes may eventually take a toll on bilateral relations. But China should stick to the policies and measures that will benefit Uygurs in the long run and promote Xinjiang's overall stability and prosperity.

At the same time, China should continue to present more facts to clear up the misunderstandings, as well as refute the slander doing the rounds of the international community. It would take a long time to reduce the West's deep-rooted mistrust of China when speaking of Xinjiang, though.

Li Weijian, a senior research fellow at the Center for West Asian and African Studies and Institute for Foreign Policy Studies, Shanghai Institutes for International Studies

Given Turkey's role in the development of Xinjiang separatist movement, Aksoy's statement is regrettable, yet not surprising. Many separatists including Isa Yusuf Alptekin have fled to Turkey to carry on their secessionist activities to split Xinjiang from China.

Although it comes as no surprise that Ankara has issued such a vile statement against China's Xinjiang policy, the statement is not only baseless but also uncalled for. The training centers in Xinjiang are designed to, and do, promote awareness of law among the Uygurs and improve their life prospects by helping them to learn vocational skills and hone their language ability.

Moreover, considering how Turkey treats the Kurds, it is not in any position to judge China's human rights practice. So instead of smearing China, Turkey should focus more on resolving its domestic human rights issues.

Thanks to the better and more stable security situation over the last few years, Xinjiang has made considerable progress, registering a GDP growth rate of 6.1 percent in 2018. While it is easy for China-baiters in the West and Turkey to make erroneous judgments, people harboring doubts about China and its Xinjiang policy should visit the region and see the truth for themselves.