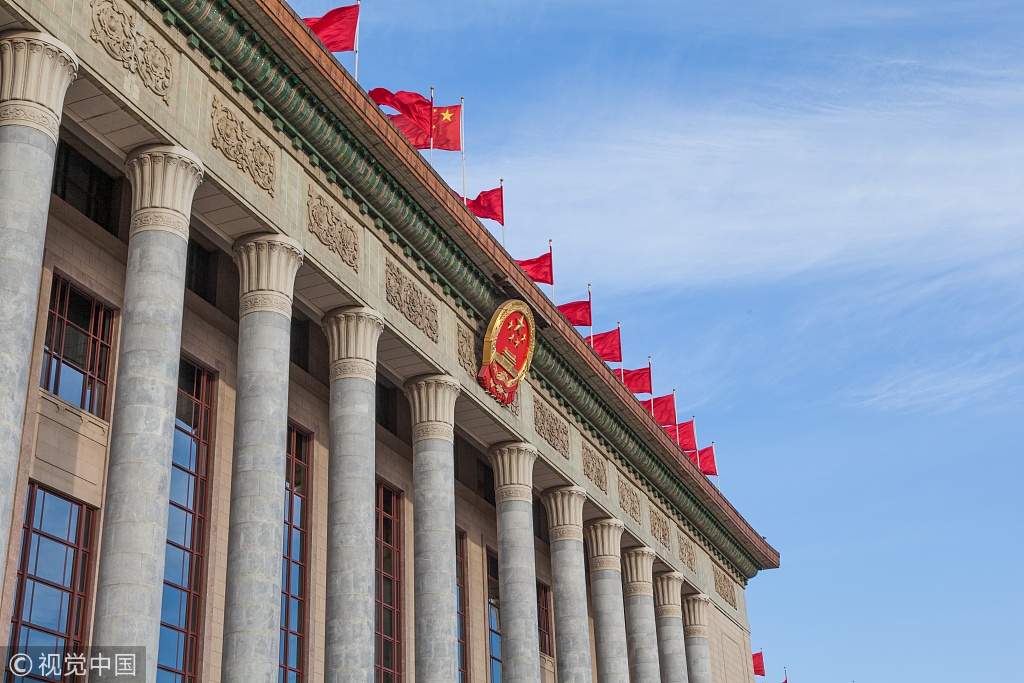 The Great Hall of the People in Beijing. [Photo/VCG]

The Chinese People's Political Consultative Conference (CPPCC) is a political advisory body in the People's Republic of China. The body traditionally consists of delegates from the Chinese Communist Party and its allied front organizations, eight legally permitted political parties, as well as nominally independent members.

The role that CPPCC plays in the Chinese government is stated in the preamble of the PRC Constitution. In practice, its role and powers are somewhat analogous to an advisory legislative upper house and there have been proposals to formalize this role in the PRC Constitution, making its National Committee a de facto national senate and its committees in all of the administrative divisions the upper chambers of their respective legislative branches.

Two sessions, typically held annually in the month of March, is an important platform in the Chinese governance system where the previous year's performance report is presented and planning for new years are discussed and finalized.

This year, the fourth session of the 13th National Committee of the Chinese People's Political Consultative Conference (CPPCC), is scheduled to be held on Thursday in Beijing.

The proposed agenda for the session includes hearing and deliberating a work report of the Standing Committee of the CPPCC National Committee and a report on how the proposals from political advisors have been handled since the previous session.

Members of the CPPCC National Committee are expected to sit in on the fourth session of the 13th National People's Congress, which is scheduled to open on Friday, as nonvoting participants.

They will hear and discuss documents including the government work report and the draft 14th Five-Year Plan (2021-2025) for National Economic and Social Development and the Long-Range Objectives through the Year 2035, according to the proposed agenda.

As China has entered into new stage of developments and geopolitics has changed rapidly, China's role as global leader is very much visible and undeniable. In this context, this year's two sessions are even more important. The expected challenges for China might be huge and this platform will have to address all possible challenges and their solution. It might be a tough task, but the CPC is mature enough to tackle all the challenges. This year is the 100th anniversary of founding of the CPC, a mega event to celebrate the achievements of the CPC.

China is a ray of hope for developing countries, which support China in its efforts in sustainable development. China is playing a positive role in peace and security globally. China's success in the elimination of poverty in China and contribution to global poverty eradication is widely admired. China has become a major contributor to the global economy and development. The two sessions may cater to all these aspects including China's new role in the international arena.

Zamir Ahmed Awan is a senior fellow with the Center for China and Globalization (CCG) and a Sinologist at the National University of Sciences and Technology in Pakistan.