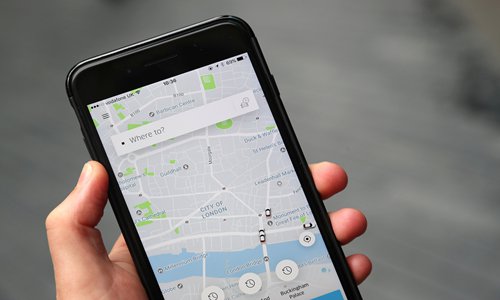 The Uber app is seen on mobile telephone in London in September, 2017. (Photo: VCG)

Uber Technologies' revenue grew by 30 percent in the most recent quarter. Chief Executive Dara Khosrowshahi even expects a profit in 2021, he said on Monday.

But which revenue, and which profit? Investors in the $53 billion ride-share company have a dizzying array of financial metrics to choose from - and a new split into five reporting divisions has added a few more.

The numbers that reflect activity by Uber's customers and passengers, from gross bookings and trips to revenue and adjusted net revenue, are all growing at a healthy clip. Other important figures remain stubbornly negative. Uber burned $2.5 billion of cash just to operate thus far this year. It has enough cash to keep up that rate for four more years - but that's a prerequisite for staying in business, not a boast. The main business of matching drivers with passengers made $631 million of EBITDA in the most recent quarter, 52 percent more than a year earlier, but only on a heavily and flatteringly adjusted basis.

Uber, like rival Lyft, now thinks it can be profitable in 2021, and the company narrowed its estimated loss for 2019 - but again, only on that adjusted basis, which ignores items like stock-based compensation and doesn't reflect many of the costs of investing in the business. The food-delivery business Uber Eats is growing revenue three times as fast as the ride-hailing business, but lost $316 million in the third quarter on an adjusted EBITDA basis and has the potential to become a real drain. Rival Grubhub warned last week about "promiscuous" consumers of takeout meals playing rivals off against one another.

In the short term, there are other considerations, like the restriction on selling stock that ends on Wednesday, when shares held by early investors in Uber become available to buy - or sell. A similar watershed helped wipe one-fifth off the value of vegan-burger maker Beyond Meat last week, and its shares have yet to recover.

And Beyond Meat's shares were trading at multiples of their price when the company went public earlier this year, whereas Uber's were down nearly 30 percent as of Monday's close.

Uber can slice its earnings any way it likes. But it remains hard to find clues on the big questions, like whether the company can sustainably make money, and whether insider shareholders will stick around.