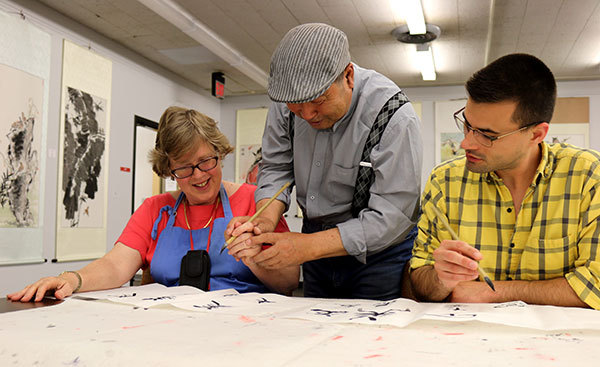 Liu Shuling, a Chinese artist (center), teaches two Western Kentucky University faculties how to hold a brush after lecturing at the university's Confucius Institute in Bowling Green, US, May 5, 2017. (Photo: China Daily)

That the US administration on Thursday ordered the center which runs the Confucius Institutes in the United States to register as a "foreign mission" of the People's Republic of China is obviously another move by Washington to initiate an ideological confrontation with China, pushing normal cultural exchanges between the two countries to the brink of severance.

Given the Cold War mentality that prevails in Washington, it was no surprise that US Secretary of State Mike Pompeo should justify the move by claiming in a statement that the Confucius Institute US Center is "an entity advancing Beijing's global propaganda and malign influence campaign on US campuses".

Although Assistant Secretary of State for East Asia and Pacific Affairs David Stilwell said when making the announcement that "this is not going after the Confucius centers per se", he urged US universities to take "a hard look" at what the institutes were doing on their campuses and then decide for themselves if they advance "our democratic values or not". It is this over-politicization of almost everything Chinese and the narrow-mindedness it embodies that have become hallmarks of this administration and fueled its confrontational stance toward China.

Such accusations against the Confucius Institutes are without basis and are motivated by "ideological prejudice and self-interest", as Chinese Foreign Ministry spokesperson Zhao Lijian said. He stressed that "Confucius Institutes are bridges and links that help people from all over the world learn Chinese and understand China".

Steve Knapp, who was president of George Washington University and served as the president of the US center council, the governing body of the CIUS, said when the center was unveiled in 2013 that the Confucius Institutes provide a unique platform for invaluable cultural educational opportunities for students and faculties across the United States.

About 500 kindergartens through 12th grade classrooms are affiliated with the Confucius Institute US Center, and the institute also operates on 65 US campuses, they have contributed a great deal to the teaching of Chinese language and cultural exchanges between the two countries and two peoples.

With the strong capacity of the US to have a cultural impact on other cultures, it is strange that some US politicians should fear the teaching of Chinese. Why should they be so afraid of the influence of China when their own culture is so pervasive?

It is because of China's ever greater opening-up to the world that an increasing number of foreigners, Americans included, want to know more about Chinese culture and learn the Chinese language. There is no evidence that such teaching has ever been used as a tool of political propaganda. And the establishment of Confucius Institutes was at the request of the US universities and was to meet the needs of US students.

It is the paranoia of politicians in Washington that is the reason why everything, even the teaching of the Chinese language, is politicized to stigmatize China.