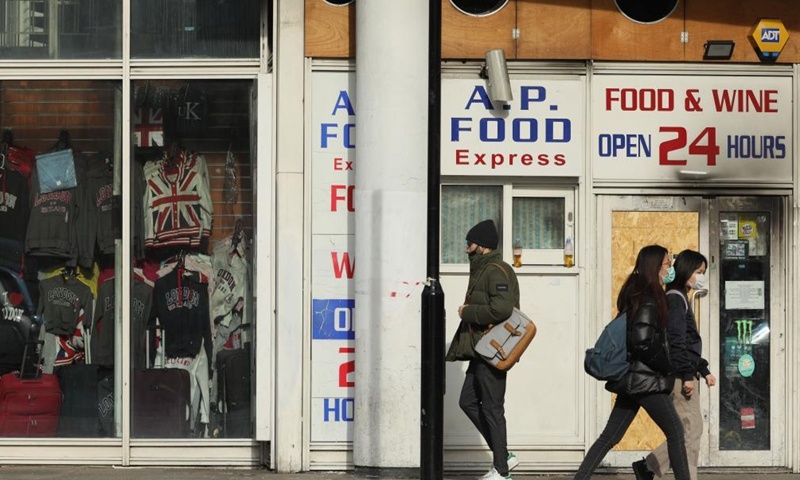 People walk past a closed shop near London Waterloo train station in London, Britain, on April 9, 2021. COVID-19 deaths in Europe surpassed the one million mark on Friday, reaching 1,001,313, according to the dashboard of the World Health Organization's Regional Office for Europe. (Photo:Xinhua)

Some Western politicians have long trumpeted their support for free trade, but in reality, its becoming common to see them issue prejudicial warnings against normal trade practices that go against their political interests.

The latest example of such phenomena is the remarks made by UK Trade Secretary Liz Truss during an interview with Politico on Wednesday. The UK must not become "dependent" on trade with China, the trade secretary said, while acknowledging the necessity of maintaining economic and trade relations with China.

Her comments come just one day after the Office for National Statistics released the latest data indicating that China overtook Germany to become Britain's biggest single import market in the first quarter of this year. China is already Britain's second-largest trading partner, just after the US.

At a time when the business community of the two countries may feel a sense of relief at the trade data - a telling of the fact that the deterioration in China-UK relations doesn't seem to have affected bilateral economic and trade cooperation so far - it is clearly not a good sign to see a top trade official signal discouragement toward its trade ties with a major trading partner, which may send jitters through the markets at both sides.

If such strong trade momentum had occurred between Britain and any of its allies, then the trade secretary would surely have expressed support for trade instead of a politically-biased warning.

From another perspective, since the China-UK trade actually hasn't reached a level which would constitute so-called dependency, the trade official's concern may only underscore the fact that the growth potential of China-UK trade has not been fully unleashed. Without political interference, it is entirely possible for bilateral trade cooperation to reach a higher level in the future.

During the Golden Era of China-UK relations a few years ago, British politicians repeatedly emphasized the importance of a closer economic partnership with China. Now after officially leaving the EU and under the impact of the global pandemic, it is apparent that the UK may need China more than ever, but why are British politicians so resistant to their domestic market choice now?

Take China-UK trade as an example. It is not the so-called "controversial trade practices" by China that underpinned the bilateral trade, but China's economic resilience to the pandemic impact. China is the only major economy that achieved positive growth last year, and as the Chinese economy continued to recover, its fast-growing trade has also driven the growth in other trading partners accordingly.

Moreover, China has long been supportive of WTO reform and free trade by participating in a series of high-standard trade and investment agreements. It would be nothing but regrettable if UK trade officials turned a blind eye to China's efforts toward free trade, but it is not China's fault and won't affect its trade prosperity at all.