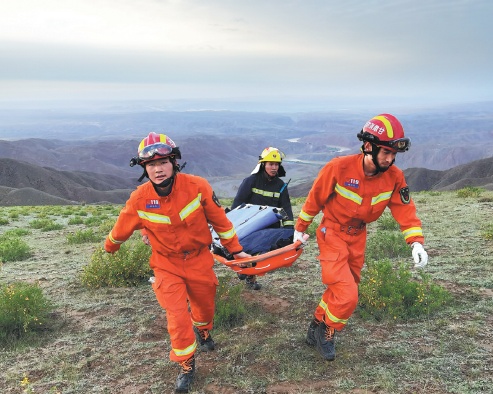 The recent news that 21 Chinese ultra-marathon runners died after extreme weather hit a long-distance mountain race in Gansu, Northwest China, has shaken the world of running, both in China and beyond.

While an official investigation is already underway, the country's General Administration of Sport on Wednesday announced the suspension of all ultra and long-distance running across the nation, with immediate effect.

Experts say the tragedy will unquestionably cause ripples in the way running is organized in China, with better governance, monitoring, and regulations being at the forefront of future races.

"There is no doubt this level of incident will result in some reforms of the Chinese distance running market," said Mark Thomas, managing director at S2M Consulting, a China-focused sports events company.

Claudio Rocha, a lecturer in sports management at the University of Stirling, echoed the view, saying: "While it should never take a tragedy of this kind to bring about change, I do think that this devastating incident can and should lead to improvements in the way in which marathons and ultra-marathons are organized in China and elsewhere."

"I believe the sports participation industry will continue to grow in China, and this tragedy will increase awareness of the potential risks among organizers and athletes themselves."

Long-distance running has become increasingly popular in China over the last few years. According to data from the Chinese Athletics Association, known as the CAA, there were 1,828 marathon events held in 2019, compared to 993 in 2016, while the proportion of officially certified events has been declining year by year.

In 2016, 328 out of the 993 events was officially certified by the CAA, accounting for slightly more than 33 percent, but the percentage dropped to less than 20 percent in 2019.

Simon Chadwick, a professor in Eurasian Sport at Emlyon Business School in France, said: "It might sound very harsh and cynical, but what happened in Gansu can present the opportunity for what has become a huge industry in China to step back for a moment and take stock of what happened.

"The sport has outgrown itself, because clearly, the rules, regulations, system of governance, monitoring and control－they have not kept pace with sometimes the very dangerous nature of the events that are now taking place," he added.

Chadwick is of the view that the standards and safety parameters within which the events can take place should be centrally imposed by the country's top sports authorities, rather than being decided by individual regions, race organizers, or sponsors.

"The government should take this opportunity now to develop and implement measures that ensure such tragedies do not happen again," Chadwick said.

Sports pundits say official approval of race events in China tend to be more dependent on the number of runners and public security, instead of athlete safety, and as a result, events with relatively small participation but potentially high risk can be authorized on a local basis, with little due diligence from national sports authorities.

Thomas, from S2M Consulting, who has been involved, both as a runner and an event promoter, in distance running in China since the 1990s, said: "This localization of authority has increased in recent years due to reforms that have relaxed central sanctioning powers to stimulate a 'devolved' sports economy.

"Certainly, there is a need for better governance and management all around," he said.

Li Yanning, lecturer in events management at the University of Surrey, pointed out that another key factor leading to the tragedy was "the poor, unprofessional event management, which did not have proper health and safety assessment in place".

"Health and safety should always be the top priority in organizing any events, no matter big or small," she said. "Having a contingency plan is absolutely essential when governments approve any event application."

Despite the recent tragedy, experts say such tragedies could happen in any country. "This is not a distinctively Chinese phenomenon, and it's the same in Britain," said Chadwick, adding that eight fell runners went missing in bad weather during a race in Snowdonia in Wales (in 2009), luckily without any casualties.

"Also, it is important to note there are many well-run marathons and ultramarathons staged in China every year that have impeccable safety records," added Thomas.