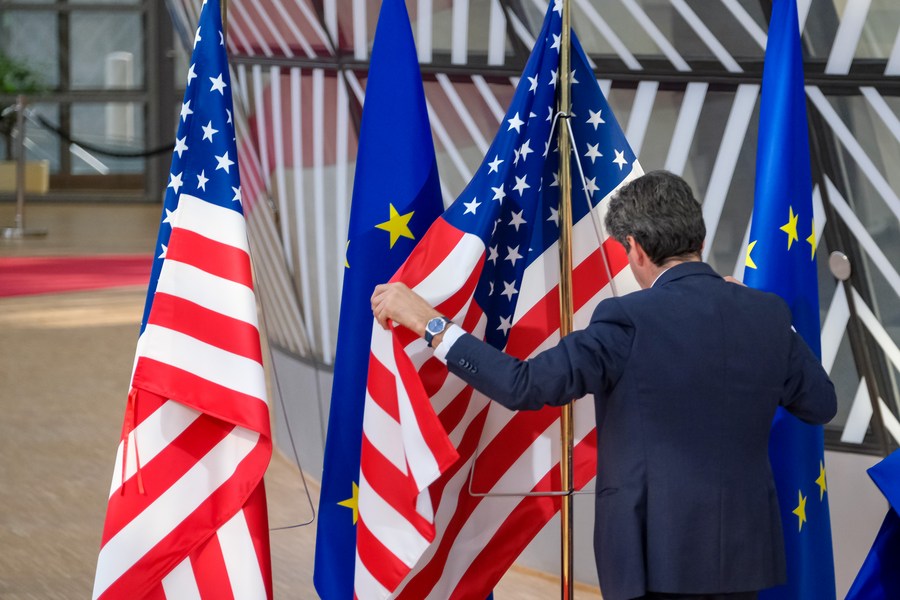 A staff member hangs a US national flag before US President Joe Biden arrives for the European Council meeting in Brussels, Belgium, March 24, 2022. [Photo/Xinhua]

A number of high-ranking officials of the European Union voiced complaints about the bloc's transatlantic ally over the weekend.

The criticism is directed at the US Inflation Reduction Act, which is set to pour billions of dollars into environmentally friendly industries in the United States.

European Commission President Ursula von der Leyen warned on Sunday that to be able to compete with the US' government-subsidized green industry, the EU must act to address the "distortions" created by Washington's $430-billion plan and step up state aid to its own companies.

The EU must "take action to rebalance the playing field where the IRA (Inflation Reduction Act) or other measures create distortions", Von der Leyen said in a recent speech in the Belgian city of Bruges. The act, which is purportedly designed to accelerate the US transition to a low-carbon economy, provides around $370 billion in green energy subsidies, as well as tax cuts for US-made electric cars and batteries.

Earlier, in an interview with Italian media on Saturday, European Council President Charles Michel also warned that many European companies will be drawn to the US, especially given the low energy prices there. With the US continuing to fuel the ongoing conflict between Russia and Ukraine, the EU looks set to endure high energy prices for a long time.

Hence, the EU is planning to adjust its state aid rules. "The Inflation Reduction Act should make us reflect on how we can improve our state aid frameworks and adapt them to a new global environment," Von der Leyen said.

The beggar-thy-neighbor approach of the US should have opened the eyes of EU leaders that the US for all its talk of shared values is not a team player. Uncle Sam is only interested in Uncle Sam. Any care or concern that the US shows to other countries is motivated by the calculation of how it can profit from such solicitude.

For Europe, which is suffering the collateral damage from the hostilities in Ukraine, this means paying through the nose for liquefied natural gas from the US. For all its talk of partnering with any nation that shares "our basic belief that the rules-based order must remain the foundation for global peace and prosperity", the US has repeatedly shown that it will break any rule and throw even its allies to the wolves, if it thinks it can gain some kind of advantage by doing so.

The "latticework of strong, resilient, and mutually reinforcing relationships" that the Joe Biden administration envisions is just pie in the sky for those gullible enough to believe that Washington is willing to offer others a slice.

The dire consequences of the Ukraine conflict and the new US investment plan should be enough to disabuse anyone naive enough to harbor the notion that Washington is looking out for their interests.