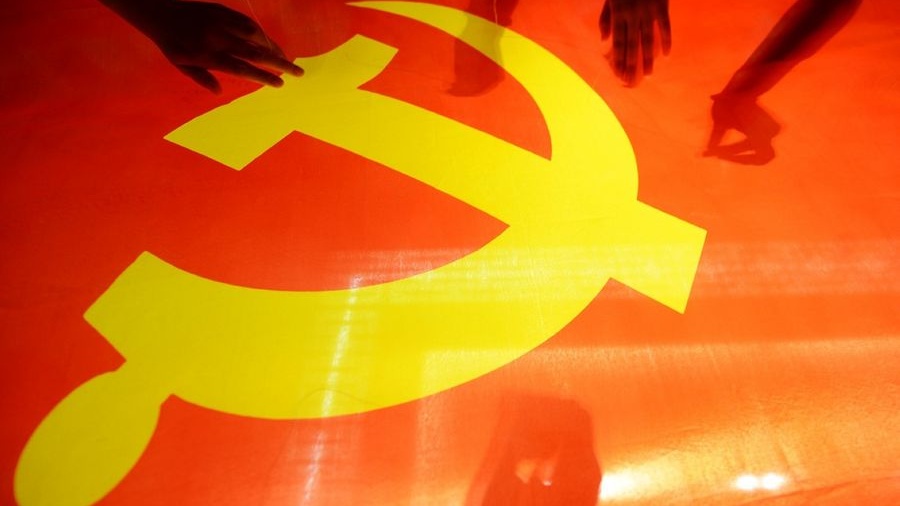 Sewn is a flag of the Communist Party of China in Tangwang Township, Jiangsu Province, eastern China. (Photo: Xinhua)

Editor's note: Lu Xia is an associate professor at the School of Marxism Studies and a research fellow at the National Academy of Development & Strategies, Renmin University of China. The article reflects the author's opinions and not necessarily the views of CGTN.

Established in July 1921, the Communist Party of China (CPC) has grown from a political party with only a few dozen members to a 91-million-member party that governs a country of 1.4 billion people. It has stood the test of time, reversing China's fate from the continuous decline since the Opium War in the 1840s to steady progress toward prosperity as the world's second largest economy. An educational campaign has been launched recently, with a specific goal of learning and publicizing the Party's glorious history among its members in particular and the entire Chinese society in general. The Party reviews its history not merely to take comfort in its success, but rather to learn the laws of history, improve its capacity to lead and govern, and withstand various risks at home and abroad.

As is shown in China's constitution and the Party's charter, the CPC is the leading Party of China. The Party is to the country what the nervous system is to the body, which has widely been considered as the key feature of China's political system. However, this system has long been criticized by the Western politicians and media with certain degree of prejudice. The Chinese government's response to COVID-19 has made many change their views about China's political system and the disillusions in the West.

A couple of points can be grasped if one seeks to understand this situation. The first and foremost point is that the Party's leadership has always been upheld and fulfilled. In the past, the Party has done significantly in saving the Chinese nation from occupation and exploitation by colonialism and imperialism, safeguarding China's sovereignty, security and development interests, and protecting and promoting the interests of ordinary people. In the new era, in addition to those, the Party's strong leadership has always come from combating corruption and ridding itself of any "ailment" that erodes the Party's legitimacy.

Being strong is necessary, but it is not enough; one needs to be effective as well. Perhaps the most distinguished part of China's political system is the degree of effectiveness. The fight against COVID-19 might be a typical case.

Since the outbreak of the novel coronavirus, the central authority has made a clear stand and strategy to contain the virus and save lives. With its strong organization, almost all the grassroots Party cells have responded in a short time. People from all walks of life have been mobilized to make contribution to the great cause – some providing logistical services, others trying to tackle scientific issues like making a vaccine, still others making efforts to recover economy. In the end, China emerged as the only major country in the world to post positive economic growth in 2020.

As per the theoretical part, in the past 100 years, the CPC has been insisting on theoretical innovation. From classical Marxism-Leninism in the beginning of the revolution to Mao Zedong Thought, from Deng Xiaoping Theory and the Three-Representative Theory to the Scientific Outlook on Development and the Xi Jinping Thought on Socialism with Chinese Characteristics for a New Era, advanced theories have been guiding China's revolution, socialist construction, reform and development. Perhaps the key to this innovation is that the Party always adapts to the ever-changing external context while retaining its advanced nature as a Marxist-Leninist party, sticking to socialism with Chinese characteristics and always putting people first.

In different periods, the CPC has never failed to take into account China's actualities while upholding and promoting Marxism-Leninism. From its abundant history, different generations of the Party's leadership have realized that success as well as truth never comes from pure theory but from the organic combination of theory and practice.

Therefore, if one examines the history of the CPC's theoretical evolution, one would find that Marxism-Leninism has been the consistent spirit. In addition, the Party's leadership has always managed to lead the Chinese people to effectively overcome obstacles and serious struggles by learning experiences and lessons from its own history, as it is convicted that the legitimate right to lead and govern goes with the full support of the people.