OPINIONS Understanding the legacy of May Fourth Movement through Xi's speech

Understanding the legacy of May Fourth Movement through Xi's speech 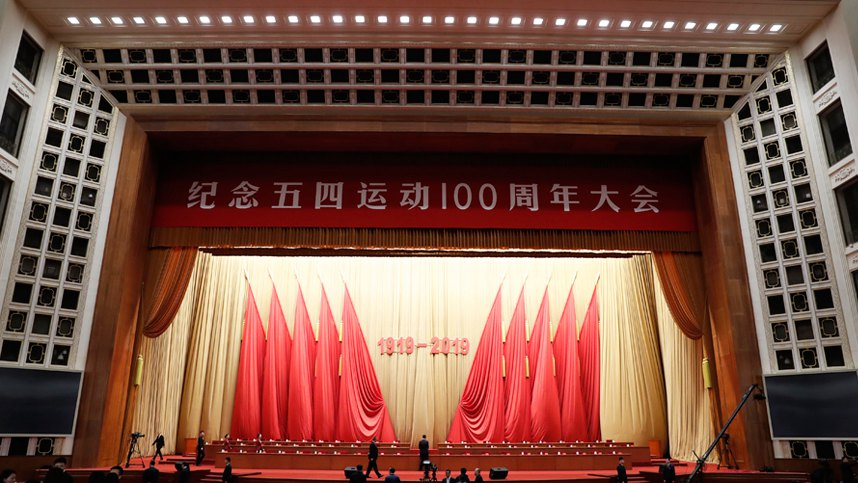 The ceremony marking the centenary of the May Fourth Movement at the Great Hall of the People in Beijing. April 30, 2019. (Photo: VCG)

At today's ceremony celebrating the 100th anniversary of the May Fourth movement, Chinese President Xi Jinping has delivered an important speech explaining the significance of the movement and has proposed requirements for the young generation today.

The movement a century ago is a patriotic social movement led and participated by younger intelligentsia and students, who would make an unsurmountable contribution to the establishment of the CPC itself and final success of the Party's revolutionary campaign that led to the founding of the People's Republic of China (PRC) in 1949.

Though there have already been abundant of literature and academic works devoting to the reviewing and analyzing of the major event, the understanding is still sort of scattered and disjointed. The whole story is yet to be told, and the significance is yet to be reemphasized. One of the points in President Xi's remarks at a group study session of the Politburo of the CPC that could be filled in the blanks is that after one century we should understand the May Fourth movement through a macro-history perspective, with a comprehensive and multi-dimensional view.

It first made Marxism a rapid-spreading ideology throughout China. As a kind of theory for the tackling of structural change of human society, Marxism has provided Chinese intelligentsia with the latest tool to explore the essential elements contributing to their motherland's status of being cruelly exploited and thus backward; while as a movement, Marxism has involved people from all walks of life to take part in great Chinese revolution, a task that previous ideologies and thoughts hardly accomplished.

Resulting from that, China has its own Marxist revolutionaries and followers for the first time due to the May Fourth event. The making of the cohort of Chinese Marxists was not an easy and single process; instead, it was a converging one of knowledge elites from different backgrounds.

The founding of the CPC was no doubt another grand achievement of the May Fourth movement. Scholars of the history of the CPC tend to argue that one of the major differences between Bolsheviks in Russian and the CPC lies in the fact that the former studied and discussed Marxism before founding a party while the latter the other way around. Despite the oversimplification, this argument still reflects certain urgency of a party to lead the proletarian revolution in early 20th century China.

The founding of the CPC has a huge impact upon Chinese sociopolitical situation; to put it a simple way, it is the CPC that has a clear dual-goal for the time being and for the incoming future. It is echoed in President Xi's speech that the spreading of Marxism and leadership of CPC have made China's pursuit of truth and progress unstoppable.

From then on, Marxism has become modern China's state ideology, part of the national story of redemption from humiliation by foreign powers. Guided by Marxist ideology, the Communists defeated the Japanese and the Nationalists to found the People's Republic in 1949. Then the party navigated the treacherous eddies of economic development, international competition, and political infighting to bring China to the current status today.

In so doing, its leaders and cadres developed a set of political practices that go beyond—even replace—the doctrine of class struggle.

Such practices can keep cadres' power in check, encourage feedback from society to correct policy, and provide the state with the resources to get things done. Thus, one hundred years ago, people may say it was Marxism that saved China; one hundred years later, perhaps it is just about the time to say it is China that would save and preserve Marxism and socialism for the entire human being.

How can the youth today better carry the torch from the pioneering students a century ago then? President Xi has highlighted that patriotism is the key to the May Fourth movement. A century ago, the young students have started a social revolution desiring for an independent and strong country, which eventually led to a modern nation-state.

While striving for personal fulfillment, President Xi has pointed out that young people should "bear the responsibility of the era" as they represent the future and hope of a country. The "revolution" may have never ended because today's youth are facing no less pressure to undertake the task of realizing national rejuvenation. Perhaps that's also one the most important part of the legacy of the movement: to be always at the forefront and fight to achieve the task of the era.