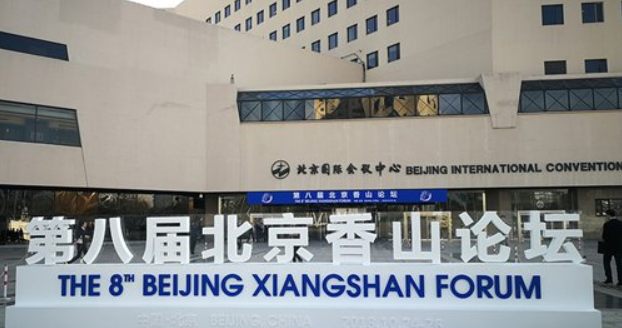 Li Zhanshu, chairman of the National People's Congress Standing Committee, said on Wednesday in Beijing that unilateralism is a "withdrawal from international groups" and disregard for the interests of other countries and peoples."Some countries outside the South China Sea have frequently sent large warships and strategic bombers to the waters to flex their muscles, which threatens regional security. This is not only a typical militarized move, but the largest driving force for militarization in the region," Li said on Wednesday.Li, who is also a member of the Standing Committee of the Political Bureau of the Communist Party of China Central Committee, made the remarks at the reception and opening banquet of the 8th Beijing Xiangshan Forum. His speech covered hot issues including the China-US relationship, the Korean Peninsula issue, South China Sea issue and the Taiwan question.The forum will open on Thursday. Chinese Defense Minister Wei Fenghe will deliver a keynote speech and read a congratulatory letter from Chinese President Xi Jinping at the opening ceremony.On the Taiwan question, Li said Taiwan's independence force is the biggest threat to peace and stability in the Taiwan Straits, and "some countries have taken a series of wrong measures" to encourage Taiwan independence and this has damaged the peace and stability of the Taiwan Straits and the whole region. "The international community must be on high alert to this," Li said. On China-US relations, Li noted that cooperation will benefit both countries, and confrontation will only bring harm. On the Korean Peninsula issue, Li said that "the US should make a positive response" and meet North Korea halfway.  The Beijing Xiangshan Forum aims to increase trust and resolve doubts, build consensus and expand cooperation. Since its establishment, it has gradually developed into an important high-end defense and security dialogue platform in the Asia-Pacific region, Li said. Wang Dong, deputy secretary-general of the American Studies Center at Peking University who is attending the forum, told the Global Times on Wednesday that "Li's remarks are an authoritative and broad explanation of China's views on international security and diplomacy, and the reason why China has made remarkable achievements in the past four decades through opening-up and reform."For 'win-win cooperation'Formerly known as the Xiangshan Forum, the event was first launched in 2006 and aims to promote exchanges and cooperation among defense authorities and armed forces of various countries, international organizations and scholars. It is co-hosted by the China Association for Military Science (CAMS) and China Institute for International Strategic Studies (CIISS). This year's theme is "Building a New Type of Security Partnership of Equality, Mutual Trust and Win-Win Cooperation," according to the forum's website. More than 500 representatives from 67 countries and seven organizations will attend this year's Beijing Xiangshan Forum, event organizers said Monday.Officials and scholars will focus on issues such as global security governance, terrorist threats and countermeasures, maritime security cooperation and UN peacekeeping.Forum discussions will include Northeast Asian security, Middle East issues and artificial intelligence. Seminars for young officers and scholars will also be held.