Unrest spreading across the world exposes crisis of neoliberal model 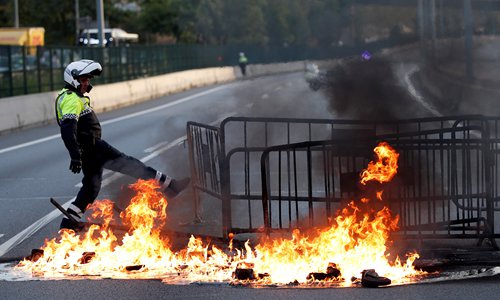 Recently, there have been riots in Chile, uprisings in Ecuador, chaos in Spain, and strong unrest in Greece, not to mention France, where the so-called yellow vests have paraded in all the major cities.

Within a few months, a growing number of crises have revealed the internal contradictions of a political and economic order that however structured, is increasingly struggling to guarantee its own survival despite the support it enjoys from powerful international organizations such as the World Bank and the International Monetary Fund.

Although they originated from radically different causes, the upheavals that have taken place in Europe and America show the detachment between the people and the apparatuses of power - the political and economic establishment - which govern the Western nations according to the neoliberal paradigm. Ordinary citizens now tend to feel less and less represented because they see their basic needs are not being satisfied.

All Western nations converted to the canons of the Washington Consensus immediately after the fall of the Berlin Wall, the combination of deindustrialization, liberalization and privatization in the context of an overall downsizing of the role and the prerogatives of the state has fueled processes of centralization of wealth and an increase in the inequalities that have eroded social balance. The result has been a sharp increase in social tension, with consequent exacerbation of local problems related to the history and peculiarities of each individual nation. Specific issues such as Catalan independence have been strengthened, which has further put the system's self-preservation capacity under strain.

Given the increasingly obvious difficulty of solving the problem by resorting to the conventional means at its disposal, the system did not hesitate to show its "dark side" by taking a strongly authoritarian drift, as well as trying to shift the general attention from itself to rival countries, such as China, which has been accused by some Western politicians of having suppressed the demonstrations in Hong Kong.

Former US vice president Joe Biden called rioters in Hong Kong "brave people" who "deserve the full support" of the US on Twitter on October 1.

Interference and exploitation by Western governments have overshadowed what is likely to be the main motor of protest: the constant increase in inequalities. In fact, Hong Kong represents, in addition to a crucial financial and economic center, a special administrative region populated by almost 7.5 million inhabitants that have an average income six times higher than the rest of the nation, but also a level of economic and social disparities that are among the highest in the world.

The Gini index for Hong Kong has reached 0.539, the highest for 50 years, which is a sign that the growth experienced by the former colony has not been accompanied by an equitable redistribution of income, but rather by a thinning of the local middle class and a growing spread of poverty.

Hong Kong is going through a process of concentration of wealth typical of economic systems imposed in the West, and this may produce repercussions even more harmful because they occur in a geographic space marked by a perennial real estate boom and an exceptionally concentrated real estate market that is dominated by a few developers.

Dissatisfaction due to rising income inequality has been growing among Hongkongers until it took the form of a social movement like that in France, Chile, and Spain. In other places with a Western political system, an effective solution is slow to emerge because of partisan struggle and hurdles put up by opposition parties.

Western politicians call the unrest in Hong Kong a struggle against Beijing, making it harder for Hongkongers to find a way out.