Upgrading Quad and Malabar exercise shows US anxiety about China 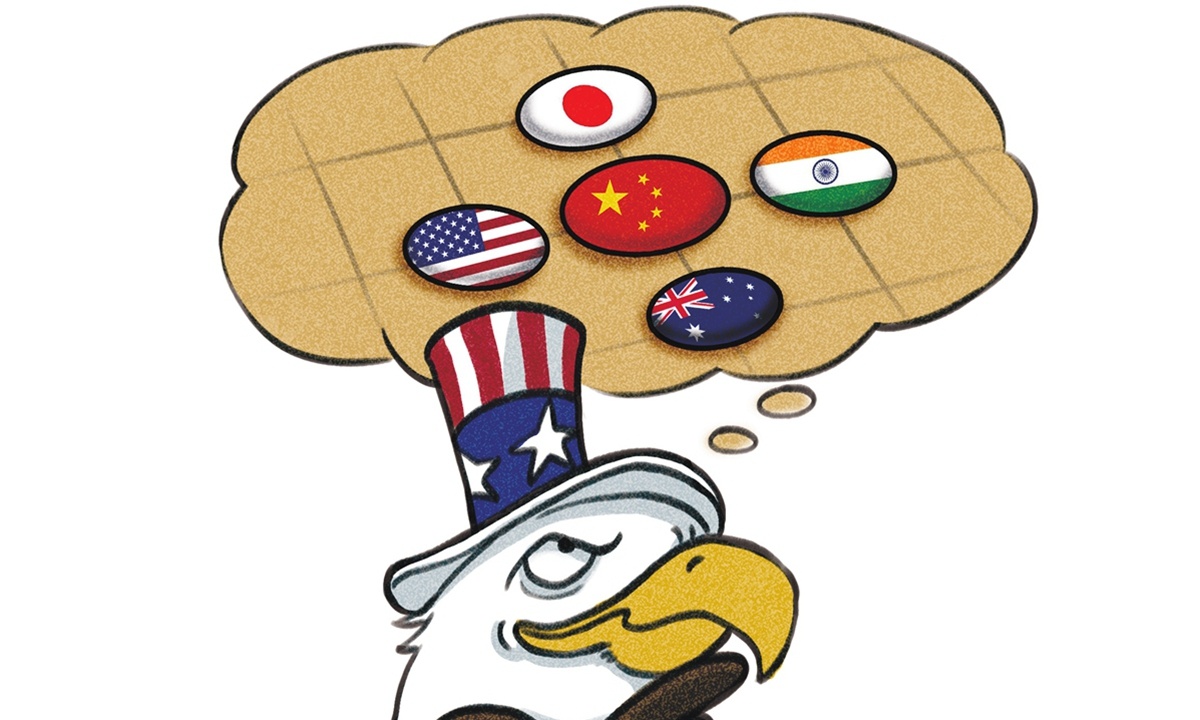 The four Quad countries - India, the US, Japan, and Australia - will conduct the Malabar 2021 exercises off Guam in the Western Pacific later this month. The Malabar exercise started in 1992 as a bilateral military exercise between the Indian Navy and the US Navy in the Indian Ocean. Japan has been participating in this drill annually since 2015. In 2020, India invited Australia to take part in the annual exercise, making it a drill among the Quad navies.

As a routine joint military exercise mechanism led by the US, the Malabar drill has actively undergone transformation in recent years. This indeed reflects some new trends in the current US maritime strategy. Washington aims to strengthen maritime cooperation with allies and strategic partners, flexing muscles against China and demonstrating its deterrence capabilities and determination. This also reflects Washington's consistent strategic intention in recent years - to enhance its conventional deterrence capability against China by uniting allies and strategic partners.

On April 30, US Defense Secretary Lloyd Austin addressed the change of command ceremony for the US Indo-Pacific Command. At this event, he proposed a new approach as an "integrated deterrence." "We'll use existing capabilities, and build new ones, and use all of them in networked ways - hand in hand with our allies and partners," he said.

The US is eager to unite allies and partners, which reflects its strategic anxiety. After the 1995-96 Taiwan Straits crisis, China tried to develop key weapons to deter the US. At that time, the US was still able to deter China through its powerful conventional military forces. But with the advancement of China's military modernization over the past two decades, China has fully caught up with the US in terms of conventional military forces. However, the US' conventional deterrence capability in the Western Pacific has relatively declined. It has been critically questioned by US allies and partners, China, and even by many within the US.

Therefore, Washington is eager to find a solution. It believes a decline in its conventional deterrence capabilities will encourage Beijing to take adventurous actions. Based on such a judgment, Washington thinks it must strengthen its conventional deterrence capabilities. To achieve this goal, the US has no other choice but to unite and rope in its allies and strategic partners, as well as to strengthen security cooperation among key allies and strategic partners. Against this backdrop, the US has chosen to strengthen the Quad mechanism by transforming and upgrading the original US-India bilateral naval drill into a quadrilateral joint military exercise.

As the US keeps promoting its Indo-Pacific Strategy, the Quad mechanism has continued to deepen cooperation in the security field and made great progress in joint military exercises and intelligence sharing. This has indeed brought some strategic pressure to China.

However, the cooperation between Washington and its allies and partners in the security field should not be exaggerated, and it would be inaccurate to claim that the quadrilateral mechanism is becoming NATO-like. The US will undoubtedly continue to strengthen its security cooperation with India, Australia, and Japan to counterbalance China, but we need to see the limitations of the US strategy.

On the one hand, the strengthening of the Quad mechanism reflects the fact that China's military growth is for sure putting enormous external pressure on the US in the Indo-Pacific region. This has worried the US strategic community. As a result, Washington has taken aggressive defensive measures to counterbalance Beijing. On the other hand, India, Australia, and Japan have their own interests in security issues. Washington cannot have a monopoly on the Quad mechanism, even though it is led by the US.

As for China, there is definitely a need for it to counter the US' strengthening of the security cooperation among the Quad countries. However, we should also look at it in a normal way, and not be overly nervous. It is expected that China's military power will grow steadily. The Quad countries need to take such a reality into account as a constant factor. For China, it is crucial to seek a balance between controlling external pressure and responding to it.

The author is a research fellow at the National Academy of Development and Strategy, Renmin University of China.