OPINIONS US ability to curb virus in doubt

US ability to curb virus in doubt 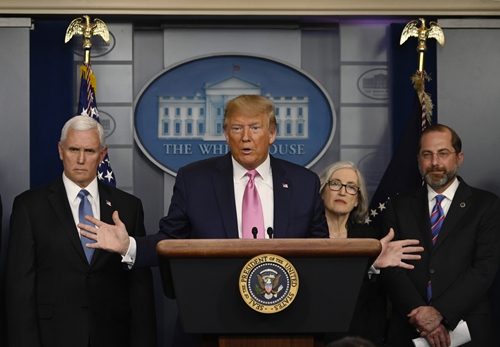 The US might not be able to effectively contain the outbreak of novel coronavirus, or COVID-19, as the White House and the Center of Disease Control and Prevention (CDC) have different perspectives of the situation, and President Donald Trump's priority is still the economic data and the presidential election, said Chinese experts on Thursday.

Without sincere cooperation with China and other countries that have been affected, and without a scientific basis on the situation, the outbreak in the US might cause serious damage, experts warned.

"The risk to the American people remains very low," Trump said at a press conference on Wednesday, as he unveiled his big announcement: Vice President Mike Pence will head the government effort against COVID-19, CNN reported.

Trump's optimism came hours before the CDC said a patient in California might be the first person to be infected who did not travel to an afflicted region and was not exposed to another known carrier. The case raises the possibility that the virus is already moving through the community.

Zhang Weiwei, a professor and director of the China Institute of Fudan University in Shanghai, told the Global Times that based on the experience of H1N1 in 2009, it is clear that the US political system is unable to effectively contain the disease outbreak as it cannot mobilize the cooperation between different states within the US and it has no sense of responsibility to minimize the impact to other countries, and that's why H1N1 in 2009 led to more than 14,000 deaths in over 200 countries.

"The most that the US government can do for disease control is to inform the people, and supply more materials to hospitals to cure critical patients, it doesn't have the top-down management and cooperation ability, which allows government and the people to jointly contain human activities," Zhang said.

However, Trump criticized two US media on Twitter on Thursday that "low ratings fake news MSNBC and CNN are doing everything possible to make the caronavirus [wrongly spelled] look as bad as possible…"

Lü Xiang, a research fellow on US studies at the Chinese Academy of Social Sciences in Beijing, told the Global Times that "apparently, Trump's priority right now is still the presidential election and economic data is the crucial index that could affect the election. He doesn't want the stock market to be impacted by the outbreak."

But the concerns that the CDC and the WHO expressed are more credible and should be treated seriously, and no matter what Trump said, the stock market has already been impacted, said Lu.

US medical data shows that the situation is not very optimistic as well. Health and Human Services Secretary Alex Azar told senators on Tuesday that the US "could need 270 million more face masks to fight the coronavirus at home," with only 30 million stockpiled.

So without sincere cooperation and information sharing with other countries, including China, and without a scientific attitude to deal with the situation, the damage to the US could be huge, and if the US gets seriously impacted, the world economy in 2020 will be in big trouble, Lü said.