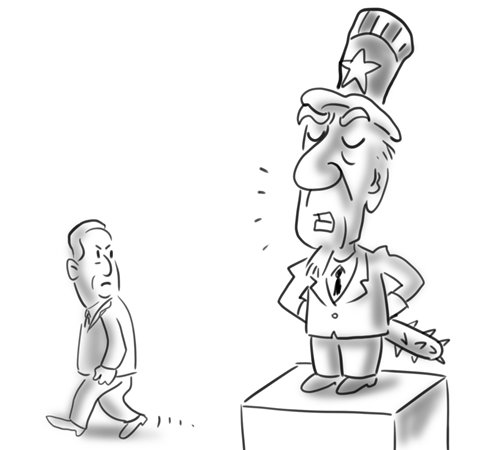 The US has long been disappointed with some Southeast Asian nations, especially in the recent period. The New York Times recently published an article headlined "Embracing China, Facebook and Himself, Cambodia's Ruler Digs In," claiming "[Cambodian Prime Minister] Hun Sen's authoritarian descent reflects an overall retreat of democracy across Southeast Asia." On February 27, the White House announced that it was cutting $8.3 million of aid programs to Cambodia. It mirrored US disappointment and dissatisfaction with the level of democracy and the values of some Southeast Asian countries. Southeast Asian nations including Cambodia are also disappointed with Washington, while Washington remains indifferent.Dependence and defiance are the two major mind-set Southeast Asian nations have toward Washington. During Barack Obama's presidency, such sentiments were incredibly obvious. In Obama's first tenure, Washington made frequent moves on its rebalance to Asia-Pacific strategy. The setup of the US Ambassador to the Association of Southeast Asian Nations (ASEAN) as well as the establishment of a US-ASEAN Leaders Summit marked the two sides' honeymoon.This met some Southeast Asian nations' expectations of the US. They do not want Washington to withdraw from the region. But after the honeymoon, both the US and ASEAN started to lose hope in one another. Americans touched a sensitive nerve of Southeast Asian countries by repeatedly interfering in the latter's internal affairs with phrases like "human rights," "ethnic and religious relations." When it comes to strategic objectives, the US goal of maintaining its dominant position in Southeast Asia is inconsistent with the regional powers' aim to keep the balance among major powers in the area through US presence. In practice, Washington failed to respect ASEAN and even coerced ASEAN into submission. Not only that, US moves seeking to expand influence in the region have also led to an imbalance in the power structure. The increasingly fierce game among major countries made Southeast Asian nations feel threatened.After Donald Trump assumed office, he did not put an end to such mutual disappointment. He intensified it. Washington has not changed its traditional approach of connecting its aid for Southeast Asia with human rights and democracy. Take Cambodia. Hun Sen's administration has never been favored by Washington. The US has long wanted to overthrow it with a pro-US regime through Western-style party rotation and election. It is a trick the US often plays. Undoubtedly Southeast Asian countries have an aversion for it. But such an approach does not work every time. For instance, Myanmar State Counselor Aung San Suu Kyi was once regarded as a goddess of human rights. The Western world used to hope that she could boost US influence in the country after she took office. Washington was let down.Southeast Asian nations cannot find any hope in the US from America First and Make America great again. Trump's government has also found that those small ASEAN countries have neither the will nor the ability to help the US make America great again.The mutual disappointment is growingly obvious and cannot be dispelled anytime soon. After all, no one likes the arrogance of America First and the US tradition of lecturing others on their own domestic affairs.