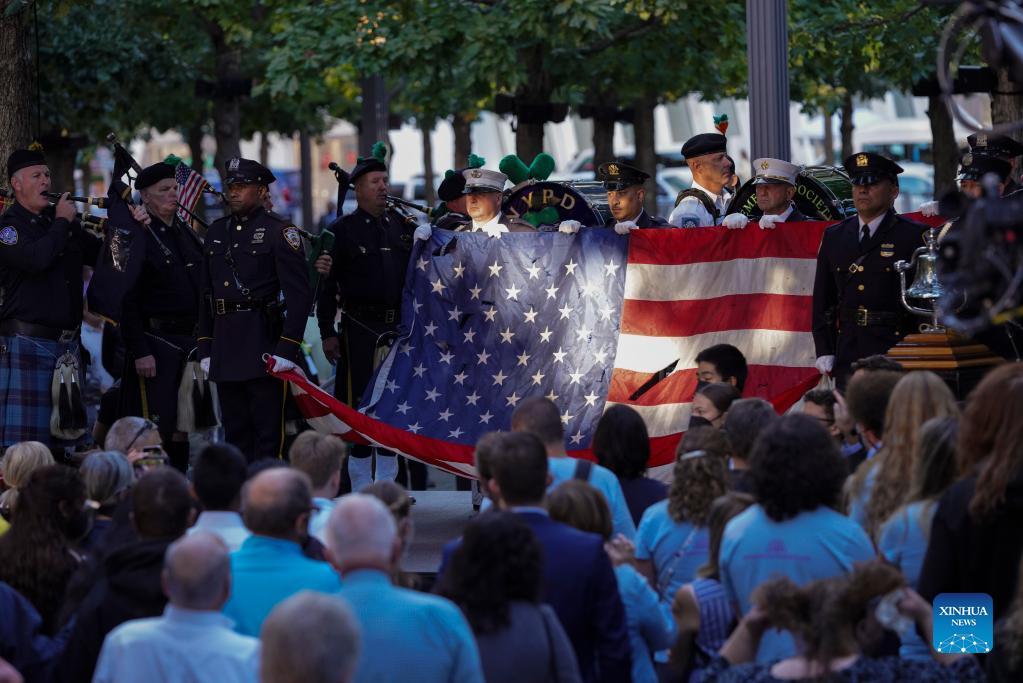 A US national flag is shown by a guard of honor during a commemoration ceremony of the 20th anniversary of the 9/11 attacks in New York, the United States, on Sept 11, 2021. (Photo: Xinhua)

No matter what the issue is, whether it be terrorism, the COVID-19 pandemic, cybersecurity or climate change, the United States always seeks to fortify its hegemony when responding to any global challenge.

It is this intention that always renders its efforts futile and results in tremendous sacrifice for itself and others. That explains why the US has failed in all of the four aforementioned fields. It invariably adopts unilateral ways to resolve issues that can only be tackled in a multilateral manner with close cooperation and coordination.

The 20th anniversary of the 9/11 terrorist attacks undoubtedly presents an ideal occasion for the US administration to reflect on the lessons of its failures. Afghanistan seems to many to have returned to where it was 20 years ago before the US launched its war against terrorism, which has been waged at the cost of more than $8 trillion and claimed 929,000 lives. And the rise of the Islamic State group in the past decades thanks to the wars the US started and backed in Afghanistan, Iraq and Syria poses serious threats to the world today.

The hidden motive behind the anti-terrorism wars waged by the US means that what it has been truly fighting is not the terrorists per se but threats to the US' geopolitical interests in a region. That has resulted in Washington not hesitating to support those, including terrorists, that it believes can cause trouble to regimes it dislikes. That has been its modus operandi in Iraq, Syria and now in China's Xinjiang Uygur autonomous region.

The unilateral approach the US adopts to address global challenges only aggravates the crises as it prevents the global solidarity being forged that is necessary to truly address them.

The 9/11 incident prompted the United Nations to set up special departments that should have served as the platform to synergize global efforts and coordinate international actions to deal with terrorism. China and many other countries have called for joint endeavors to eliminate the soil for terrorism by promoting common development and fairness in international governance. Instead, the US thinks itself an exception, and thus it always puts its own interests above those of others rather than looking at issues holistically. It will then blacklist any party questioning its true motives.

In order to maintain the US hegemony, Washington persists with its tested-and-failed unilateral counterterrorism efforts. It feels no qualms about the suffering it causes or that it is wasting the opportunities to narrow the development gaps and deal with terrorism at the same time.

That US President Joe Biden reportedly pulled the US out of Afghanistan to enable the US to better focus on tackling China and Russia has made it unequivocally clear that maintaining the US hegemony is Washington's primary objective.

That said, as long as the common challenges are of strategic value to fostering the US hegemony, Washington has no desire to resolve them. Instead, it will continue to simply play up the righteousness of these causes to disguise what it is doing and maintain the pretense that it is acting for the common good.