OPINIONS US avoiding answering questions by deflecting attention onto China

US avoiding answering questions by deflecting attention onto China 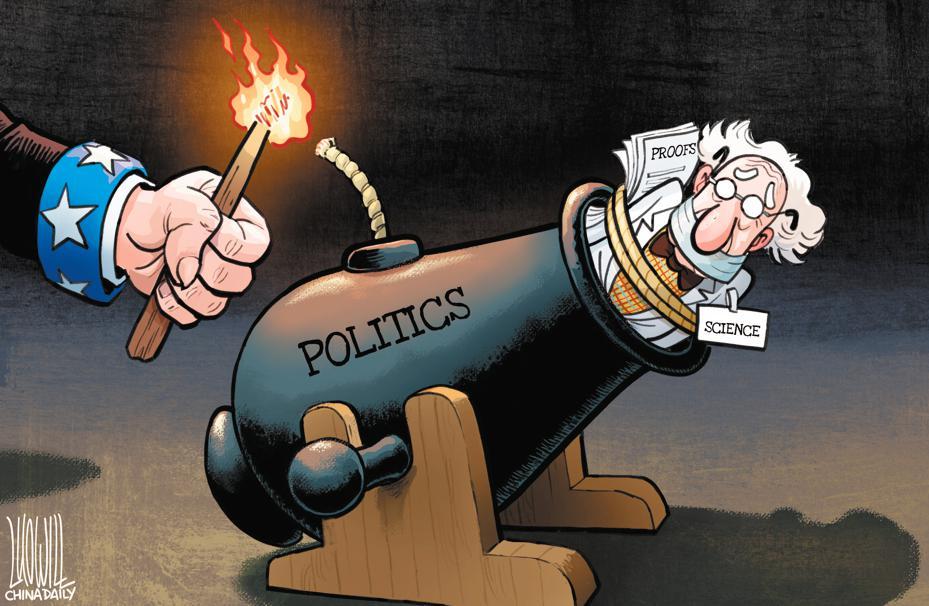 In more than four weeks of field research in China earlier this year, a team of World Health Organization experts visited nine key sites and spoke with numerous Chinese experts, as well as medical professionals and people in communities in Wuhan, the city where novel coronavirus infections were first identified. Having obtained large amounts of data and information, the team was fulsome in its praise for the support that China had given them and their research.

The report the WHO released on the research results in March concluded that it was extremely unlikely the virus had leaked from a lab, which should have put an end to Washington's insistence that the Wuhan Institute of Virology is the origin of the outbreak.

Unfortunately, that has proved not to be the case. Instead, the US administration has been even more vociferous in apportioning blame to China and the lab. And having reversed the decision of his predecessor to withdraw the US from the world health body and stop paying its dues, US President Joe Biden's campaign appears to have press-ganged a new recruit in the form of the WHO.

Speaking on Friday, WHO Director-General Tedros Adhanom Ghebreyesus said that getting access to raw data had been a challenge for the international team that visited China, and there had been a "premature push" to rule out the theory that the virus might have escaped from a lab.

Perhaps the thinking within the WHO－like that of many－is the virus came from the US' known-to-be-leaky Fort Detrick biological weapons research lab. However, the WHO chief's drastically different stance on the field study and the WHO's proposal that a second-stage investigation into the origin of the virus should include further studies in China and an "audit" of the Wuhan lab－even before any field studies have been conducted in the US and elsewhere－suggests the world health body has succumbed to political pressure from the United States and its allies.

In a news conference in Beijing on Thursday, Zeng Yixin, vice minister of the National Health Commission, rejected the WHO's plan to conduct another COVID-19 origin tracing study in China.

That should be taken as China's official reply to the proposal, which is fully justified given the plan contains language that doesn't respect science, and there are sufficient clues and evidence that the virus was circulating in various countries before it was identified in Wuhan, which need to be investigated first.

As the WHO field team acknowledged, China has set a good example with the support it gave the origin-tracing efforts. If all countries, particularly those hard-hit countries, were to share their data and cooperate with the WHO as earnestly as China has, and were as transparent in their handling of the virus, it might be possible to determine where and how the virus made the jump to humans. But don't hold your breath waiting on the US.