US’ calculation on tariffs misguided: analysts 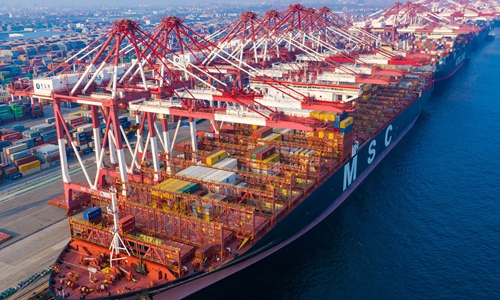 Containers to be loaded on vessels for export at Qingdao Port in East China's Shandong Province on November 5 (Photo: IC)

Apparent reluctance among US officials to remove tariffs on China to help vast US businesses and consumers cope with the economic fallout of the coronavirus pandemic on concerns that such a move would benefit China more is misguided, and will undoubtedly cripple US firms at such a difficult time, Chinese analysts stated on Monday.

The tariffs have cost US companies hundreds of billions of dollars and could push many businesses into bankruptcy, as many have been forced to shut down or face strangled cash flow due to the epidemic, analysts noted, adding that whether Washington decides to suspend the tariffs or not, does not change China's focus on reviving the domestic economy and consolidating a rising role in the global supply chain.

As the epidemic continues to spread rapidly across the US and seems to freeze economic activities and the stock market, many US lawmakers and businesses are urging US President Donald Trump to suspend the punitive tariffs on China and other countries, arguing such a move would be a very direct and effective way to help businesses cope with the virus.

Several US businesses groups, including the National Retail Federation, wrote a letter to the White House on Friday, arguing that removing tariffs "would instantly put billions of dollars back into the US economy," according to the New York Times.

Despite Trump's repeated claims that China pays for the tariffs, US businesses are the ones picking up the lion share of the cost, analysts noted. Over the past 20 months, the tariffs on Chinese goods cost US importers $48.1 billion, Reuters reported on Friday, citing US official data. The US still imposes tariffs of up to 25 percent on $370 billion worth of Chinese goods.

However, "the US has never been rational since the beginning of the trade war, which is aimed at containing China's rise," Sang said, noting that the chance of the US removing tariffs is "slim."

The rising calls for Trump to remove tariffs have encountered strong pushback from anti-China hawks, who argue that removing tariffs would give China an advantage to rise in the global supply chain. So far, President Trump is leaning toward keeping the tariffs.

Li Yong, a deputy chairman of the expert committee of the China Association of International Trade, also said that the US is unlikely to suspend all tariffs because "the tariffs" go beyond trade and economics to other longer-term objectives of the US to contain China.

"There are more reasons for the US to remove the tariffs… but it remains to be seen whether the US could make the decision that benefits itself, China and the world," Li told the Global Times on Monday.

But as the epidemic has shown, China' s role in the global supply chain remains irreplaceable, despite the US's relentless trade war, said Bai Ming, deputy director of the Ministry of Commerce's International Market Research Institute.

"If the tariffs were kept in place, it would certainly exert pressure on China, but that is within our expectation and does not change our focus to jumpstart the domestic economy and further consolidate our position in the global market," Bai told the Global Times on Monday.

Despite the growing debate in the US over the tariffs, Chinese officials have repeatedly vowed to carry out the phase one deal and they remain fixated on reviving the domestic economy, including measures that guide trillions of dollars of investment in 5G, artificial intelligence and areas that officials and analysts believe would put China ahead.