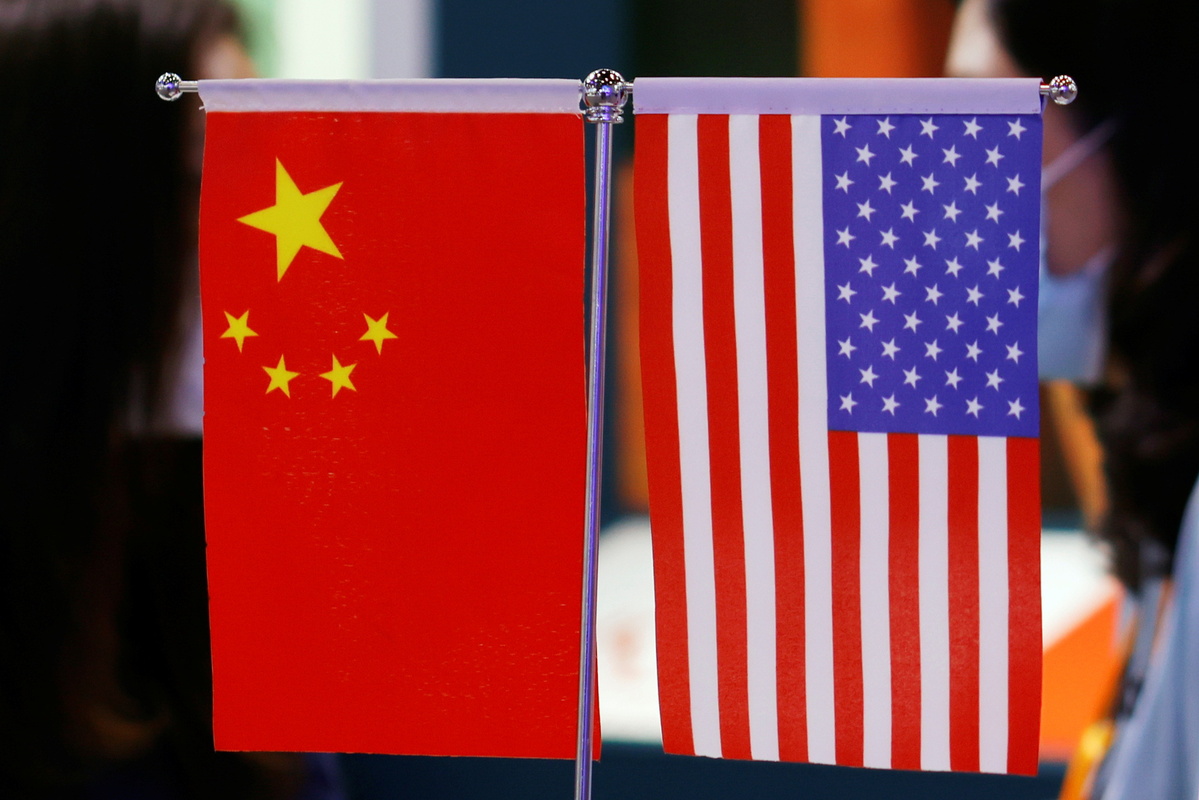 Staff members chat behind Chinese and US flags displayed at the 2021 China International Fair for Trade in Services in Beijing, on Sept 4, 2021. [Photo/Agencies]

As chair of the Association of Southeast Asian Nations for 2022, Cambodia announced on April 18 that ASEAN and the United States will hold a special summit in Washington on May 12-13 to commemorate 45 years of ASEAN-US relations. The second special summit since 2016 will be the first in-person meeting of ASEAN leaders since 2017.

In fact, the United States had unilaterally announced in February that it plans to host the summit on March 28-29, but the summit was deferred due to an apparent scheduling rift between the two sides. At one point, ASEAN leaders were exasperated because of the several changes in schedule.

According to the statements issued by Cambodia and the US, ASEAN leaders and US President Joe Biden will meet to discuss ways and means to deepen cooperation in areas such as COVID-19 response and global health security, climate change, sustainable development, maritime cooperation, human capital development, education and people-to-people exchanges, as well as connectivity and economic engagement.

And Phnom Penh said that "during this historic meeting, the leaders of ASEAN and the United States will chart the future direction of ASEAN-US relations".

In order to understand how the summit will chart the future of ASEAN-US relations and why the US wants to host the summit, it is necessary to review the engagement between their leaderships. In 2009, Barack Obama became the first US president to meet all leaders of all the 10 ASEAN member states together in Singapore, and hosted the first US-ASEAN summit in the US in 2016.

Former US president Donald Trump attended the 2017 summit in Manila but skipped ASEAN meetings for three consecutive years, signaling Washington's "disengagement" with Southeast Asia, perhaps, as he saw the ASEAN members as chess pieces in the major-power rivalry.

In stark contrast, China participated in all the meetings with ASEAN members in order to boost stable ties, setting an example in regional cooperation. Last year, President Xi Jinping delivered a speech at the Special Summit to Commemorate the 30th Anniversary of China-ASEAN Dialogue Relations in Beijing, stressing that China will continue to accord high priority to ASEAN in its regional diplomacy, unswervingly support ASEAN unity and ASEAN community building, and always support ASEAN centrality in the regional architecture and ASEAN playing a bigger role in regional and international affairs. Xi also said China wishes to build a peaceful, safe, secure, prosperous, beautiful and amicable home together with ASEAN member states.

The alliances established by the Biden administration in the Asia-Pacific region are threatening the ASEAN-led cooperation mechanism. It is clear that Southeast Asia is at the heart of the US' new Indo-Pacific strategy, which the Biden administration "updated" in February. It is also clear that Washington has failed to sow the seeds of distrust in ASEAN members in its bid to contain China.

True, the US strategy toward ASEAN has promoted regional prosperity, but it has also raised tensions in the region.

In particular, after a slow start, the Biden administration has sent a number of senior officials to visit Southeast Asia since mid-2021 to improve the US' ties with ASEAN members. And in line with the US administrations' policy of forcing ASEAN members to choose sides between the US and China, the new US Indo-Pacific strategy doesn't explicitly endorse the "ASEAN Outlook".

Take the Australia-UK-US alliance (AUKUS), aimed at strengthening the US' presence in the Asia-Pacific region, as an example. Many ASEAN members see the enunciation of AUKUS as increasing the geopolitical risks and a challenge to ASEAN centrality. So the US could discuss the relationship between its regional security mechanisms and ASEAN members during the Thursday-Friday summit.

On the economic front, perhaps the US will reveal a new Indo-Pacific economic framework at the summit. But ASEAN member states are more concerned about a clear trade and economic agenda for the region rather than rhetoric, which could force the US to rethink its policy of promoting regional economic development.

ASEAN members know it is not easy to establish a peaceful ecosystem given the regional crisis and conflicts, so they have adopted a cautious approach when it comes to dealing with China and the US.

Therefore, the US would do better to heed the concerns of relatively small countries during the summit, especially because ASEAN members are reluctant to take sides on sensitive global issues. And since the US cannot force any major changes in ASEAN, it should support ASEAN to lead regional cooperation and balance the power equation between major countries.

Hopefully, the summit will make new achievements for the benefit of the Asia-Pacific.