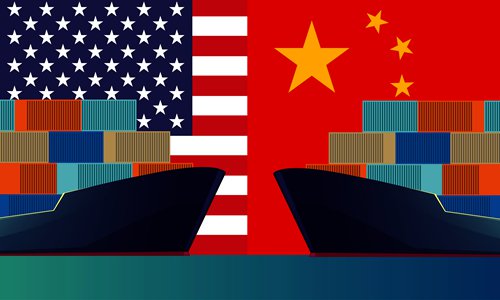 The US has once again disparaged the Chinese economy to entertain itself. US President Donald Trump on Saturday claimed China's supply chain was "all broken, like an egg," and said China wanted a deal more than the US did.

The fact is, however, senior US officials are talking about trade wars and trade deals almost every day, while Chinese officials rarely do this. Anyone who knows a little bit about psychology can figure out that such responses of the US reflect anxiety, rather than calmness.

Is China's supply chain broken like an egg? Chinese telecom giant Huawei has not begged the US to be "magnanimous." It is now US companies that are asking to be excluded from US restrictions.

Being placed in the Entity List has certainly caused difficulties for Huawei, but such hardships are far from delivering vital blows to fling the company down. Some US elites are clamoring for knocking Huawei down, but their indecent acts have only stimulated Huawei's strength and growth. And Chinese people generally believe that this high-tech company will be increasingly strong.

The US cannot even defeat one Chinese enterprise by making full use of its whole country's power. Now it is claiming it will break the supply chain of all of China as an egg. Is such bragging too exaggerated? We wonder how the public opinion and voters in the US can tolerate such a boast. The voters are seemingly quite gullible.

The US is suffering an economic downturn, and many indicators demonstrate that its good days are coming to an end. US state leaders and senior officials are like cheerleaders, taking turns to cheer up the stock index.

In terms of economic situations, Chinese officials' description is absolutely more objective and calm than the US side. China recognizes that the trade war has brought negative impacts, and our efforts to eliminate such effects are open and timely. The US, however, is trying to cover up the effects of the trade war it has launched.

China has already focused its efforts on solving its own problems. We will not bet on the idea that reaching a deal will fundamentally change China-US economic relations. Most Chinese believe that whether there is an agreement or not, turmoil between the two countries will not end. Chinese society is in favor of reaching a trade deal, but it is also patient.

Including Chinese companies such as Huawei in the Entity List will cause long-term damages to US business community's reputation. Foreign companies may be on guard against US enterprises in the future while building their own supply chains, which will certainly offer more opportunities for US competitors.

The US is so keen on imposing sanctions, and is fond of applying sanctions on related third-parties. Betting on US companies may work in a short term, but cannot serve as a long-term strategy. The US has trodden business ethics under foot in this round of China-US games. It is even pleased with itself for overtly destroying China's supply chain. At the strategic planning in the US, there are no such concepts like honesty and morality. The Chinese society has clearly observed this, as has the entire world.

Fortunately, China has the widest range of manufacturing sectors in the world, which has given the country a special strength in the global supply chain. China is not afraid of any game against the supply chain. Producers without China's supply chain will certainly feel more pain than China.